The cinematographer for the movie was William A. Fraker, whose list of credits include SpaceCamp, The Island of Doctor Moreau, WarGames, 1941, The Exorcist II, Vegas Vacation, and Tombstone.

The music for Street Fighter was composed by Graeme Revell, who also provided music for The Fog, Freddy vs. Jason, Daredevil, Red Planet, Blow, and Spawn, among many others. 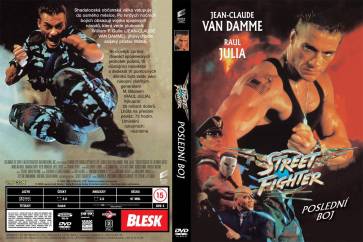 The plot of Street Fighter is pretty basic, and summarized on IMDb as follows:

Col. Guile and various other martial arts heroes fight against the tyranny of Dictator M. Bison and his cohorts.

Essentially, Bison is a dictator of a fictitious foreign country, where he has built a highly technological army that threatens the world at large. A number of different parties, all with different motivations, all converge with the goal of deposing him.

Another Street Fighter film adaptation was made in 2009, called Street Fighter: The Legend of Chun Li. The goal was for this movie to contrast with the 1994 effort by being far more serious in tone. However, it proved to be even less well-received, and even had lower grosses than the original.

The Street Fighter video game series debuted in arcades in 1987, but became huge in the 1990s with the release of Street Fighter II, and cemented the franchise as one of the elite fighting video games, alongside the more violent and graphic Mortal Kombat.

Interestingly, the production of Street Fighter happened almost concurrently with the film adaptation of its key rival franchise, Mortal Kombat, which released in 1995. Reportedly, Van Damme even turned down the role of Johnny Cage in that movie due to his involvement with Street Fighter.

Hilariously, there were two different official Street Fighter: The Movie video game adaptations: one was made explicitly for arcades, and another was produced independently for the home console systems Sega Saturn and PlayStation. These games featured the vague likenesses of the actors from the feature as their characters.

Raul Julia sadly died soon after he finished filming for his role in Street Fighter, making it his last film appearance. Even during filming, he was suffering from his cancer, which limited his ability to perform in action scenes.

Street Fighter was made on a production budget of $35 million, on which it grossed just shy of 100 million in its lifetime global theatrical release. In spite of that profitability, the reception to Street Fighter was overwhelmingly negative: it currently holds a 3.7 user rating on IMDb, alongside Rotten Tomatoes aggregate scores of 12% from critics and 20% from audiences.

Personally, I don’t hold any ill feelings towards this movie whatsoever. It doesn’t take itself very seriously, and there are some solid humorous moments interspersed with the naturally over the top and ridiculous action story, which I welcomed. The fact that the video game is basically plot-less left a lot of wiggle room for how to construct this movie, and what they came up with is something that I don’t think is half bad. Some fans were clearly unhappy with some character changes that were made to fit them into the confines of the story, but at the same, there was a lot of attention put into making sure the characters at least looked their parts, which I appreciated.

Most people note Raul Julia as an obvious highlight of this movie, and I absolutely agree. He has some highly memorable lines, looks iconic in the role, and manages to even slip some humor into a role that is absolutely straight and iron-faced. However, I think the good performances go beyond just him: I actually like JCVD in this picture as well. He looks on top of his game, and gets a couple of hammy moments of his own in the movie. The rest of the cast is a bit of a mixed bag, though I personally loved the comic relief portrayal of Zangief and the duo of Ryu and Ken, which were all criticized by many.

Trying to nail down what the problem was with this movie isn’t easy. I think the failure had more to do with the world not knowing what it wanted from this movie than anything else. Were fans expecting a serious, gritty action picture? That wouldn’t be at all in the spirit of the cartoonish video game, with has distinguished itself from Mortal Kombat by being more colorful and flamboyant, as opposed to gory and brutal.

The one thing I do wish was incorporated into the movie was some of the music from the Street Fighter game, which is outstandingly memorable, particularly Guile’s Theme. How awesome would it have been for an orchestrated version to have been included in one of the battles?

As it stands, Street Fighter was a very early video game adaptation, before the concept became a doomed proposition. And, honestly, I think it is one of the better ones out there. There is certainly way more to enjoy in this silly movie than there is in any of Uwe Boll’s litany of video game adaptations, and I think this one might be worth a nod over Mortal Kombat as well (though that is debatable). I think this is honestly a fantastic good-bad movie watch, and nails action humor better than your average movie that attempts it. Fans of the games should appreciate the pandering via the inclusion of so many characters as well, who are surprisingly well-weaved into the movie if you ask me.

You don’t have to look very far to find other thoughts about Street Fighter: it seems like every person in the bad movie reviewing game has taken it on at some point. I recommend going through the lot of them, because there is quite a lot of variety in the thoughts on this movie, and a whole lot of backstory to read into about it as well.