I’ve finally finished my holiday vacation, and gleefully returned home to my War on Christmas present to myself: 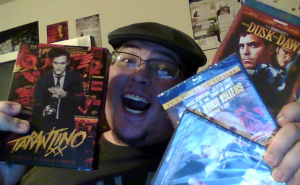 That is a big ol’ collection of Tarantino movies. In the XX set alone are his mainstays: Jackie Browne, Pulp Fiction, Reservoir Dogs, Inglorious Basterds, both Kill Bills, and even Death Proof and True Romance.

In my other hand are the less favorite sons, some of the illegitimate ilk of the Tarantino canon. I could write the praises (and occasional gripes) of the classic Tarantino films, but I’d much rather focus on these other works for the time being.

To start off, I don’t think any of these are bad movies. In fact, I think they are all objectively better movies than Death Proof, which suffers from agonizing accuracy to its genre of inspiration. However, it is interesting to take a look at the Tarantino apocrypha (which should really include True Romance, though I think the film’s inclusion in XX is a legitimizing move). Particularly, it is interesting to see how Tarantino’s writing materializes under someone else’s control; and how we deals with it.

So, over the next few days you can look forward to:

From Dusk Till Dawn

And just for fun, check out Tarantino’s trailers from the Grindhouse double-feature with Robert Rodriguez. Growing up on crap movies, I could legitimately see those showing up on MST3k. Kudos to those guys for accuracy.