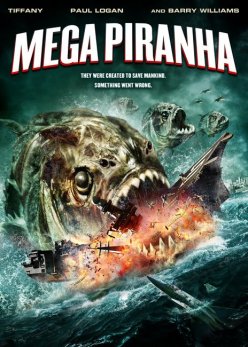 Next up in the “Water Foul” spotlight on the worst marine terrors in movie history is one of the lesser monster flicks produced by The Asylum: “Mega Piranha.”

The writer/director for “Mega Piranha” was Eric Forsberg, who has written such fantastic features as “Ghost Shark” and “Snakes On A Train.” He interestingly hasn’t done any directing work since “Mega Piranha,” which released in 2010.

The cinematographer for “Mega Piranha” was Bryan Olinger, who has worked on similarly low-budget flicks like “Area 407” and the “Sherlock Holmes” mockbuster, which is probably my favorite movie from The Asylum due to its ridiculous and bizarre plot, involving dinosaur hallucinations, an “Iron Man” suit, and complicated airships.

The editor on “Mega Piranha” was a guy named Bill Parker, who also cut The Asylum’s mockbuster sequel “Transmorphers: Fall of Man.”

The special effects on “Mega Piranha” were provided by Tom Devlin, who has also provided effects work for movies like “Daredevil,” “Sand Sharks,” “Club Dread,” and “Poultrygeist: Night of the Chicken Dead.”

The musical score for “Mega Piranha” was composed by Chris Ridenhour, one of the go-to composers for The Asylum. He has also provided the music for the films “Sharknado 2,” “Abraham Lincoln vs Zombies,” “Transmorphers,” “Mega Shark vs Giant Octopus,” and the upcoming “Sharknado 3.”

The cast of “Mega Piranha” is led by Paul Logan (“Days Of Our Lives”), 1980s teen pop star Tiffany, and Barry Williams (“The Brady Bunch”), along with an awful lot of people whom I doubt anyone would recognize.

The story of “Mega Piranha” is not all that much different from “Piranha:” genetically enhanced piranha escape from an experimental facility into a central water system, a begin terrorizing the locals. The biggest differences involve the setting (a politically charged Venezuela) and the size of the piranha, which increases exponentially by the day.

“Mega Piranha” was created as a ‘mockbuster’ of “Piranha 3D,” the second remake of the 1970s “Jaws” knockoff “Piranha.” That means that “Mega Piranha” is technically a knockoff of a reboot of a knockoff. In another odd twist, the release of “Piranha 3D” wound up being delayed, so “Mega Piranha” aired before the film made it to theaters. That’s actually a bad thing for a ‘mockbuster,’ because they parasitically depend on the hype and advertising campaigns of the larger film to build an audience.

“Mega Piranha” is one of many monster-themed, CGI-heavy movies created by The Asylum for the Syfy channel, the most famous of which are the “Sharknado” and “Mega Shark” franchises. Rival schlockmasters and fellow Syfy channel contributors New Horizons Pictures (“Sharktopus,” “Dinoshark,” “Carnosaur”) made their own take on a piranha flick in 2012 with the hybrid “Piranhaconda,” directed by Jim Wynorski (“Chopping Mall”) and produced by Roger Corman.

The reception to “Mega Piranha” was, predictably, not good. It currently holds an IMDb rating of 2.4, along with Rotten Tomatoes scores of 8% (critics) and 16% (audience). The movie initially aired on Syfy in April of 2010, to a recorded 2.2 million views.

The CGI in “Mega Piranha” looks awful, to the point that the fish puppets in “Piranha” look far better, and that was in the 1970s. The production couldn’t even convincingly sink a boat with practical effects, or portray a helicopter, or even replicate an alligator head (which you can literally buy in many gas stations). It is honestly pretty pathetic to watch.

Another aspect of “Mega Piranha” that I just didn’t understand was the amount of really extreme color tinting, that struck me as totally unnecessary. It felt like watching “CSI” with the color filter taken to the max, which is an effect that can pretty much only serve to make your movie look awful (assuming you aren’t David Fincher or the Coen brothers).

“Mega Piranha” also inexplicably labels all of the characters when they appear on screen, which would would feel weird in even the cheesiest of action movies. That is the sort of practice that belongs in outdated sitcom introductions, not a horror/monster movie.

One of the strangest part of “Jaws” occurs after the climactic death scene, when the shark dramatically (and confusingly) roars as it sinks to its demise in a cloud of blood. “Mega Piranha,” in perhaps a misguided homage, has it’s monster fish roar constantly throughout the film, to the point that the movie sounds like the masses of lions in “Roar.”

Not to nitpick, but one of the key plot points in “Mega Piranha” is that the fish are reproducing at a rapid rate (roughly every day), and growing exponentially with each generation. As far as I understand math, doesn’t that mean that the species would rapidly burn out? At a certain point, there wouldn’t be enough food to sustain the population in a given area, and the competition would rapidly whittle it down. The short life span, dramatically increasing size, and rapid breeding would just serve to accelerate the process of the species dying out. Sure, people are in danger and it would be best to eliminate them, but the terror would only last a week at most (they explicitly state they will be as big as whales within a few days). Bigger isn’t necessarily better from an evolutionary and biological standpoint, something the movie (and the scientist characters) totally seem to miss. There is a reason we don’t have bus-sized sharks anymore, after all. In fact, the biggest issue facing the characters and the world of the film is probably how the piranha would wreck the ecosystems of the areas they pass through over the course of that week, which is never actually discussed in the film. Piranha of that size and number could wind up killing massive populations of whales in that short period of time, and that would be a serious bummer.

I don’t have to tell you that the dialogue and acting is bad in “Mega Piranha.” We all know those things are bad. If you have seen one movie from “The Asylum,” you have basically seen them all: they all function as variation on a mediocre theme, being played over and over again and again until we tear out our ears or start singing along, or maybe both.

“Mega Piranha” is a sort of movie that I generally find hard to enjoy. Companies like The Asylum and Troma don’t set out to make quality products, and try to pass off their lack of passion and exceptional incompetence with a giggle and a wink. I try to avoid them as a general practice, as earnestly made b-movies and Hollywood flops are just typically more interesting. The Asylum in particular is also very insulated, and tends to use the same crews over and over again, which results in all of their movies looking and feeling very similar. Just take a look at all of the crew credits earlier in this review, and look at how many of those credits are other Asylum flicks. Something that made the 1960s and 1970s Roger Corman movies so interesting is that he brought in fresh, interesting people straight out of film school to make many of his pictures: this resulted in the discoveries of people like Francis Ford Coppola, Martin Scorcese, James Cameron, and countless others. The Asylum doesn’t seem to comprehend that there is value to variety and vision, and instead clusters together like an isolated cult running a sovereign nation of schlock. It isn’t a good look, and they aren’t winning over a lot of new people for it.

If you like awful CGI monsters and the usual products put out by The Asylum, feel free to whistle right along to the tune of “Mega Piranha.” Otherwise, I suggest digging up something else. Even some of the more popular Asylum flicks, like a “Mega Shark” or a “Sharknado,” would be more worth your time than this.