“Silencing the Gossip Queen” is the final episode in the original series of Bibleman, called “The Bibleman Show.” As with the previous episode, “Six Lies of the Fibbler,” Willie Aames is credited as writer, producer, and co-director, as well as filling in the lead role as Bibleman.

The villain of the episode is the eponymous Gossip Queen, who looks like a traditional witch, and also has force lightning powers like Emperor Palpatine.  She apparently just generally hates friendship and good things, which is the extent of the motivation that is provided. She has henchmen by the names of Loose lips and Blabbermouth, which I guess fits with the dastardly theme of gossip. Once again, the villain somehow knows Bibleman’s secret identity without any explanation, and attacks directly at him before trying to go after the children. Also of note is that the Gossip Queen gets a musical number, which is the first time the villain has gotten to perform in the show.

“An ounce of gossip is worth a pound of trouble”

The story of “Silencing the Gossip Queen” centers upon the same group of musical kids that appeared in the previous installments of “The Bibleman Show.” The time, a villain called The Gossip Queen conspires to break up their special friendship  through the use of planted rumors and hearsay. Once again, Bibleman has to help repair the damage and save the day from evil, but only after escaping his kidnapping by The Gossip Queen.

Once again, the villains die miserable, brutal deaths in “Silencing the Gossip Queen.” Bibleman evaporates both Loose Lips and Blabbermouth with deflected lightning blasts, and then melts the Gossip Queen with his laser sword, after which he looks directly into the camera and says:

Honestly, that part is pretty bad ass. However, there is something to be said for the fact that Bibleman seems to frequently leave his enemies as corpses. Most heroes that do that are well within the bounds of being anti-heroes, and the practice is pretty seriously frowned on as far as superhero decorum goes. I suppose you can chalk that up to his particularly brutal and conservative version of biblical morality. 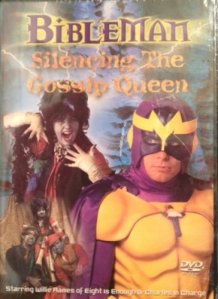 “Silencing the Gossip Queen” isn’t nearly as entertainingly awful as “Six Lives of the Fibbler,” but it is worlds better than the first two episodes in the series. Regardless, I’m thrilled to be done with “The Bibleman Show,” because I just can’t handle any more awful child-driven Christian musical numbers. I hadn’t seen any of these episodes previously, and now I think I know why they aren’t as popular as the later series, which strike me as being generally better polished in most regards. They are still awful, and I might eat my words on this, but they aren’t nearly as bad as “The Bibleman Show,” which is generally a dull, unfocused mess. As far as a recommendation goes, you could do worse than “Silencing the Gossip Queen,” but there are some more entertaining entries in the Bibleman franchise that are more worth your time.

One thought on “BibleMan: Silencing The Gossip Queen”