BibleMan: Lead Us Not Into Temptation 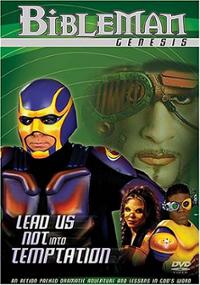 “Lead Us Not Into Temptation” was released in February of 2001, and is the seventh entry into “The Bibleman Adventure,” which is the second incarnation of the franchise.

Willie Aames once again plays the role of Bibleman in “Lead Us Not Into Temptation,” while also directing, producing, and co-writing the episode. His co-writer was Greg Perkins, who also collaborated with Aames on the screenplay for the earlier episode, “Conquering the Wrath of Rage.”

The villain in “Lead Us Not Into Temptation” is again Luxor Spawndroth, who previously appeared in “Breaking The Bonds of Disobedience,” in which he was notably exploded into many pieces. He is played by Brian Lemmons, who makes his seventh straight appearance as the villain in the show. However, the is the first time in that run that he has reprised the same role. The evil computer L.U.C.I. and his primary henchman Ludicrous also feature alongside him.

In “Lead Us Not Into Temptation,” Biblegirl makes her first appearance as an official member of the team after joining at the end of “Breaking the Bonds of Disobedience.” U.N.I.C.E., the supercomputer, and Cypher, Bibleman’s other sidekick, also appear, rounding out the bible team.

The plot starts off as BibleMan tries to save a young, newly-converted Christian child by helping her overcome the bullying she faces from her non-Christian friends. Because, in our Christian-dominated society, that is totally a thing that actually happens. In any case, she becomes tempted by the evil magic of computers and the internet via peer pressure. Satanic forces take over her mind via the internet (a website called “Hackemup.com”) and try to make her to leave her new religion and hang out with her non-Christian bullies. It is…amazing.

The amount of luddite, imaginary computer magic going on in this episode is hilarious, and the misunderstanding of how computers and the internet function is baffling. Go figure that the folks behind “BibleMan” wouldn’t totally grasp the latest technology, given their top-notch mastery of computer generated effects. There are a lot of computer-ish terms thrown around without context in this episode, like this line in reference to the demonic website / game / vaguely evil internet thing (HackEmUp.com):

“I went to the site. It was pretty cool. Well designed, lots of fail-safes and duplicate firewalls. Very high security for something like this…”

That sounds like they read the back of the box for Norton Antivirus, and figured that’s all they needed to know to write this episode about the evil internet. As you would expect with any BibleMan episode, the special effects are hilariously pathetic. None of the websites look like anything that is actually on the internet, and the sets are as colorfully cartoonish as ever. There are predictably a lot of lasers and vaguely technological effects going on, including a bizarre force-field effect used to indicate that someone’s mind is being controlled by satanic computer magic. 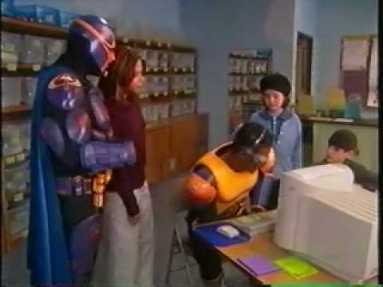 The offensive portrayals of non-Christians in this episode are really over the top: essentially, the lesson of the episode is to not associate with any non-Christians in any capacity, because they are corrupting influences. Also, apparently all non-Christians in Bibleman’s fantasy universe are massive dickheads, which is frankly the real reason someone wouldn’t want to associate with those people. The fact that this is a lesson taught to children who watch this show is just backwards and hazardous. Among other things, this lesson is designed to stunt children’s social growth, and deliberate encourages them to have a less diverse social network. The goal is to try to make children shut out any alternate viewpoints and perspectives about the world, which is just…bad. It is just plain bad.

This episode features one of my favorite scripture-related exchanges in the show that I have seen so far, which goes as follows:

Biblegirl: I’m worried about him (Cypher), and Riley

Biblegirl: What can we do?

Bibleman: Well, the Bible says that we shouldn’t worry about anything, but pray and ask God for anything you need.

Biblegirl: I know this one! Phillipians 4:6!

Bibleman: That’s right! Then, we need to find out who is really behind this website!

Just to recap that dialogue, BibleMan says to pray about the issue and do nothing else. Then, he says to specifically do something about it. Was that scripture even sort of necessary or relevant there? Even better, the very next scene is BibleGirl spying on Cypher and reporting his activities to BibleMan, after which they confront him. Is that not the opposite of what he (and the bible) said to do in that situation?

Unsurprisingly, “Lead Us Not Into Temptation” features another brutal death for Luxor Spawndroth, who is this time evaporated by a deflected laser blast. 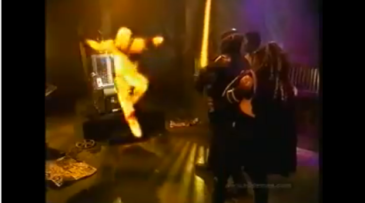 This is one of the few episodes that I had actually covered previously on the blog. I absolutely love this episode, and typically refer to it as “BibleMan vs. The Internet” due to the ridiculous plot. This is one of the first episodes of the show I ever saw, and it made a pretty significant impression on me, though not in the way that the creators intended. I definitely recommend giving it a watch if you can dig up a copy of it.

One thought on “BibleMan: Lead Us Not Into Temptation”