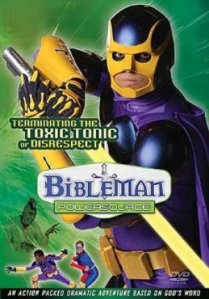 “Terminating the Toxic Tonic of Disrespect” marks the first episode of the third and final incarnation of the Bibleman franchise: “Bibleman: Powersource.” Robert Schlipp stars in his second episode as Bibleman, after taking over the role from Willie Aames.

“Terminating the Toxic Tonic of Disrespect” was produced and directed by Steve Gilreath, and written by Michael Nolan. As far as I can tell, there was very little carry-over from “The Bibleman Adventure” behind the scenes.

Bibleman is once again joined by his longtime ally, Cypher, who features much more prominently in the new, incredibly boring opening sequence. Biblegirl is absent from the episode (only temporarily), but a new character named Melody is introduced as the third member of the team.

The new villain of the episode is a neon mohawked creature named E. Meritus Snortinskoff, who is accompanied by a henchman named Stench. There is another villain introduced in a flashback: a Riddler-inspired man called “The Cheater,” who will pop up later in the series. These villains, in a bit of a separation, aren’t the offensive stereotypes I typically expect of the series. Instead, the antagonistic duo of Snortinskoff and Stench are just run-of-the-mill zany mad scientists. However, they also aren’t quite as memorable as The Wacky Protestor, which is hard to deny.

The story starts as the two sinister scientists are making a bunch of kids indignant and rebellious by selling them “M-Pow-R” energy drinks made from sugar, water, and, basically, “pure evil.” The Bible team realize what is happening after noticing a bunch of burgeoning teenagers acting shitty to authority figures. Because, you know, that never happens otherwise.

The Bible Team ultimately wind up getting a sample of the “M-Pow-R” energy drink, and discover its contents (selfishness, bad attitudes, and probably a lot of high fructose corn syrup I assume?). This leads to a rambling, scripture-laced train of thought that could rival the revelation scene from “Black Dynamite.” Somehow, through rambling about trees for a while, the team figures out where to find the evil scientists.

The acting is somehow dramatically worse than during the run of “The Bibleman Adventure,” which I think is primarily the fault of the new lead, Robert Schlipp (and what I assume is a lower budget). He is so astoundingly wooden that he makes Willie Aames look like a real leading man. Speaking of which, Cypher really should be Bibleman, which is something that I mentioned in my reviews of the past couple of episodes. Schlipp is just awful, and lacks any kind of charisma or screen presence, which Brady Williams actually does have to a degree. Clearly concessions had to be made to get Cypher to come back at all, like having him appear alongside Bibleman in the opening sequence.

The Bibleman lair is gone, which I suppose makes sense, given I assume that was underneath Miles Peterson’s house. Instead, the team is based out of what looks to be a trailer, or “Mobile Command.” They also have kind of creepy, military-ish jumpsuits when they are not in superhero garb, which makes them seem even more like a fanatical paramilitary group. The fact that the show continues on with the previously only vaguely referenced “Board of Directors” of “Central Command” just strikes me as all kinds of creepy, like there is a sinister, right-wing corporation funding fundamentalist vigilantes all across the world.

The introduction of Melody offers the only actual good lesson that I have seen in the entire series: BibleMan and Cypher at first assume that she is a delivery girl when she shows up at the base, and initially dismiss her as a moron despite her expertise with technology. Of course, in typical BibleMan form, they never acknowledge the obvious sexism of their assumptions, and only ultimately apologize for not respecting her as one in “God’s image.” So close, BibleMan. So close.

Something that I will be interested to see once I get to The Cheater’s episode is if the flashback sequence in this story is recycled footage from there, because it is pretty jarring and out of place where it is here, like it was included to fill out time.

Something that I noticed quickly about this episode (in comparison to previous ones) is that the cinematography is distractingly awful, to the point of being nauseating during certain sequences with the villains. The camera is rotated dramatically and constantly during Snortinskoff’s screen time, which is more than excessive. Dutch angles can certainly be effective to create tension and unease, but the way they are used here is beyond over the top: the characters almost look like they are on a boat in choppy water.

This is another episode of Bibleman that I have covered previously on the blog, and I still really like it. This episode might not make the best introduction to the franchise, but it has all of the necessary elements to make for an entertainingly awful episode. The villains are hammy, the plot is nonsense, the acting is wooden, and the special effects / stunt work is laughably terrible. “Toxic Tonic” definitely gets a strong recommendation from me.

One thought on “BibleMan: Terminating the Toxic Tonic of Disrespect”