The writer of The Killer Shrews was Jay Simms, who also wrote the low-budget b-movies The Giant Gila Monster, Panic In Year Zero!, and The Creation of the Humanoids. The director for The Killer Shrews was Ray Kellogg, who was also behind The Giant Gila Monster, and previously worked as a visual effects artist on movies like The Seven Year Itch and Gentlemen Prefer Blondes.

The cinematographer on the film was Wilfred M. Cline, who worked on such b-movies as The Giant Gila Monster, William Castle’s The Tingler, and Calamity Jane.

The editor for the movie was one Aaron Stell, who also cut highly acclaimed films like To Kill A Mockingbird and Touch of Evil, along with b-movies like The Giant Gila Monster, Silent Running, and Creature With The Atomic Brain.

The music composers for The Killer Shrews were Emil Cadkin and Harry Bluestone, a frequent composition duo. The latter of the two was a noted violinist who has had compositions featured in movies like Night of the Living Dead, Frida, and The Ladykillers.

The cast of The Killer Shrews included James Best (The Dukes of Hazzard), Ken Curtis (Gunsmoke), Baruch Lumet (The Pawnbroker), and the film’s producer, Gordon McLendon.

The plot of The Killer Shrews follows a group of people on a remote island, where a series of scientific experiments have created a species of giant, aggressive shrews with venomous bites. During a hurricane, the group of terrified people are put under siege by the shrews, and have to struggle to survive and find a way to escape with their lives.

The Killer Shrews wound up featured in a season 4 episode of the cult hit television show Mystery Science Theater 3000, which was dedicated to mocking many of the worst films in history.

Depending on the shot, the eponymous killer shrews that appear in the film are either portrayed by hand puppets or dogs in vaguely shrew-like costumes, which you can see in screenshots below. 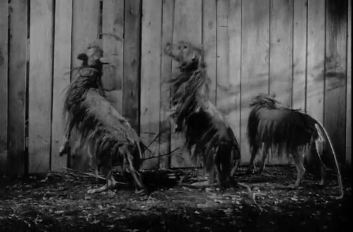 The Killer Shrews notably received a colorized home video release in 2007 along with its companion film, The Giant Gila Monster. Personally, I don’t think the colorization really adds anything to the movie, but it is available if that is the sort of thing you are interested in.

Astoundingly, a sequel to the movie was made in 2012,  over 50 years after the original’s release, called Return of The Killer Shrews. The follow up follows a documentary crew that stumbles across the island decades after the events of the first movie, where the shrews have developed significantly over the years.

The Killer Shrews is widely regarded as a terrible, yet classic, b-level monster movie. It currently holds a 3.7 rating on IMDb, along with Rotten Tomatoes scores of 50% (critics) and 25% (audience).

The Killer Shrews was made on an estimated budget of $123,000, and grossed roughly $1 million in its theatrical run on a double bill with The Giant Gila Monster. Both of the movies were made back to back outside of Dallas, TX, with much of the same crew involved. Both films are now regarded as b-movie classics for their respectively memorable monster effects.

Almost the entire plot of The Killer Shrews takes place over the course of a siege, with the characters barricaded into a compound and surrounded by the eponymous shrews. While there are plenty of good movies that use sieges effectively, it is really easy for movies with this device to become boring, because there is no natural motion or progression for the story in a physical sense. Movies like Assault on Precinct 13 use the small confines to create tension, and hone in on the psychological developments of the characters as the siege proceeds, and they are forced to bond and interact with each other. Unfortunately, The Killer Shrews doesn’t quite grasp how to do this, so most of the movie is just characters sitting around waiting for things to happen, and they never seem to really bond effectively.

The thing that really makes this movie memorable, however, are the effects. The shrews are some of the most silly movie monsters of all time, in both their puppet and dog forms. The hand puppets actually look kind of menacing, but they are still recognizably just hand puppets, and are about as intimidating as a herd of stuffed weasels. The dogs, on the other hand, just look adorable, and their outfits make them look all the more ridiculous. On screen, they look like they are just having a good time running around, but the actors have to try to make them seem terrifying with their reactions. 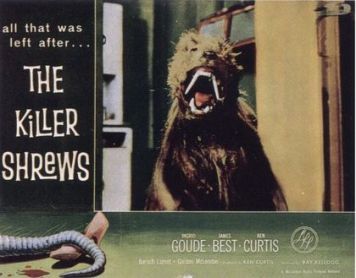 Overall, this is a fun little monster movie that has managed to last through the years. There is certainly nothing groundbreaking about it, but the effects are just silly and charming enough to make this worth sitting through. The ending, in which the survivors essentially use a phalanx formation to get past the shrews, is also pretty memorable in how ridiculous it is. If you like classic low-budget monster flicks, this one is worth checking out. It is far from the worst of the bunch out there, and I actually enjoy it more than most of its peers because of how earnest it seems to be from beginning to end. Fortunately it is in the public domain, so it isn’t a hard one to get a hold of.