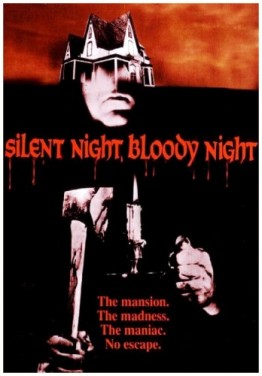 Silent Night, Bloody Night was directed and co-written by Theodore Gershuny, who wrote and directed a number of episodes of Tales From The Darkside, as well as the Troma distributed movie Sugar Cookies. His co-writers for the film were producer Jeffrey Konvitz and Ira Teller.

The cinematographer on Silent Night, Bloody Night was Adam Giffard, whose credits were primarily documentary features. The most notable of these was the groundbreaking 1970 Rolling Stones documentary Gimme Shelter, on which he was a camera operator along with George Lucas.

The editor for the film was Tom Kennedy, who worked on films like The Family Enforcer and Joe, and later directed 1982’s Time Walker.

The music for Silent Night, Bloody Night was composed by Gershon Kingsley, who was an early pioneer of electronic music and the use of synthesizers. His most recognizable and oft-covered tune is 1969’s “Popcorn.”

The plot of Silent Night, Bloody Night is summarized on IMDb as follows:

A man inherits a mansion, which once was a mental home. He visits the place and begins to investigate some crimes that happened in old times, scaring the people living in the region.

Silent Night, Bloody Night has had a number of alternate titles throughout its lifetime, including the original release title of Night of the Dark Full Moon, the production title of Zora, and the German release as Bloodnight: The House of Death.

The similar title often leads to Silent Night, Bloody Night getting confused with the later film Silent Night, Deadly Night, which is perhaps the best known holiday horror movie, due mostly to the public controversy that surrounded it. However, outside of a common use of wordplay, the films have no relation.

The creepy and distinctive house used as the centerpiece of the film is apparently still standing in the Oyster Bay area of Long Island.

The popularity of Silent Night, Bloody Night didn’t catch on until years after its release, when the show Elvira’s Movie Macabre featured it in the second episode of its first season, which introduced it to a brand new audience that missed it on its initial, limited drive-in release.

Silent Night, Bloody Night is currently in the public domain, which means it is readily available both on DVD and digitally at minimal (or no) cost.

Silent Night, Deadly Night was made on a shoestring production budget of less than $300,000, but it only received a limited theatrical release at a handful of drive-in features. However, it is now a cult classic of the genre, and is appreciated by horror fans as one of the earliest slasher movies. Currently, it holds an IMDb user rating of 5.3, along with a Rotten Tomatoes audience aggregate score of 30%.

Silent Night, Bloody Night was clearly ahead of its time as a slasher movie, predating movies like Halloween and Friday the 13th by the better part of a decade. It is hard to say whether it had any influence on the genre, given how obscure of a release it was until it was dug up again in the early 1980s. Regardless, it is a prescient feature in a number of ways, and is interesting to watch as a harbinger of what would become the dominant sub-genre of horror for many years.

As far as performances go, Mary Woronov is certainly a highlight of the movie, and is certainly deserving of her cult status as an actor. John Carradine is always interesting to see later in his career, though his role in the movie is certainly limited, as he plays a mute in the film. Otherwise, there aren’t any utterly terrible performances to be had here.

The biggest problem with Silent Night, Bloody Night is the pacing: this is a movie that really plods along, and takes its time to make any real progress. It doesn’t build tension nearly as well as it should either, though the score is pretty effective at helping accentuate the more tense moments. The idea behind this feature is ultimately way better than the execution, though there are certainly some entertaining points in it. To its credit, the plot is certainly interesting, but it takes a little too long to reach its boiling point.

Flicks like Silent Night, Deadly Night and the original Black Christmas might make for better holiday-themed horror watches, but this is pretty decent for a deeper cut to check out, particularly for cult movie and horror fans. Overall, I wouldn’t recommend this for a casual movie-goer, but die-hards might just enjoy themselves with it.