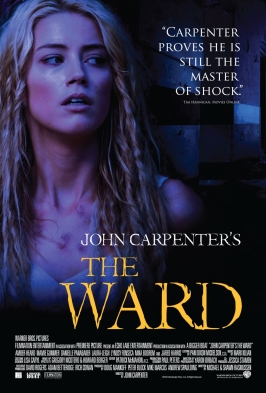 Today’s entry into “Worst of the Best” is John Carpenter’s 2010 effort, The Ward.

The Ward was written by the duo of Michael and Shawn Rasmussen, who also wrote the movies Long Distance, Dark Feed, and The Inhabitants.

The Ward is (to date) the final directorial effort of John Carpenter, who is highly regarded for both his horror and action movies, including Halloween, They Live, Escape From New York, Big Trouble In Little China, Assault on Precinct 13, The Fog, Starman, Christine, The Thing, and Vampires.

The cinematographer for the film was Yaron Orbach, who has worked extensively on Orange Is The New Black, as well as on movies like The Ten, Birds of America, The Open Road, and The Joneses.

The editor for The Ward was Patrick McMahon, who cut the 2008 remake of It’s Alive, Little Monsters, Strange Brew, P2, and A Nightmare On Elm Street, among others.

The musical score for The Ward was provided by Mark Kilian, who provided music for movies like Traitor, Rendition, Pitch Perfect, and the television series Castle. This is particularly notable because historically, John Carpenter has provided most of his film’s scores himself.

The makeup effects were provided by a team that included Howard Berger (976-EVIL, Intruder, The People Under The Stairs, Vampires), Greg Nicotero (The Black Cat, Dreams in the Witch House, From Dusk Till Dawn 2, From Dusk Till Dawn 3, Maniac Cop 3), Kerrin Jackson (Son of the Mask, Jonah Hex), and Kevin Wasner (Catwoman, Jennifer’s Body).

The plot of The Ward is summarized on IMDb as follows:

An institutionalized young woman becomes terrorized by a ghost. 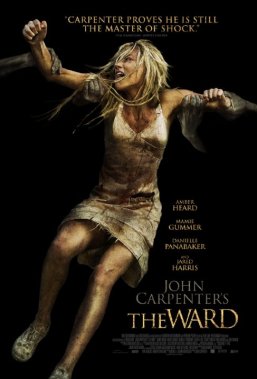 The Ward currently has an IMDb user rating of 5.6, along with Rotten Tomatoes scores of 33% from critics and 27% from audiences. Financially, it lost a significant amount of money: on an estimated budget of $10 million, is grossed barely over $1 million, almost entirely from international markets.

The Ward isn’t the worst movie I’ve ever seen. Really, it isn’t anywhere close to the worst. However, it represents a really disheartening fall from grace for both John Carpenter and the genre as a whole, because it is just so overwhelmingly mediocre and familiar. If there is anything that John Carpenter has never been in his career, it is familiar. Even his other arguable missteps, like Ghosts of Mars and Escape From L.A., still feel like John Carpenter at the end of the day. The Ward, however, seems like it could have been made by any half-assed horror director in Hollywood, and people just expected something better than that from Carpenter.

The most similar film in Carpenter’s filmography to The Ward is probably In The Mouth of Madness (though it is a stretch). Comparing the ways that the two movies (and the two versions of Carpenter) deal with a similar steady blurring of fiction and reality reveals a lot about why The Ward feels so tired and unremarkable. In The Mouth of Madness presented an eerie world from the start, where things feel off-kilter naturally, and the environment steadily declines until the conclusion of the second act, when sanity takes a nosedive. It is a profoundly surreal movie that utilizes fantastic effects work and visuals to create the atmosphere of a world descending into a Lovecraftian hell. The Ward, on the other hand, is never quite so dramatic. It is a slow story punctuated solely by jump-scares (a tired tactic), where the entire world seems to exist in a bland scale of sepia tones. The visuals are never particularly compelling, and the tension is mostly reliant upon musical cues. The world doesn’t feel as curious or strange on the whole, which ruins what could have been a really cool claustrophobic atmosphere. The whole direction of The Ward strikes me as passionless, like Carpenter went into autopilot and just wanted to color between the lines.

That said, there are some definite positives to The Ward. Specifically, I think that the performances are solid from top to bottom: Amber Heard deals with her leading responsibilities well, and Jared Harris absolutely kills it as the hospital’s primary doctor. The last act also sees the story and action start to kick into gear, and makes for a pretty compelling last 25 minutes or so.

Overall, The Ward isn’t bad so much as it is disappointing. I don’t think it is worse than the field at large, but Carpenter’s reputation looms over it, and might have put expectations on it that it couldn’t possibly have been lived up to. Regardless, it may very well stand as the final entry in Carpenter’s filmography, as much of a shame as that might be. However, for what it is worth, I though it was better than the flaming garbage pile that is Ghosts of Mars. Stay tuned for that one.