Hercules Against The Moon Men 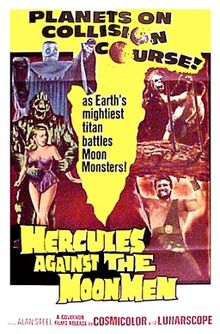 Today’s feature is the bafflingly-titled Hercules Against the Moon Men, from 1964.

Hercules Against The Moon Men was co-written and directed by Giacomo Gentilomo (Goliath and The Vampires, The Last of the Vikings), along with Arpad DeRiso (Hercules and The Black Pirates), Angelo Sangermano (There’s A Spy In My Bed), and Giovanni Scolaro (Dead Are Countless).

The cinematographer for the film was Oberdani Troiani, who also shot the movie The Giant of Metropolis, as well as the Orson Welles adaptation of Othello. 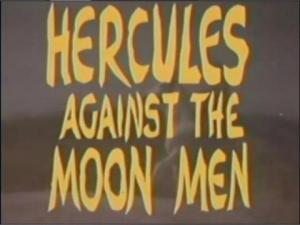 The effects work for Hercules Against The Moon Men was done by Ugo Amodoro (Atom Age Vampires) and Antonio Marini (The Fury of Hercules).

The plot of Hercules Against The Moon Men is summarized on IMDb as follows:

Hercules is summoned to oppose the evil Queen Samara, who has allied herself with aliens and is sacrificing her own people in a bid to awaken a moon goddess.

According to IMDb, Hercules Against the Moon Men was the fourth and final movie in a series of Italian-made “Hercules” (more on that in a bit) films that spanned from the late 1950s to the early 1960s, and included Hercules Unchained, Hercules and The Captive Women, and 1958’s Hercules.

Hercules Against The Moon Men was the featured movie on the tenth episode of the fourth season of cult favorite television show Mystery Science Theater 3000, which exposed the movie to a far wider audience than had previously seen it.

In the italian version, the hero of the story is not named Hercules, but Maciste, a popular Italian hero featured in many adventure films. The original title of the movie was even Maciste and The Queen Of Samar. It was the decision of the producers and the dubbers to change the name of the character (and, subsequently, the film), as Maciste is not widely known to western audiences.

The director of Hercules Against The Moon Men, Giacomo Gentilomo, retired from film making after completing the picture, and became a painter. 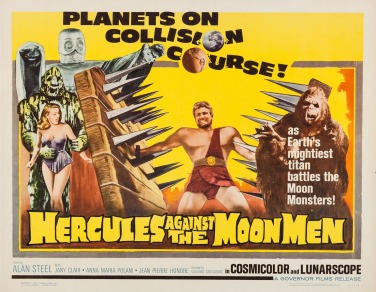 Hercules Against The Moon Men currently holds an IMDb user rating of 2.6, alongside a Rotten Tomatoes audience aggregate score of 17%.

One of the most infamous sequences in Hercules Against The Moon Men features a sandstorm on screen that obscures all of the action for multiple minutes. That is perfectly indicative of the kind of shoddy workmanship was put into this move from top to bottom. 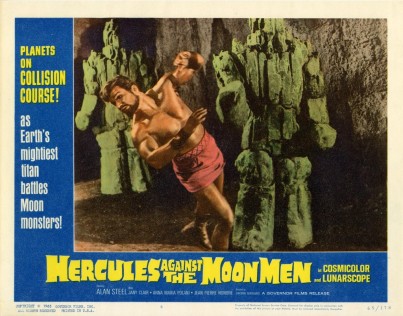 More so than most bad movies I have seen, Hercules Against The Moon Men feels like a completely passionless production, like no one behind or in front of the camera was present for any other reason than a paycheck. One of the things that makes many memorable bad movies unique is how much misplaced passion and dedication is put into them by genuinely inept creators, who simply take on tasks too big for their capacity.  When that element is missing, the finished product is almost always unwatchably dull, even if there are brief moments of entertainment. Outside of the goofy designs of the Moon Men and the inexplicably perpetually-oiled appearance of Hercules, there isn’t a whole lot to enjoy here.

That said, MST3k has a way of making the unbearable bearable, and their take on Hercules Against The Moon Men is a classic episode in the beloved series, and for good reason. If you are curious about this movie, I recommend watching it with the help of Joel and the bots.