The Exchange is yet another regional chain of buy/sell/trade media stores, with locations throughout Indiana, Ohio, Pennsylvania, and Illinois.

On my way back from B-fest in Chicago this past weekend, I made a quick stop in Indianapolis to check out a handful of used media shops around the city. My first stop was at the 82nd Street location of The Exchange. 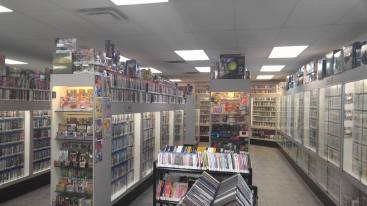 The store has a nice look to it, but struck me more as a games and nerd paraphernalia shop than a place to do much movie hunting. Neither the deals nor the selection were super impressive to me, though I wound up with a ton of movies from picking up two collections on clearance for a dollar each. Here is what I ultimately came away with:

To my immense displeasure, all of the horror movies in the store were held behind glass, which means I couldn’t do much reading into them until an attendant could open the case. I made a bit of a gamble on this one, crossing my fingers and hoping it was the Joe Don Baker movie from 1977. Unfortunately, this is not that movie. However, judging from its IMDb score, this 2010 french horror flick is still pretty terrible, and might be delightful serendipitous find.

This is a franchise that I really need to dig further into. As far as bad sequels go, The Howling has more than a handful of them out there.

Moon Of The Wolf

Monsters In The Woods

Werewolf In A Girls’ Dormitory

The President’s Plane Is Missing

C’mon, it was a dollar. I am allowed to watch good movies sometimes. Also, I’m interested to run it back to back to back with Battle Beyond The Stars and Seven Samurai, in chronological order.