The plot of Man-Thing is summarized on IMDb as follows:

Agents of an oil tycoon vanish while exploring a swamp marked for drilling. The local sheriff investigates and faces a Seminole legend come to life: Man-Thing, a shambling swamp-monster whose touch burns those who feel fear.

The eponymous character of Man-Thing is credited to Steve Gerber, a veteran comic book writer who might be best known for creating the somewhat infamous character of Howard The Duck. He wrote a lauded 39-issue series that brought Man-Thing to wider prominence and fleshed out the story, but he interestingly did not create the character. The first appearance of the swampy creature was in Savage Tales #1 in May of 1971, and was initially conceived of by four notable comics figures: Stan Lee, Gerry Conway, Roy Thomas, and Gray Morrow.

This film adaptation of Man-Thing was directed by Brett Leonard, who is best known for movies like The Lawnmower Man and Virtuosity. 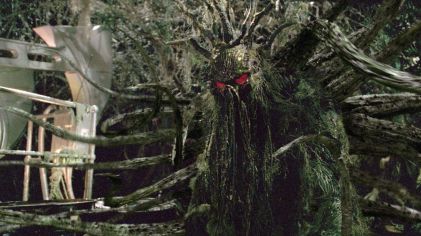 The cinematographer for Man-Thing was Steve Arnold, who also shot the films Feed, Highlander: The Source, and Last Cab To Darwin, along with a handful of shorts, documentaries, and television series.

Man-Thing was cut by editor Martin Connor, whose other credits include The Hard Word, The Railway Man, and Burning Man, along with a good number of Australian television series.

The production of Man-Thing had two lead designers: Tim Ferrier, who is best known for doing the design work for the cult favorite science-fiction television FarScape, and Peter Pound, a storyboard and concept artist who has worked on films like Ghost Rider, Mad Max: Fury Road, Dark City, and The Crow.

The initial plan was apparently to have Man-Thing film in New Orleans, essentially on-location for the Louisiana setting of the story. However, budget limitations led to a change of plans, and Australia ultimately served for the backdrop for the production.

While Man-Thing didn’t reach a very wide audience with its television debut and subsequent DVD release, those that did see it didn’t much care for what they saw. Currently, it holds an IMDb user rating of 4.1/10, alongside Rotten Tomatoes scores of 17% from critics and 12% from audiences.

The first thing that I noticed about Man-Thing is that the color grading is absolutely out of control. Most of the sequences are absolutely drowned in green tones, to the point that the whole movie looks like an overdone CSI episode. During the handful of daylight sequences, yellows take over with very much the same effect. However, no matter what, every sequence is unreasonably over-saturated with one color or another, which makes the movie look and feel cheaper than it needs to.

Man-Thing features a handful of unique scene transitions in the form of rapid montages of gore, pollution, and swamp imagery juxtaposed together. While I thought this was pretty interesting the first time it happened, it gets far too overused over the course of the film, to the point that it loses its potency. The same could be said for the whole movie, to be honest: there is a lot of rapid cutting whenever the action picks up, which gets really tiring after a while. When the same gimmick happens over and over again, it becomes predictable and uniform, as opposed to novel.

One of the most common complaints that I have read about Man-Thing is that it is not loyal to the source material of the comics, wherein Man-Thing is more of a heroic avenger than a murderous terror. While I am sure this was frustrating for die-hard fans, I can totally understand why the production went in the direction of a horror movie: honestly, it just makes more sense for the setting and concept, particularly for a one-off story. If this were going to be a television pilot or a franchise-builder, having Man-Thing as a protagonist would have made sense. However, I think that is a lot to ask for in a single movie. Unlike Swamp Thing, Man-Thing is not very humanoid in design, and it would be really hard to get an audience to back him.

One of the most impressive aspects of Man-Thing is surprisingly its use of gore, which I really didn’t expect. A number of key scenes in the movie take place either during autopsies or at crime scenes, where the bodies play an important role in building up the anticipation and fear of the monster’s full reveal. The fact that these corpses are done well adds a lot of power to the movie if you ask me. Honestly, most of the effects look good, which is more than a little unusual for a modern b-movie. This was likely due to the dark lighting concealing CGI issues, but if it works, it works. The portrayal of Man Thing himself is also notably cool and intimidating, and gives a distinct sense of size that does a lot for making the character imposing when fully realized on screen.

As far as the performances go, I think that all of the players are perfectly serviceable for a b-movie, particularly considering that almost the entire cast was filled in regionally on location. Even the comic relief characters, which can easily wreck the tone of a horror movie when done poorly, work like a charm.

As with seemingly every b-movie of the past 30-odd years, there is a sequence in Man-Thing with completely unnecessary nudity and sexual content that adds nothing to the story or characters. However, unlike most b-movies, it only happens once, and stands in sharp contrast with the rest of the film. While I haven’t read anything to attest to this, I have a suspicion that this brief sequence towards the beginning of the film may have been added in at some point, probably to help in selling the film to a distributor. I do know that the movie struggled for distribution before SyFy took it on, and this seems like just the sort of move that would be made to try and lure a sleazy distributor off of the fence.

It is worth noting that I have watched a ton of SyFy originals and straight-to-DVD features over the years, and typically, they are the absolute bottom of the barrel in quality. Man-Thing, when you stack it up against these cohorts, stands out from the bunch. Compare this film to any given Lake Placid sequel, or any of the litany of Mega Shark or Sharknado features, and you would come out with a much greater appreciation for it than if you compared it to Marvel Studios outings. I think that people often see this film, and compare it unfairly to movies far outside of its league.

Overall, I think that Man-Thing is a half-decent b-level flick, though definitely flawed. It clearly turned off fans due to the significant deviations taken from the source material, but as someone who isn’t familiar with the comics: this is totally ok. In a lot of ways, it feels like a modernized swamp monster movie, more so than most of the remakes and homages I’ve seen over the years.

As far as a recommendation goes, I would say to give it a shot. There are way worse entries in the early days of Marvel movies, and if you can handle any SyFy Original, you can certainly deal with the negative aspects of Man-Thing. If you go in with no expectations, and leave any prior comic book knowledge of the character at the door, you might just have a half-decent time with this flick.