Today, I’m going to take a look at the 1982 cult classic, The Beastmaster.

The plot of Beastmaster is summarized on IMDb as follows:

A sword-and-sorcery fantasy about a young man’s search for revenge. Armed with supernatural powers, the handsome hero and his animal allies wage war against marauding forces.

Beastmaster was both directed and co-written by Don Coscarelli, who is known for other cult favorites like Phantasm, John Dies At The End, and Bubba Ho-Tep.

The cast of the movie is made up primarily by John Amos (Coming to America, Die Hard 2, Lock Up), Rip Torn (Men In Black, Dodgeball, RoboCop 3, The Man Who Fell To Earth, Trial and Error), Tanya Roberts (Sheena, A View To A Kill), and Marc Singer (Arrow, Beastmaster 2, Beastmaster III).

The cinematographer for Beastmaster was John Alcott, who was a frequent collaborator of Stanley Kubrick, shooting The Shining, Barry Lyndon, and A Clockwork Orange under him.

Beastmaster‘s editor was Roy Watts, who also cut movies like Kes, Sinbad and The Eye of the Tiger, The Golden Voyage of Sinbad, Vice Squad, and 1999’s Beowulf.

The musical score for Beastmaster was composed by Lee Holdridge, whose other credits include The Pack, Mr. Mom, Splash, and Born In East L.A., among others.

The veteran special effects team for the film was made up of Frank DeMarco (Battle Beyond The Stars, The Terminator), Roger George (The Howling, Chopping Mall, Ghoulies, Night of the Creeps, Night of the Demons, Blacula, Humanoids From The Deep, Bloody Birthday), and Mark Sparks (Gremlins 2, Jingle All The Way, Friday the 13th: A New Beginning).

Once it hit television, Beastmaster became such a staple of cable channels that comedian Dennis Miller joked that HBO stood for “Hey, Beastmaster’s On”, and TBS was sometimes jokingly referred to as “The Beastmaster Station.” Its frequent television airings wound up building the film a dedicated cult following, which paved the way for its sequels in spite of mediocre initial box office returns.

Speaking of which, Beastmaster ultimately spawned 2 formal sequels: Beastmaster 2: Through the Portal of Time in 1992, and Beastmaster III: The Eye of Braxus in 1996, followed by a television series adaptation from 1999-2002 called BeastMaster.

Demi Moore apparently auditioned more than once for the role that went to Tanya Roberts, and was reportedly Don Cosciarelli’s first choice for the role. Likewise, Cosciarelli desperately wanted famed actor Klaus Kinski for Rip Torn’s role, but an agreement couldn’t be reached.

The story of Beastmaster is based somewhat loosely on the 1959 book The Beast Master, by Andre Norton, though it isn’t considered an official adaptation of the work. That book spawned four subsequent books, which spanned all the way to 2006.

Director Don Coscarelli sold off his rights for the story and characters of Beastmaster after this first movie in the franchise, so he had no involvement with the sequels or the TV-series.

Beastmaster ultimately took in $14 million in its lifetime theatrical run, on an initial production budget of $8 million. For years, critics and audiences have been divided on the feature: currently it holds a 6.2/10 IMDb user rating, alongside Rotten Tomatoes scores of 42% from critics and 54% from audiences.

The first and most obvious issue that I have with Beastmaster are the dyed tigers, which appear throughout the movie. First off, they look absolutely ridiculous, and I can’t believe they were given the go-ahead. Secondly, why didn’t they just use them as tigers? Apparently, the dyeing was done because the director specifically wanted panthers, but the trainers informed him that they weren’t easy to work with, and that tigers were much better for what they needed. At that point, Coscarelli should have just used the tigers as is, but someone had the bright idea of dyeing as a “compromise.” The result is one of the cheesiest and cheapest aspects of the movie, and it undercuts every sequence that the cats appear in.

The eponymous Beastmaster, Dar, is kind of a creep, which I have a big problem with. In an early scene, he deliberately puts a woman in danger, and afraid for her life, in order to rescue her and force a kiss. The sequence is ultimately not only played for laughs, but she becomes the love interest for the rest of the film, because his antics were just so charming. Our hero, everyone! My big issue with this whole thing is how it impacts the target audience for the movie, which I assume was primarily adolescent boys. Instilling the idea that forcing romance through violence is a-ok, and even laudable, is absolutely ridiculous, and places some harmful values into the back of the minds of kiddos. A movie is totally fine to be stupid fun, but contributing to real social ills is a pound and a half of bullshit.

Personally, my favorite sequence in the film is probably when Rip Torn is shown hoisting a small child over his head, and then throws it into a pit of fire. That is the kind of ballsy action you just don’t get on screen nowadays. While it is true that the child is ultimately saved, we still get a nice shot of him being thrown, and falling into the pit. That, in my mind, is at least worth partial points. In general, Rip Torn is a highlight of the film, and relishes in his mustache-twirling shenanigans. It is a shame that he isn’t in more of the movie, because he lights it up every time he is shown. 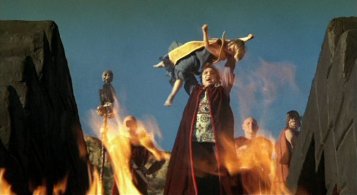 The animal footage scattered throughout Beastmaster is a unique mixture of impressive and horrifying. At times, particularly with the ludicrously-dyed tigers, I was reminded of watching Roar, a disastrous movie where most of the cast and crew received serious injuries from the big cats used in the production.

Interestingly, there is a major inspiration for Beastmaster that I haven’t seen mentioned all that much: Shakespeare. There is a fair amount of story elements from Macbeth here: the movie opens with three witches over a cauldron, who then make a fatal prediction to an ambitious man. Then, that man becomes a tyrannical, usurping leader, who is undone in accordance with the witch’s prophecy by a man not born of a woman. Beastmaster is kind of like the story of Macbeth, if it were told from Macduff’s point of view, and Macduff could mind control tigers, and with all of that bothersome inner turmoil and ethical drama drained out.

Overall, Beastmaster is some excellent cheesy fun, but it is definitely a movie for another age. I suspect that there were some serious issues behind the scenes with having so many animals on set, which I shudder to think of. Likewise, Dar’s early romantic antics are, to be generous, antiquated, and to be truthful, assault. As far as a recommendation goes, I can advocate for it as a nostalgic endeavor only, and with knowledge of its faults.