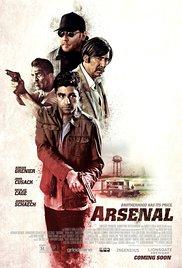 Today, I am going to be kicking off an entire month dedicated to the worst films of 2017. First up is the mostly overlooked Arsenal, featuring Nicolas Cage and John Cusack.

The plot of Arsenal is succinctly summarized on IMDb as follows:

A Southern mobster attempts to rescue his kidnapped brother.

The sole credited screenplay writer for Arsenal was Jason Mosberg, who currently has no other listed credits on IMDb. 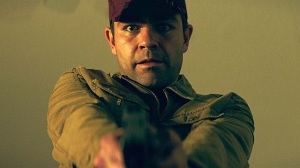 The cinematographer for the film was Brandon Cox, who additionally shot the films Heist, The Collector, Extraction, and Marauders.

The editor for Arsenal was Vincent Tabaillon, who has cut such films as Taken 2, Now You See Me, The Incredible Hulk, Clash of the Titans, The Legend of Hercules, and Transporter 2.

Arsenal was released in January 2017 by Lionsgate Premiere, a division of the larger Lionsgate production company which specializes in direct-to-streaming and on-demand releases.

The movie is interestingly a quasi-sequel to Deadfall, a mostly-forgotten 1993 crime film that also features Nicolas Cage as the character of mobster Eddie King. However, it is not clear if this was actually intended by the screenwriter, or something that Cage decided to do on his own, and was permitted by the production.

Arsenal was filmed on location in the gulf coast city of Biloxi, MS, and features a baseball game of the local minor league team, the Biloxi Shuckers. Biloxi is known primarily for its handful of casinos and resorts, as well as being the base of operations for the notorious Dixie Mafia.

Arsenal was released under a couple of alternate titles in international markets. The first is more than a little sensible, given the movie’s Mississippi setting: Southern Fury. The other title, however, really boggles the mind: Philly Fury. I’d love to know who thought that this alternate title was even remotely accurate, or why they thought it would have appealed to international viewers. 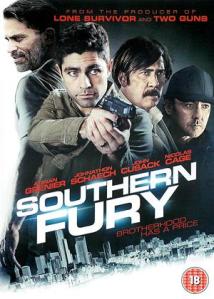 The reception to Arsenal was overwhelmingly negative: it currently holds an IMDb user rating of 4.0/10, along with Rotten Tomatoes scores of 4% critics and 20% from audiences.

Arsenal, unfortunately, is one of those dreadful films that suffers from not having quite enough Nic Cage to be fun, but also having too much of him to be taken seriously.  Part of the problem is that Cage isn’t given the room to be truly crazy: he doesn’t have much screen-time, and his few sequences are far too brief for him to get cooking. In his one-star review for RogerEbert.com, Simon Abrams writes the following:

it’s hard to say what kind of performance Cage is trying to deliver since director Steven C. Miller frequently cuts Cage off before he can get going. Cage…is a scene-stealer even when he’s over-acting, like a car wreck that keeps finding ways to explode…But because he’s never allowed to cut loose, “Arsenal” never comes to life.

When Cage is given sufficient time on screen and enough slack in his chains, he tends to do something memorable (for better or worse). Arsenal is a movie that desperately needed some element to stand out and inject energy into the story, which is exactly what Cage excels at. However, it seems that Miller just couldn’t figure out how to use him and his strange, dark powers to elevate the movie. 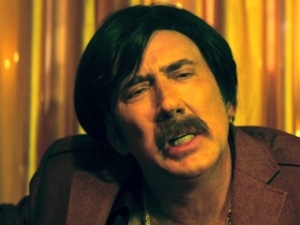 That said, Nicolas Cage is by no means the problem with Arsenal. His performance is weird and unintelligible, to be sure, but he is hardly a fatal element here. The biggest issue, in my eyes, is the screenplay, provided by first-time scribe Jason Mosberg. As you might expect from a rookie screenwriter, Arsenal lacks a lot of the finer touches: elements like the rhythm and pacing just feel off, for instance. The dialogue isn’t terrible, though it is doesn’t really ring as organic either: it mostly just serves the purpose of moving the story along, rather than rounding out characters. The result of all of this is that the story moves its way along slowly, and it is notably difficult to identify with and invest in the cast of characters along the trek.

Beyond Nicolas Cage, the rest of the cast isn’t much to write home about either. John Cusack, for the few minutes that he shows up, sleepwalks through his role, and even looks like he is actively trying not to be recognized (always in a pair of sunglasses and a hat). Adrien Grenier, who is perplexingly the lead of the movie, just doesn’t work as an engine for a film. He is a guy who can typically slot in well in a supporting role, ideally with some kind of comedic material. Part of why he worked well in Entourage is because, somewhat ironically, he was always in a supporting role to the people around him, and didn’t have to bolster the weight of the story himself.

One of my personal pet peeves with b-movies is the uninspired and excessive use of slow motion sequences. The big A-list films tend to make decent use of slow-motion: think of Dredd or 300, where the effect is used to either cleverly imitate the effect of a drug, or enhance a memorable image that would otherwise have been lost in the action. Likewise, the more recent X-Men films have managed to use slow-mo to showcase the perspective of a speedster. These are all interesting ways to use slow-mo that fit an artistic or story-related purpose. In Arsenal, and many movies like it, slow motion sequences are included for seemingly no reason: whenever something sudden or violent happens, the action is just slowed down. The resulting images may be spattered with gore, but they are far from iconic or artistically composed. I suppose the effect is supposed to give the events more weight or gravity, but the result is usually that the movie just slows down, which doesn’t do the poorly-paced screenplay any favors.

Overall, I don’t think that Arsenal is necessarily any more or less than your typical straight to video feature. Honestly, I think the biggest reason that it attracted the critical flak that it did came from the top-heavy cast. However, it is hard not to feel that some real potential was wasted here. I still think that both Cusack and Cage have gas left in the tank, and could make for an interesting on-screen combo again. However, they really need to be in more capable hands (of both a screenwriter and director). Ultimately, the point of Arsenal was clearly to put recognizable faces on a cheap and utilitarian product, and in that regard it succeeded. The fact that anyone watched the movie or is talking about it is proof of the production’s (relative) success.

All of that said, there is absolutely no way that I could recommend this movie. It may be “successful” in purely financial terms, but it is still roughly as boring as watching paint dry. The pain of seeing Cusack and Cage so under-utilized just makes it all the worse, and more than justifies its reputation as one of the worst films of 2017.