A good portion of my readers are probably unaware of what I do outside of obsess about “bad” and “failed” movies. Currently, I’m hard at work on a MEd in Higher Education Administration at Vanderbilt University. If you don’t know what exactly that means, you certainly aren’t alone. I suppose you could say that my degree is training me to be something like this: 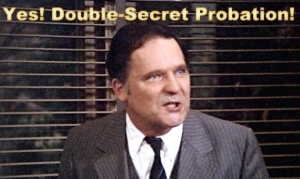 Well, not really, but this brings up something important. Through studying higher education, I have quickly learned that the general public has no idea how it really works on the inside – we all have a dramatically distorted image of the institution in our heads. The strange reputation of higher education, its personnel, and its culture has been built through decades of popular culture and film, which have pulled content from bizarre inaccuracies, half-truths, and tall tales stretched to their limits. These cultural portrayals of higher education ultimately inform politics and education policy, so their underlying influences are important to discuss. Given I am both a bad movie blogger and an aspiring academic in the field of higher education, I’m going to do the obvious: dive into movies about higher education, and discuss their issues and inaccuracies.

So, in the near future, I’ll be talking about some films that involve higher education institutions. Expect to see me examine the proliferation of degree mills by way of Accepted, dissect the history of collegiate secret societies with The Skulls, dig into modern greek culture with the Van Wilder franchise, cover the unfortunate racist legacy of the Ivy League with Soul Man, and much, much more. I might even do an interview or two with higher education practitioners and researchers: we’ll see where the winds take me. Think of this new segment as something akin to History Buffs or Bad Astronomy. Keep your eyes peeled for the first installment soon!

One thought on “Ivy on Celluloid”