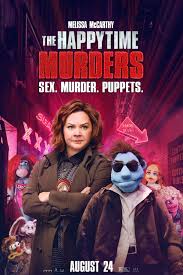 Today, I am continuing my Worst of 2018 coverage with the oddball puppet movie, The Happytime Murders.

The plot of The Happytime Murders is summarized on IMDb as follows:

When the puppet cast of a ’90s children’s TV show begin to get murdered one by one, a disgraced LAPD detective-turned-private eye puppet takes on the case.

The Happytime Murders was co-written by Todd Berger, who is perhaps best known for his bizarre dark comedy, It’s A Disaster.

The director for The Happytime Murders was Brian Henson, who previously directed Muppet Treasure Island and The Muppet Christmas Carol. Notably, he is the son of Jim Henson, beloved creator of The Muppets. 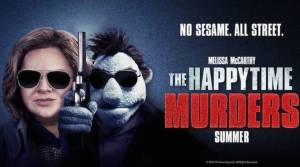 The cinematographer for the film was Mitchell Amundsen, who also shot CHIPS, A Bad Moms Christmas, Odd Thomas, Jonah Hex, Now You See Me, Transformers, and Wanted.

The score for The Happytime Murders was composed by Christopher Lennertz, who also provided music for films like Pitch Perfect 3, Sausage Party, Uncle Drew, Baywatch, and Horrible Bosses.

Sesame Workshop filed a lawsuit against the production over the tag line “No Sesame. All Street.” claiming that it tarnished their reputation. The production company behind Happytime, STX, claimed that the advertising was clearly distinct from Sesame Street, and the suit was eventually thrown out. Afterwards, some TV spots for the film started with “From the studio that was sued by Sesame Street…”

When this film was announced, many noted the stylistic similarities to notable previous films, such as Peter Jackson’s vulgar puppet movie Meet the Feebles and the hit crossover animation / live action film noir, Who Framed Roger Rabbit?.

The Happytime Murders was a financial flop, bringing in only $20.7 million on a $40 million budget. Critically, it didn’t fare any better, as it currently holds a 5.3/10 IMDb user rating, along with Rotten Tomatoes scores of 23% from critics and 41% from audiences. Peter Travers of Rolling Stone went so far as to say that the film might be the worst of the decade, and numerous critics listed it among their worst films of 2018. 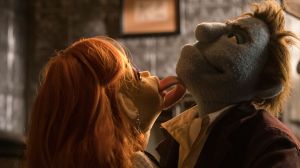 The biggest problem with Happytime, without any doubt, is that it is just not funny. The film tries to lean on the raw absurdity of featuring puppets in a lude plot, but there isn’t much mileage to get out of that. The film is almost entirely gross-out humor, with little in the way of thought or care put into the writing. The result is a shallow, uncompelling story laced with what might pass for humor at 2am to a thoroughly inebriated person with a deeply-buried puppet fetish.

What is odd about all of this is that Happytime boasts a really good cast of comedic performers. This is basically raw proof that performers, regardless of talent, can’t save underlying bad writing.

When it comes down to it, this film just shouldn’t have gotten the green light to start with. The very foundation of the premise was begging for failure. What I don’t understand is why anyone thought this would work, to the tune of $40 million. As a niche project by Adult Swim, I could maybe see something like this if the budget could be kept to a minimum. However, I just can’t imagine this even breaking even with the money put into it, and I don’t know why anyone thought it would. The best I can figure is that this was someone’s passion project (Henson?), who was well-connected and wealthy enough to make it happen regardless of criticisms. Regardless, it should go without saying that this film is an atrocious bore, and I can’t even lightly recommend it to the depraved – they almost certainly have better things to do than this.