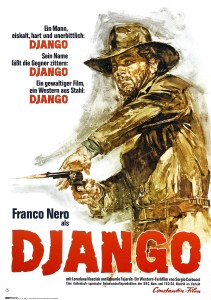 I’ve never been much of a spaghetti western fan, but I’ve had some friends swear by Django long before Tarantino’s recent homage. To put it accurately, the 1966 cult classic has always had my curiosity. After seeing Django: Unchained, it had my attention.

The first thing that caught my attention as I started Django was the title song. From the first pluck, there’s a twang of pure badassery. Is there any better way to start a western than with a catchy guitar riff? The shots that accompany it are equally awesome, revealing the mysterious title character through a blur, shuffling away from the camera with his iconic coffin in tow. Just give it a watch, it is a particularly impressive way to start a movie:

Of course, the next thing one notices after the opening is the dubbing. I grew up on Toho movies, so I’m typically immune to shoddy dubbing. However, the dubbing on the version I watched seems particularly bad. Could they have twisted the dubbers’ arms to at least try acting? It gets distracting at times, but I suppose it is plenty forgivable.

The first action scene brings up my biggest problem with the movie: outside of the lead, the characters just aren’t memorable or interesting. There’s Mexican leader bad guy, KKK leader bad guy, the bartender…they feel pretty cookie cutter to me. Then again, it is a spaghetti western. My hopes may have been a bit high. The only character apart from Django who can intrigue an audience is Maria, but her motivations barely make sense. As bold as she is at times, she does inexplicably fall for Django for unexplained and unexplored reasons. Apart from the fact that he saved her in the first scene, there’s just nothing there. By that logic of attraction, they might as well have had a romance between Django and General Hugo for as many times as he lent him a hand. Speaking of hands and Hugo, violent punishments are pretty much all his character had to define him. Not the makings of a strong character. Then again, that’s leagues better than the KKK guy. His defining characteristics are wearing a red scarf and disliking Mexicans.

Franco Nero pretty much distinguishes this movie from the spaghetti western pack with his performance alone. He has a gaze that stands out whenever his eyes are on screen, and makes the whole film revolve around him. He’s at once an intimidating figure that eats up the screen, but also portrays the deep pain that really defines the Django character. There is actually an interesting comparison to be drawn between Django and Django Unchained here that is pretty fundamental to how Tarantino’s diverges from the source in style. 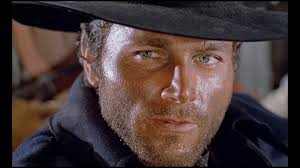 As mentioned, Nero’s Django is the absolute dominating force in Django throughout the film (apart from the ear/hand scenes and a few good Maria moments where she surprised me). In Unchained, Foxx’s Django is surrounded by an outstanding ensemble, and for a good portion of the film plays second fiddle to Waltz’s King. Honestly, I think having a stronger cast top to bottom makes a stronger movie than one that is purely driven by the lead. That may seem fairly intuitive to anyone with a brain stem, but the box office begs to differ. In any case, it makes the two films very different in their executions. 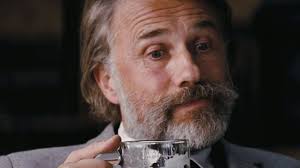 Focusing back on the original, I liked the plot much better than I thought I would. There’s quite a lot going on given the two “bad” factions that Django interacts with, and the weapons technology angle is really interesting to throw into the mix. Django’s minigun really is a game-changer, and is what initially makes his character important in the grand scheme of the story. Of course, he is certainly an impressive gunslinger as well, but his shooting skills aren’t what primarily brings attention to him. Django also proves to be rather cunning yet misguidedly greedy, which is quite the fault when it all comes down to it. Having a fallible, vulnerable, and not-so-straight-laced protagonist who doesn’t always come out on top gives Django an interesting edge. It makes the audience wonder on a number of occasions whether Django is someone you should be pulling for, while simultaneously making the audience feel genuine concern for his well-being. There aren’t a whole lot of characters like that out there.

The finale is outstanding in terms of shootouts. The suspense of the scene as it leads up to the conclusion is not what you generally anticipate from a concluding gun-battle, but it has a great charm to it. The scene is imitated in contemporary movies every now and then (Shoot-em Up comes to mind) In terms of trope-ness, everything sets up for an expected ending for Django. But as the kick-ass title song timely reminds us, “Django, you must face another day.”

There’s something about his ultimate survival that makes Django’s story deeply sadder. Throughout the movie, he is expecting (maybe even desires) to die; and it seems like the only thing he isn’t very good at is living. The way he brokenly stumbles away from the camera without even the solace of his companion coffin makes for a heart-wrenching closing shot.

Overall, I was impressed with Django; primarily in how much it exceeded my expectations. That said, I think this is a movie whose appeal is pretty limited to film buffs and western fans. Most of the glee I got out of the movie was in recognizing its influence on later works. To the average viewer, this is probably just a run-of-the-mill western. Judging from the ratings of the film online, this seems to hold true. On imdb, it hold a modest 7.3; whereas Rotten Tomatoes shows a disparate between critics : audience of 91 : 79.

Still, I’m confident in recommending it to anyone who at least enjoyed Django: Unchained. It is pretty cool to see scenes that are nodded to by Tarantino in Unchained. That said, the two movies are not exactly comparable. The original has only two advantages over Tarantino’s in my opinion: the ending is far better, and Nero’s Django is a better character than Foxx’s (Foxx’s Django is good, but he just isn’t as impressive or deep on the screen). Apart from those two aspects, Tarantino made a much better film in every imaginable aspect. The dialogue, ensemble, cinematography, plot, characters…just everything. And in Tarantino’s defense, his ending felt to be more of a nod to blaxploitation westerns than an attempt to make a compelling and deep conclusion. He could have made one if he wanted to (and I’m curious if there isn’t an alternate ending awaiting us in the future on the DVD release), but he elected to go a different route with it. I might not like the chosen path as much, but I think most audiences would prefer to not be left with a broken Jamie Foxx limping into the distance after seeing his wife killed. Bit of a downer.

The only other thing Django: Unchained was sadly missing was a recreation of this scene:

Taking out the KKK with a minigun? Delicious.

This was a movie filled with interesting and risky choices. The setting, the dialogue, the casting, the style: it all panned out superbly. The chemistry between both Foxx/Waltz and Jackson/Dicaprio was unexpectedly astounding, and the choices in ghastly imagery were more than mere exploitation.

There were no gasps in my theater during the more grisly scenes, just a powerful silence. I’ve seen plenty of Tarantino violence, but it has never been so powerfully sickening. In my opinion, it was deservedly and rightfully so. The setting shouldn’t be treated any differently. What Spike Lee describes as a ‘Holocaust’ should be depicted as such, with no blows held back in regards to stark and grim reality of the time. For a movie based on and expected to be mostly mindless action, much of the violence was more affecting and deep than I had expected. He went places in depicting the “Peculiar Institution” in film that has rarely (if ever) been dared. The fact he was able to get laughs out of his dialogue despite the tone and style of the movie says quite a bit for Quentin’s penmanship. It is also worth noting that the dialogue flow and form didn’t stick out with the setting, despite it being well out of Tarantino’s comfort zone of the contemporaneous.

I originally posted this over at Rotten Tomatoes.

After so many years of mumbling them to myself and anyone in the immediate vicinity, I finally have the motivation to actually write down my film and television reviews. So this is where they are going to go.