BibleMan: A Fight For Faith 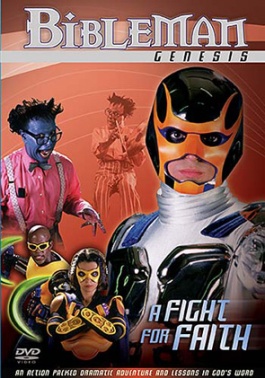 “A Fight for Faith” was co-written by Brady Williams and Jef Scott, the actors who portray Cypher and Wacky Protester, respectively. The director for the episode, a role that had long been handled by the now-absent Willie Aames, is Jim Standridge, who had been a cinematographer on the show dating back to “Breaking the Bonds of Disobedience.”

The villain of “A Fight For Faith” is played by Jef Scott, who appears yet again under the moniker of “The Wacky Protestor,” a character who was notably killed at the end of “Divided We Fall.” Apparently, death once again holds no meaning in the Bibleman universe, as he returns apparently unharmed. The evil computer, L.U.C.I., also makes an appearance as his quasi-henchman once again.

Bibleman is surrounded by his same typical group of allies: Cypher, Biblegirl, and U.N.I.C.E., though Bibleman himself is a new character: Josh Carpenter, who replaces Miles Peterson as the crusading hero.

The story of “A Fight for Faith” centers around a plan by Wacky Protester to literally convert the whole world to atheism through the help of a virtual reality video game that he calls “ART.” The new Bibleman, Josh Carpenter, has to work with the rest of the bible team to save the day.

L.U.C.I.: So, you want to convert the kiddies to atheism?

Protester: Yes! Yes! That’s correct! The belief that there is no god, no faith, no hope, or no future.

“A Fight for Faith” starts with a cold open, where Cypher is attempting to stop a band of bible thieves. Literally, this gang is hauling around giant crates labeled “BIBLES.” Now, if there is anything I know about bibles, it is that they are numerous in quantity and can easily be acquired for free, thanks to the Gideons. So, what exactly is the point in stealing crates filled with bibles? I just don’t get it: they aren’t worth anything, people can access them anywhere, so what exactly is the purpose of the act outside of empty symbolism (which is also irrelevant, because they are doing this in secret). Apparently, their ultimate plan is to burn them. However, I don’t understand why they didn’t just collect the countless free bibles floating around out there to do that? The cost/benefit of going through the trouble and hazard of stealing them from a warehouse  just doesn’t make sense to me, particularly for the purpose of what I assume is a political display.

Part of the plot that I didn’t cover in my summary is that the Wacky Protester at one point manages to sneak into a church, unquestioned, and essentially hypnotizes and kidnaps a number of kids from their vacation bible school. And it isn’t like he is sneaky or subtle: he wears the worst possible disguise, acts blatantly suspicious, and is hauling around a mysterious device that literally has “I ❤ Evil” painted on it. I’d be hesitant to trust any institution to keep children that fails to catch that in a security net. 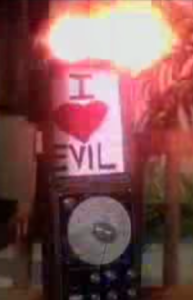 Speaking of which, the evil, atheist video game that Protester uses to trap children in is definitely one of the weirdest things to ever show up in the show. It isn’t a virtual reality game as much as it is a portal to an alternate dimension that is filled with bright colors, cartoons, 2-D images, and nightmares:

The final showdown of the episode features, among other things, a sing/dance-off between Wacky Protester and Cypher, who are notably also the two co-writers of the episode. Apparently, they were just dying to do a duet, so they wrote one for themselves. The episode concludes with Protester getting trapped in his trippy video game dimension, which I suppose spares him the almost guaranteed brutal death that he was going to face at the hands of Bibleman and company. 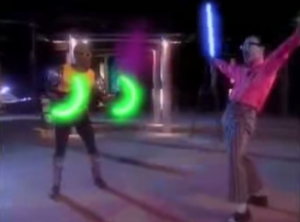 “A Fight For Faith” may be the most popular episode in the entire franchise, as it is the only one to inspire both a live stage adaptation and a video game. It might just be that the episode title was catchy, but this is definitely the one Bibleman story I have run into the most often, in one incarnation or another.

Something that I can’t help but wonder is how burned Brady Williams, the actor who plays Cypher, was about not getting to become Bibleman after Willie Aames left the show. It seemed like he was being groomed for it, and his presence with the program dated back a long way. However, I suppose it was decided that the conservative, evangelical consumer base wasn’t ready for a black Bibleman. After all, this was only 2005!

I don’t think I have to go into too much detail as to how this episode is offensive and generally shitty to secular people. I mean, the entire premise of the story is that not believing in god is bad and wrong, and that there is literally nothing imaginably worse than a world populated and run by nonbelievers. The entire notion of a moral code beyond the bible is an entirely alien concept from the point of view of the show’s creators. The goal here is clearly to stigmatize anyone who doesn’t believe in god, and to convey that message directly to an audience of young children. In a series packed with lazy stereotypes and bad advice, this is the most brazenly offensive of the bunch in my opinion.

Of course, all of that also means that this episode is, unintentionally, an absolute laugh riot. The lack of understanding and comprehension of technology, atheism, science, and generally everything in this episode is exponentially more over-the-top than anything that has been in the show up to this point. It is enough for me to wonder if Willie Aames was actually a moderating creative force for the program.  In any case, this episode makes for a strong recommendation from me: there is plenty of nonsense to enjoy here.