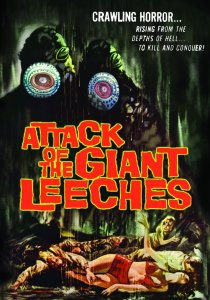 Today’s feature is another Roger Corman produced classic: Attack of the Giant Leeches, from 1959.

Attack of the Giant Leeches was written by Leo Gordon, a prolific actor who also penned the b-movies The Wasp Woman and The Terror. The film was directed by a man named Bernard Kowalski, who was also behind the memorable b-movie Night of the Blood Beast. However, he primarily worked in television, directing episodes of such programs as Rawhide, Baretta, Perry Mason, Columbo, and Knight Rider. The cinematographer for the movie was John Nickolaus, Jr., who likewise worked on television shows like The Waltons, The Outer Limits, and Rawhide, as well as Roger Corman’s The Terror.

Attack of the Giant Leeches was of course produced by the legendary Roger Corman, along with his brother Gene Corman, who co-produced a number of films with him during this era.

The plot of Attack of the Giant Leeches takes place in the Florida Everglades, where a pair of leeches have been mutated and been given extreme intelligence by some sort of wayward atomic rays. They begin kidnapping locals in order to feed off of their blood, which leads an investigation into the mysterious disappearances by local authorities, who have no idea as to what bizarre creatures are living in the swamp. 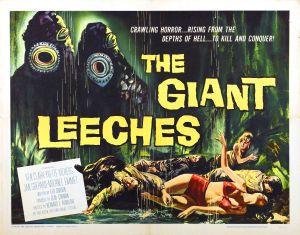 Attack of the Giant Leeches received a remake in 2008, which was far from well received. Outside of some minor acknowledgments, no one from the original production had any involvement in the modern remake/adaptation.

Attack of the Giant Leeches wound up featured in the sixth episode of the fourth season of Mystery Science Theater 3000, a cult classic television show dedicated to mocking bad movies.

While Attack of the Giant Leeches is one of the most memorable Corman-produced monster flicks, it wasn’t particularly well received: It currently has a 3.4 rating on IMDb, along with Rotten Tomatoes scores of 18% from audiences and 70% from critics. 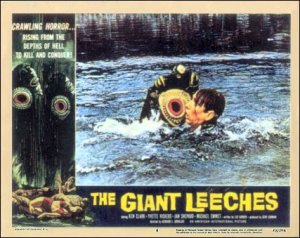 The eponymous giant leeches in the movie are obviously just guys in loosely decorated suits, but I actually thought that these worked better than a lot of similar b-movie monsters. Something about the mouths on leeches and other similar parasites are just naturally unnerving and creepy. However, the creatures in this movie are clearly more complicated than just being giant leeches: the suckers all over their bodies make them look more squid-like, whereas leeches only really have a sucker on the mouth. Also, there is a certainly practical infeasibility to the concept of a giant leech: they are supposed to be small in order to function as a parasite on proportionally much larger organisms. It doesn’t make sense for the same reason a giant mosquito doesn’t make sense: what exactly are they going to feed on to provide them the amount of blood they need to survive?

Something that I particularly noticed about Attack of the Giant Leeches is that the runtime is really short, barely clocking in at over an hour. However, somehow it still feels like the story is dragging its heels throughout most of the movie.  This is at least partially due to how long it takes for the characters to figure out that the Giant Leeches exist, but even after two point-of-view characters are captured, events just take place slowly. The movie overall doesn’t have much of a crescendo structure, which makes it pretty hard to get invested in the story, and the stakes never seem to really raise. Even worse, the ending is massive anticlimax, with the leeches being destroyed by an off-screen explosion, and their bodies subsequently floating up to the surface. Basically, the villains of the picture were defeated via dynamite fishing.

This movie is really, really boring, even if you watch it with the commentary from Mystery Science Theater 3000. Fortunately the run time is short, but I would advise to just skip this one in general. The leech-octopus suits are the only things that really stand out, and they aren’t quite interesting enough to justify watching the whole movie. Primarily this movie suffers from bad writing, because there just isn’t any kind of pace or structure built into the story, and the ending is just a total letdown. I was hoping for this to be another Attack of The Crab Monsters, but it certainly wasn’t. Unless you are interested in having all of the joy in your body slowly drained away, avoid The Giant Leeches.