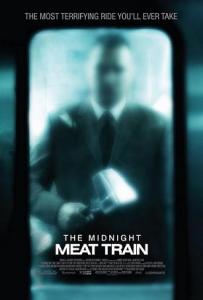 “The Midnight Meat Train,” which was written and produced by Clive Barker of the “Hellraiser” series, went through a brutal post-production and release process: between mandated cuts from the MPAA, budget limitations, and a major executive transition at Lion’s Gate (the departure of Peter Block), the movie hit significant delays, and only would up releasing in 100-odd theaters. Barker has described the experience of distributing the movie as “a journey into the real underbelly of Los Angeles.”

I first came across “The Midnight Meat Train” after it released On Demand through FEARnet (R.I.P.), and was of course hooked by the title. However, this is a film that goes far beyond just a catchy title: there is, perhaps surprisingly, a whole lot to like about this film.

“The Midnight Meat Train” was directed by Ryuhel Kitamura, a Japanese director who created “Godzilla: Final Wars” and the recent live-action adaptation of “Lupin III.” Kitamura was brought on after Patrick Tatopoulos, a creature creator and special effects guru who worked on “Underworld,” “I, Robot,” and “Trick ‘r Treat,” backed out of the production before filming began.

Kitamura described his vision for “The Midnight Meat Train” as being “the 80s way”: putting an emphasis on practical gore effects and tension, citing influences such as “The Hitcher,” “Hellraiser,” and “Friday the 13th.” In the commentary track on the film’s DVD, Kitamura specifically complains about the lazy and ineffective use of CGI gore in more recent horror movies, lamenting the days when practical effects were the only option. However, there is at least one distracting instance of CGI gore in “Midnight Meat Train,” which seems to be somewhat hypocritical.

The cinematographer on “Midnight Meat Train,” Jonathan Sela, has recently received acclaim for his work on the cult action movie “John Wick.” His previous credits include “Max Payne,” “A Good Day to Die Hard.” and the remake of “The Omen”: none of which have quite the same flair or punch of “Midnight Meat Train” or “John Wick.”

The cast features most prominently character actor Vinnie Jones (“Snatch,” “Lock, Stock, and Two Smoking Barrels,” “X-Men United”) towards the beginning of his down-slide, and Academy Award nominee Bradley Cooper just as his stock was growing (he was coming off of the antagonist role in “Wedding Crashers”). Cooper’s character is not unlike Jake Gyllenhaal’s in “Nightcrawler”: he is a scummy photographer who observes the dark side of the city, without ever positively interacting with it. Unlike Gyllenhaal’s character, though, Cooper’s has a slowly growing conscience that inflates over the course of the story. It makes the character a little more likable as he starts to make more moral choices as the movie goes on.

Vinnie Jones plays a stoic subway murderer and butcher named Mahogany, whose purpose and motivations are kept veiled throughout the film. This sort of “heavy” role is what has essentially made Vinnie Jones’s career, going all the way back to his Guy Ritchie crime movies. His dialogue is minimal, apparently based on input from the actor himself. It is hard to argue that the muteness doesn’t make his character more menacing. 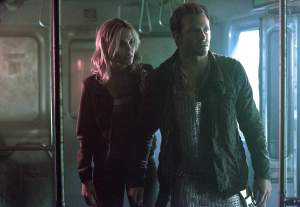 Clive Barker wrote the short story source material of “The Midnight Meat Train” based on an experience he had after first moving to New York City, in which he got lost while riding on a subway. The film manages to use the subway setting astoundingly to create tension and fear: everything from the screeching electrical sounds, to the sporadically flashing fluorescent lights, to the claustrophobic car space helps build the atmosphere for the film. 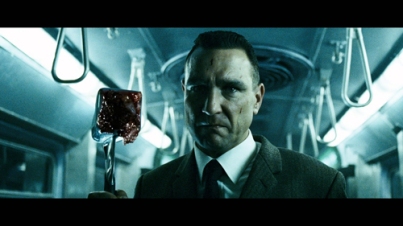 Another one of my favorite aspects of “The Midnight Meat Train” is one that I think has gone particularly under-appreciated: the score. Music is absolutely crucial for building atmosphere effectively in horror movies, and the work done on “The Midnight Meat Train” is absolutely knocked out of the park. Robb Williamson and Johannes Kobilke deserve a lot of credit for this score. Here is one of my favorite tracks, “Leon Jumps on A Train”:

It is worth noting that the production design on “The Midnight Meat Train” is really fantastic, particularly given the budget restraints eventually leveled on the film. The set at the end of the film, which appears to be a cavern, is actually ingeniously made out of paper to keep costs down. Also of note, I personally think that Mahogany’s chrome hammer and meat hook are just damn slick, as is his simplistic, professional costuming. Everything down to his haircut is made to look rigid, pristine, and cold. You can just imagine how chilling that chrome hammer has to feel. 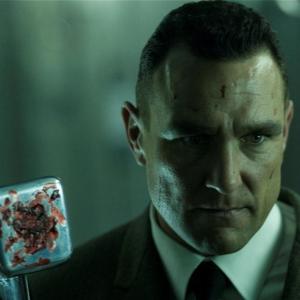 Something else I appreciate about “The Midnight Meat Train” is that the audience gets to see the reactions of the locals to the series of murders. You see security tighten up on the subway as the film goes on, and there is even a great sequence where a vigilante Guardian Angel takes on Mahogany on the subway, and just about defeats him. You don’t usually get that kind of public anxiety coming through in horror movies, at least not done well. I was reminded a little bit of “Maniac Cop,” which also manages to pull off this public anxiety effect really well. It makes sense, though: a lot of people are afraid of using subways, which is something brought up in the film. Nothing makes a horror movie like laying the plot on top of a setting that is already terrifying to many people.

The film’s story offers a handful of pretty good twists that I don’t particularly want to spoil here. I will say that there is a sudden and unexpected turn that reminded me a lot of the cult classic “CHUD.” As strange as it is, the turn turn is pulled off pretty well through the use of creative editing, though there was also a financial motivation for not revealing the monsters too much. I actually think, much like with “Jaws,” that keeping the creatures scarce maintains their mysteriousness, and doesn’t ultimately hurt the movie. The writers and director still managed to come up with an impressive ending without their inclusion, which is worth checking out. 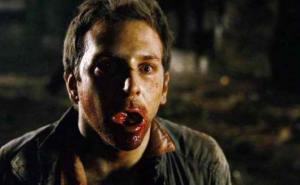 As far as weaknesses go, the plot of “The Midnight Meat Train” goes in circles a little bit, and is definitely a slow burn as far as pacing goes. That doesn’t work for a lot of people, but overall I think that this is a really surprisingly good horror flick, and one that puts most recent entries into the genre to shame. I do wish that the handful of CGI gore sequences were replaced with practical effects, but there are also moments where the CG is pulled off excellently: notably, all of the external sequences of the subway cars in motion.

The critical reception for “The Midnight Meat Train” was pretty good for a horror movie, racking up  a 71% critic score on Rotten Tomatoes. The audience reception wasn’t quite as favorable: it currently has a 50% audience score on Rotten Tomatoes and a 6.3 rating on IMDb. That doesn’t particularly surprise me, though: I feel like this movie is pretty well catered to horror die hards, and doesn’t have much in the way of mass appeal. That isn’t necessarily a bad thing, though.

Overall, this is an outstanding horror movie with only a handful of minor issues. The CG blood is disappointing and the pacing can be off-putting for some, but the atmosphere, style, score, and acting are all so fantastic that I think they make up for it. Even the story is far better than you would expect for a movie like this, even given how incredibly strange it is towards the end. 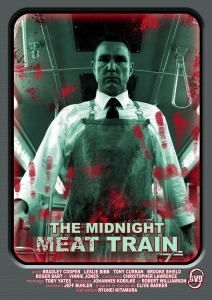 My recommendation, for horror fans particularly, is to seek this one out. “Midnight Meat Train” got a raw deal on release, which meant most people didn’t get an opportunity to see it. The film relies on its cult status, word of mouth, and the secondary market for building a fan base, and it is totally worth the pick up in my opinion. It isn’t a fun movie though, and probably isn’t great for a group watch (as the title might lead you to believe). It isn’t a good-bad movie, but rather it is just a good horror movie. You should absolutely  just know what you are getting into with this one ahead of time: if you do, I’m confident that most will enjoy it.