Continuing my perusal through the works of Nicolas Cage, today I am getting into gear with 2011’s Drive Angry.

The plot of Drive Angry is summarized on IMDb as follows:

A vengeful father escapes from hell and chases after the men who killed his daughter and kidnapped his granddaughter.

Drive Angry was directed, edited, and co-written by Patrick Lussier. As an editor, his credits include a number of later Wes Craven movies: notably Vampire In Brooklyn, Music of the Heart, Scream, Scream 2, Scream 3, Red Eye, and New Nightmare. As a screenwriter and director, he has done Dracula 2000, Dracula II: Ascension, Dracula III: Legacy, Terminator: Genisys (screenplay), and the remake of My Bloody Valentine (director). His co-writer for Drive Angry, Todd Farmer, previously contributed to the screenplays for Jason X and My Bloody Valentine, and also appeared in the film as Frank. 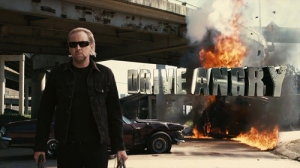 The cinematographer for Drive Angry was Brian Pearson, whose other shooting credits include Into The Storm, American Mary, Final Destination 5, Larry Cohen’s Masters of Horror entry Pick Me Up, and The Karate Dog.

The musical score for the film was composed by Michael Wandmacher, who also composed music for Underworld: Blood Wars, Piranha 3D, Punisher: War Zone, From Justin To Kelly, and the acclaimed video game Bloodborne.

The character of The Accountant, who is played by William Fichtner, is shown with a type of Greek coin called an obol. While obols were an ancient form of currency, they are famously remembered for their use in funerals: according to myth, they were placed in a deceased person’s mouth or eyes, so that they could pay for passage over the river Styx and into the afterlife. The Accountant is essentially a gatekeeper for the barrier between the world of the living and the world of the dead, so the presence of the obol is a nod to a relevant ancient custom.

Originally, Drive Angry was written and envisioned for an older actor, ideally someone who was in their 70’s. However, when Nicolas Cage approached the producers to express interest, they decided to go with him in the lead.

The advertising campaign for Drive Angry heavily emphasized that it was filmed in 3D, in an attempt to capitalize on a gimmick which was rapidly coming back into fashion. Apparently, the plan to film in 3D was a major reason why Nicolas Cage was interested in being involved in the first place.

Drive Angry was made on a production budget of $50 million, on which it took in a lifetime box office gross of roughly $28.9 million, making it a significant financial flop. Critically, it didn’t fare any better. It currently holds an IMDb user rating of 5.4/10, alongside Rotten Tomatoes scores of 46% from critics and 37% from audiences.

The first thing that absolutely must be mentioned about Drive Angry is that William Fichtner’s character of The Accountant is absolutely fantastic. He clearly had an absolute blast playing the character, and adds an immensely entertaining layer to the movie. Likewise, the villain, played by Billy Burke, is quite a bit of fun, and hams up his preacher character plenty. For that matter, the entire cast is loaded with entertaining character actors from top to bottom: I’m always kind of a sucker for David Morse and Tom Atkins, and having them pop up added a lot of entertaining color to film, regardless of how small their parts were.

In regards to the cast, however, Drive Angry has an unexpected weakness: Nicolas Cage.  For a man who has made a career out of screaming, manic performances, Cage could have been a little more crazy for a movie called Drive Angry. For whatever reason, he doesn’t really own the material, and plays his character as subdued and brooding rather than enraged. He is still serviceable enough, but he certainly doesn’t elevate the movie, which is a huge waste of both his, and the material’s, potentials.

As far as other weaknesses of the film go, at least in my opinion, the 3D work definitely wasn’t worth it. I assume that the budget had to be inflated to accommodate the costs of the technology, and the movie would have probably been more aesthetically pleasing and less of a financial loss without it. It is probably a product of the era, but the 3D sequences just don’t look very good today: they are a little too flat-looking by current standards, thanks to the rapid advancements of technology over the years. Not only are the 3D-emphasized sequences dated, but they are even more jarring given how many practical effects are used alongside them.

Speaking of which, the practical stuff, such as the aftermath gore effects and most of the car stunts, look great. If they weren’t marred by so much bad CGI mixed in, this would be a pretty cool effects movie. As it is, though, the effects style is really inconsistent, and leaves a lot to be desired.

Part of why these drawbacks are so frustrating is because there really is a good idea here: the plot and characters are generally fun, and they capture the spirit of an old-school grindhouse picture. However, the bad effects moments are a huge downer, and undercut all of the good elements here, to the point that it is a hard movie to recommend, despite how much it gets right.

For fans of the old grindhouse b-movie style, I think you’ll wind up in the same boat as me with Drive Angry: at times, you’ll be ecstatic with the positives, and at other times, you’ll be groaning and shaking your head at the negatives. I personally think that the peaks are worth the valleys in this case, but just barely. For casual movie watchers, I think it really comes down to how much you can tolerate bad CGI. If you are accustomed to modern disaster movies and Transformers sequels, this will come as a breath of fresh air, and you’ll be able to appreciate the positives of the film more. For effects sticklers, the negatives might be overwhelmingly distracting.