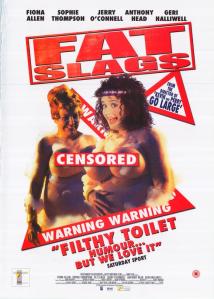 I don’t think I’ve hated a movie with this kind of a fiery passion since “Pledge This”. Really.

“Fat Slags” is apparently a film based on a vile, vulgar, and popular (?) British comic. I had never heard of it before, but apparently it does have a following, because the fan base evidently didn’t like this movie very much. I can’t speak for the source material, but this movie is primarily fart jokes, fat “jokes”, sight gags, and sexual “humour”. It is astoundingly lazy and low-brow, yet manages to be regionally esoteric as well. There are constant references to British pop culture that international audiences just could not care less about, which is a bad idea when you are writing a script with the intention to make money.

I admittedly didn’t do much research on this movie before doing my video reaction to it (above), and I’ve been a little surprised by what I’ve found now that I have. I assumed that I watched an unrated DVD cut that came after a PG-13 theatrical release, which is not an uncommon tactic these days for sexual / gross out movies. It is nearly impossible to distribute or make money on an R or NC17 comedy in theaters, because it cuts off too much of the potential audience. So, to sell DVDs, the filmmakers / producers add in jarring and unnecessary nudity to the movie after the theatrical release and advertise it as “uncut” or “unrated”. Given how unprompted, unexpected, and jarring all of the nudity was in this, I assumed that was the case here. In fact, this film never made it to the US in any form. The MPAA never had the displeasure of sitting through this. If you have a Region 1 copy of this movie, it is a bootleg. This movie was so destroyed by critics upon release in the UK, it never managed to cross the English Channel, let alone the Atlantic. Thank goodness.

This movie, above everything else, is lazy. Everything about it reeks of minimal effort: the acting, the sound editing (goofy cartoon noises abound), the shots, and most importantly: the writing. The writing goes for every low-hanging fruit it can get its hands on. It makes “Car 54, Where Are You?” look like a George Barnard Shaw work by comparison. The plot tried to be satirical towards celebrity media and fashion at times, but it lacks any kind of subtlety or consistency. You can’t criticize fashion for being shitty to overweight people and then spend the rest of your movie laughing at fat people breaking scales and farting. You just can’t do that.

Perhaps worst of all, Dolph “The Punisher” “Ivan Drago” “Professional Badass” Lundgren debases himself by making a cameo in this movie. Here is the whole scene. Let me know how much you laugh. Also, please note all of the sound editing.

I absolutely hated this movie. The writing was not unlike the Paris Hilton movies I’ve seen for this challenge in regards to crassness, but it managed to be cluelessly esoteric for anyone not from the British isles at the same time. Also, “Pledge This” at least had a handful of “WTF” moments that oddly amused me. No such luck here. It was incredibly offensive for a multitude of reasons, and borderline infantile it its failed attempts at humor. Despite ok production values outside of the cartoonish sound editing, the general tone-deafness of this idiotic display merits it a spot in the IMDb Bottom 100. Worst of all, it nearly ruined Dolph Lundgren for me. Fuck you, “Fat Slags”. Maybe if I can find a copy of “I Come In Peace”, Lundgren can be fully redeemed in my eyes.

The biggest takeaway from this movie is that you have to put in some damn effort and use common sense sometimes to make a successful film. You will be happy to know that this movie killed writer William Osborne’s career, and director Ed Bye has been relegated to television work. Also, Dolph Lundgren has an amazing quote about his involvement in this film:

“How did I get involved in Fat Slags (2004)? That’s a good question…I’d ask that agent of mine, but he’s sunk in the Thames River.”

Ah, justice. You know what? I would watch a revenge movie where Dolph picks off everyone involved in the making of this wretched film. Sign me up.