The Spirit was directed and written by Frank Miller, who is primarily known for his comic book work on characters like Daredevil and Batman. His work in the movies, while less notable, is not insignificant: he penned the screenplays for RoboCop 2 and RoboCop 3, and co-directed both Sin City movies.

The source material for the film was a comic strip of the same name that was developed by Will Eisner, and ran primarily during the 1940s and 1950s.

The cinematographer for the film was Bill Pope, whose other credits include Spider-Man 3, Army of Darkness, Darkman, The Matrix, Scott Pilgrim vs. The World, The World’s End, and Spider-Man 2, as well as the television series Cosmos: A Spacetime Odyssey.

The musical score for The Spirit was provided by David Newman, who has also provided music for films like Serenity, Ice Age, Death To Smoochy, Galaxy Quest, The Phantom, The Mighty Ducks, Heathers, and Critters, among many others.

The Spirit was made on a production budget of $60 million, on which it grossed just over $39 million over its theatrical lifetime, making it a significant loss. Critically, it didn’t fare any better: it currently holds a 4.8/10 IMDb user score, along with abysmal Rotten Tomatoes ratings of 14% from critics and 25% from audiences.

One of the biggest issues with the movie is its wildly uneven tone. For the life of me, I can’t understand why there was so much slapstick written into the screenplay. The style of the movie is stylized to look deadpan and dark, which is appropriate for dark and gritty stories. However, there’s constantly shitty humor being thrown around in the dialogue, which causes a huge disconnect with all of the messaging around it. A movie that looks like this should just never include the line “toilets are always funny.” 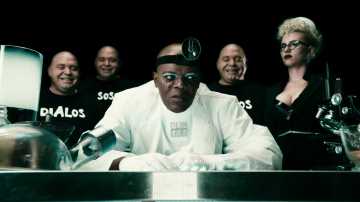 In another time, a movie with kind of odd sense of humor might have worked out. However, for contemporary audiences, I think it was just a bit too cartoon-y and out of touch. This wasn’t helped the sub-par comedic writing: maybe if the dialogue had actually been clever or funny, the movie would have resonated better with people, not unlike many of the Marvel movies have done. However, having Samuel L. Jackson parade around in racially and politically insensitive costumes isn’t exactly funny as much as it is uncomfortably weird and tone-deaf.

That being said, one of the few bearable things about The Spirit is the dastardly duo of Samuel L. Jackson and Scarlett Johansson, who are the only performers that seem to have a pulse in the movie. They are also the only ones who seem capable of delivering Miller’s god-awful dialogue, which seems to trip up everyone else. I do think that Dan Lauria was good casting for his small role, but he doesn’t have a whole lot to do in the movie apart from grumble.

When it comes down to it, The Spirit is an exercise in style over substance on every level. Miller clearly has an eye for individual images that work well in storyboarding and inside of comic frames, but the translation doesn’t always work on screen. The sort of comic stylizing used in the film can certainly work to solid effect, like in Sin City, but there is a delicate balance necessary for it to look just right. The Spirit just doesn’t find it, and I think that is specifically because Miller didn’t have a co-director to lean on, and offer a more cinematic eye to his work.

Overall, The Spirit is a painfully boring movie, despite having a pretty impressive design and look to it. Everything beneath that surface level, however, is at best sub-par. Re-watching the movie was even worse than I had remembered it: sequences drag on for far too long, and there are way too many tone-killing silly quips peppered in. On top of that, the stakes seem completely nonexistent: there’s never any believable challenge for the hero, as the villains are always too busy playing dress up to pose a real threat. I’d like to say that this is worth watching for some sort of unintentional entertainment value, but even Samuel L. Jackson at his peak hammy-ness isn’t enough to make this movie worth sitting through.