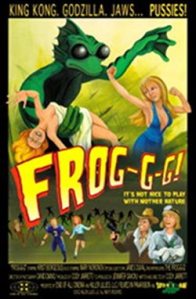 Today I am continuing my “Water Foul” spotlight on the very worst aquatic monsters to ever grace a screen with the low-budget homage/parody: “Frog-g-g!”

“Frog-g-g!” was written, directed, and edited by Cody Jarrett, who has also created a similar-styled  women-in-prison homage in “Sugar Boxx.”

The effects team for “Frog-g-g!” included a couple of veteran makeup and effects artists, Patricia Urias (“The League of Extraordinary Gentlemen,” “Jennifer’s Body,” “Drag Me To Hell”) and Greg Solomon (“Zombeavers,” “Batman & Robin,” “I Am Legend”).

The music for “Frog-g-g!” was composed by Will Flint and Blake Neely. The latter has composed music for numerous television shows in the past few years, including “The Mentalist,” “Arrow,” and “The Flash.”

The cinematography on “Frog-g-g!” was provided by David E. Diano, who has worked as a camera operator on semi-notable films like “SpaceCamp,” “Night Shift,” “Street Fighter,” and “Spider-Man 3.” 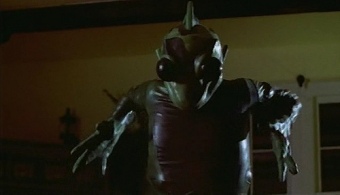 The story of “Frog-g-g!” centers around an EPA investigation into a chemical company that may be polluting the water supply of a small, conservative farming town. It turns out that the pollution is far worse than initially thought, creating a murderous, humanoid frog creature.

“Frog-g-g!” wasn’t particularly well-received, and currently holds a 13% audience score on Rotten Tomatoes along with a 4.4 IMDb rating.

That said, “Frog-g-g!” is actually pretty boring, drags along for a good while. Instead of being a frame, the premise and setup is almost the whole movie, making the film almost more of an “Erin Brockavich” knockoff than a monster movie. 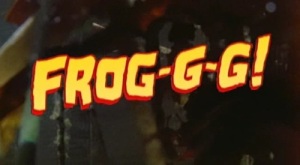 As you would expect, the acting in “Frog-g-g!” is particularly awful (likely by design to a certain degree), particularly on the part of the various “bad guys,” like the big businessman and the corrupt sheriff.

In a lot of ways, “Frog-g-g!” has the opposite problems of “Humanoids from the Deep”: instead of being too serious, it is far too silly. Worse, the film lacks any element of earnest creativity, and feels almost feels like a Troma movie because of it (except that it arguably looks better). In fact, in the behind the scenes documentary about “Frog-g-g!,” one of the crew members specifically says “This is so Troma, it is unbelievable,” in such a way that I assume it was meant positively.

The most entertaining element of “Frog-g-g!” is definitely the frog suit and the monster’s portrayal, which makes it all the more unfortunate how little screen time it gets. Particularly, the overly-dramatic walking and leaping motions are just hilarious.

“Frog-g-g!” contains a surprising amount of social conflict, specifically surrounding conservative vs liberal values. There are blatant criticisms of homophobia, corporate and governmental corruption, urban vs rural values, and pollution scattered throughout the film, which holds true to a good number of classic b-pictures.

It is impossible not to notice the really shitty quality of the movie overall from a production standpoint. Unfortunately, is does not strike me as being done in a classic b-movie sort of way, but rather in a ‘we couldn’t afford to make it look better’ kind of way. That isn’t something I can realistically hold against the film, but it is also something that can’t be easily ignored. 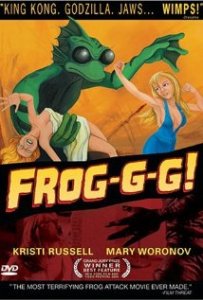 “Frog-g-g!” also makes the decision to feature the same “Alien” knock-off ending as was used in “Humanoids,” and it looks faithfully ridiculous. However, it also seems like the sort of nod that only someone with intimate knowledge of “Humanoids from the Deep” would get, which might not have been the best way to go about this film. If the movie had been a little more broad in its parody of b-films, it might have resonated with a few more people.

Overall, “Frog-g-g!” is kind of dull, with only brief flashes of entertainment. It is certainly better than just about any “Troma” flick out there, but only by a hair. I would only recommend this one for people who really like films like “Creature From The Black Lagoon” or “Zaat,” otherwise it isn’t going to be worth sitting through.