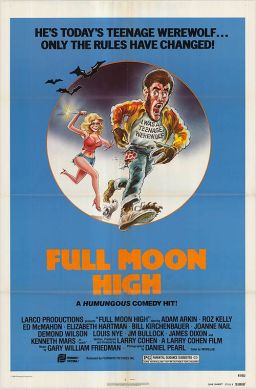 Today, I’m going to be kicking off my coverage of the career of writer/director Larry Cohen with 1981’s “Full Moon High”: a horror parody movie which he wrote, directed, and produced.

The cinematography on “Full Moon High” was provided by Daniel Pearl, whose career goes all the way back to “The Texas Chain Saw Massacre,” and includes a handful of other Larry Cohen films such as “Deadly Illusion,” “A Return to Salem’s Lot,” and “It’s Alive III.”

The score for “Full Moon High” was composed by Gary William Friedman, who is probably best known for providing the music to the television program “The Electric Company.”

“Full Moon High” features makeup effects by Steve Neill, who also worked on such b-movies as “Laserblast,” “God Told Me To,” “The Stuff,” “Battle Beyond The Stars,” and “Saturday the 14th.”

The art director for “Full Moon High” was Robert Burns, who also worked on such iconic horror movies as “Re-Animator,” “The Howling,” “Texas Chain Saw Massacre,” and “The Hills Have Eyes” over his career.

The editor for “Full Moon High” was Armond Lebowitz, who was Larry Cohen’s go-to editor for many of his most well-known features, including “The Stuff,” “The Ambulance,” and “Q: The Winged Serpent.”

The story of “Full Moon High” follows a high school football star who, while on a vacation to Romania, becomes an immortal werewolf. After he discovers how little control he has over his abilities, he leaves his hometown to wander the Earth. 20 years later, he decides to return home under the guise of being his own son in order to win the big high school football game that he never got to play.

“Full Moon High” was dedicated to the memory of Fenton Hamilton, who was Larry Cohen’s cinematographer and director of photography for “Black Caesar,” “It’s Alive,” “Hell Up In Harlem,” and “It Lives Again.”

The reception for “Full Moon High” was generally negative: it currently holds a 39% audience score on Rotten Tomatoes, along with a 4.8 rating on IMDb.

The premise for “Full Moon High” is primarily a parody of “I Was A Teenage Werewolf,” a notorious 1950s horror movie. Most viewers now would probably assume some connection to the movie “Teen Wolf” with Michael J. Fox, but “Full Moon High” actually predated it by a number of years.

There are definitely some brilliant moments here and there throughout “Full Moon High,” but it is really uneven in its quality. As many reviewers have pointed out, the film starts really strong, and then slows down and loses its comedic edge after the first half hour. It feels like a clever movie that didn’t get to percolate long enough to be really outstanding, like it may have been rushed through production too quickly.

That said, there are a number of golden and clever moments interspersed throughout the film. For instance, the use of spinning newspaper transitions, which is one of the most overdone elements in old movies, is poked at brilliantly. There are also other horror and teen movie tropes that get put over the fire, like the overuse of dramatic violin music as a cue. 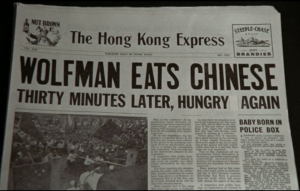 Personally, I think that one of the biggest issues with the movie is that Adam Arkin isn’t quite strong enough to carry the film from a comedic point of view. It certainly doesn’t help that his character is pretty inconsistently written: sometimes he is a bit of a moron, and other times he seems pretty sharp.

The style of humor in “Full Moon High” is also a bit perplexing. It is generally dark and sexually charged, and fairly biting with satiric elements. At the same time, it is also very traditionally goofy, which makes for a weird combination. It also doesn’t help that it has a few awkward moments of jokes that don’t land, which might be due to Cohen not having comedy writing experience previously, and still deciding to write it on his own.

Here are a couple of the memorable quotes from “Full Moon High” that have stuck with me:

“I’m not the type to believe in vampires, werewolves, or virgins. I’ve never seen any of those.”

“They got me Joe. The commies turned my son into a wolf. I don’t know how they did it…might have been something in the water? Fluoride…they say fluoride is good for your teeth. Did you get a load of his teeth? I’ve heard about being long in the tooth, but that’s just too long. Oh Joe, why didn’t they listen to you back then when they had a chance?” 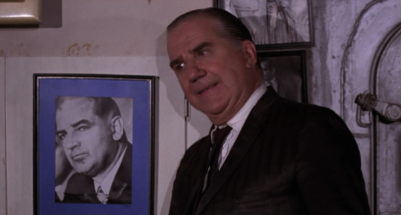 Overall, “Full Moon High” certainly isn’t is good as it could be, but it is undoubtedly more daring and clever that “Teen Wolf.” For big fans of Larry Cohen’s work, it is worth checking out, but it isn’t quite solid enough to recommend to general audiences.