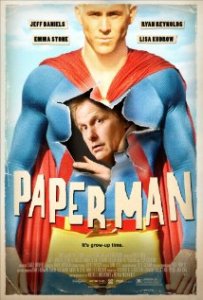 Pitch:
“It is a coming of age story, where Ryan Reynolds plays Jeff Daniels’s imaginary friend from childhood, who is still sticking around as an adult. I wind up recommending it to a lot of people who like Emma Stone, as this was one of her first really big roles.”

“Paper Man” is the creation of a co-writer, co-director team of spouses Kieran and Michele Mulroney. This is the only film that either of them has directed, and their writing credits are also pretty limited: Guy Ritchie’s 2011 “Sherlock Holmes: A Game of Shadows” is the only other major feature attributed to them. However, Kieran has a good number of bit acting roles here and there.  Notably, he is also the brother of the more prolific actor, Dermot Mulroney (“Zodiac,” “August: Osage County”).

“Paper Man” features an interesting cast, including Jeff Daniels (still a couple of years off from his resurgence on “The Newsroom”) and Ryan Reynolds, who was coming off of his role as Wade Wilson in the high budget action flick “X-Men Origins: Wolverine” (a character he is set to reprise in 2016’s “Deadpool”). As Max mentioned, it also features Emma Stone before she really hit the map. Probably my favorite surprise in the cast, however, is Kieran Culkin, who is well known for his roles in “Igby Goes Down” and “Scott Pilgrim vs. The World,” but doesn’t do a whole lot of acting. He also featured in the first two “Home Alone” movies with his brother Macaulay, not that he is particularly recognizable from those.

“Paper Man” was not well relieved by critics or audiences at the time: the film currently holds a 31% score on Rotten Tomatoes, with an average score of 4.7 from critics and 3.2 from audiences. However, for whatever reason, it has a much higher score with the IMDb users, where it currently has a 6.7.

The crew of “Paper Man” includes editor Sam Seig, who has worked on films such as “Minority Report,” “Munich,” and “Catch Me If You Can,” and cinematographer Eigil Bryld, who has worked on the film “In Bruges” and the acclaimed American adaptation of “House of Cards.”

I’ve always liked Ryan Reynolds’s comedic roles, even though he hasn’t necessarily picked them well. In “Paper Man,” he is really the comedic force: Jeff Daniels isn’t absent, but he mostly reacts to other characters, and awkwardly stumbles around the film. Reynolds is a great sort of interior monologue / hallucination for Daniels’s character, and definitely illustrates his self-loathing through the dialogue. Without Reynolds’s comedic timing and superhero good looks, the movie probably wouldn’t work so well. 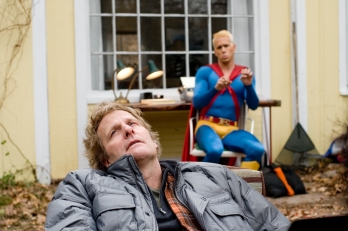 On another front, Emma Stone really proves herself as a dramatic actor in “Paper Man,” and I can see what she started getting better roles after this. Her character has a lot of dramatic weight to haul around in the film, and she definitely makes it work.

The film has a really interesting premise (a writer with an imaginary friend), but it doesn’t quite work here. A number of the characters are just quirky enough to be beyond belief, but not enough to be outlandishly entertaining on their own. Also, Daniels and Culkin often just come off as…creepy. These are both actors I like, but something about the way they are written is at times off-putting and uncomfortable, and I definitely don’t feel any sort of connection to them (which I assume was intended). Culkin’s character and behavior starts to make a lot more sense as the movie goes on, at least. Again, Reynolds is great comedically and Stone is fantastic dramatically, but the rest of the world around them just isn’t quite up to par. The film also seems to drag on longer than it particularly needs to, but that might just be because there isn’t a whole lot interesting going on (particularly whenever there is an extended on-screen absence of Ryan Reynolds). However, when either Daniels/Reynolds or Daniels/Stone are on screen together, everything clicks into place fantastically either dramatically or comedically, depending on the combo. It is kind of a shame that the rest of the film fails to live up to their respective chemistry. 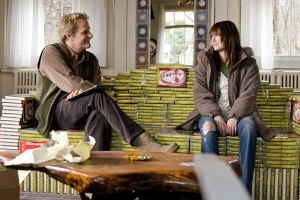 When it comes down to it, this is a film I can certainly recommend to people who are fond of quirky indie comedies. It isn’t great, but if that is your cup of tea, it is probably worth a watch. Outside of that, I can recommend this to people who are either curious to see a more obscure Emma Stone role, or to anyone who is just dying to see Ryan Reynolds in spandex outside of “Deadpool” or “Green Lantern.” I wish it held together better, but the product as it exists isn’t bad. I think critics were mostly just over-saturated on quirky indie comedies at the time, and were perhaps a bit too harsh on it as a result.