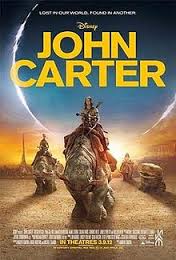 Today, I’m going to cover what could have been the start of a massive science fiction franchise: 2012’s John Carter.

The plot of John Carter is summarized on IMDb as follows:

Transported to Barsoom, a Civil War vet discovers a barren planet seemingly inhabited by 12-foot tall barbarians. Finding himself prisoner of these creatures, he escapes, only to encounter Woola and a princess in desperate need of a savior.

John Carter was directed by Andrew Stanton, who has also helmed the hit Pixar films Wall-E, Finding Nemo, and Finding Dory, and directed two upcoming episodes of the hit television show Stranger Things. Stanton also had a significant hand in the film’s screenplay. His previous writing credits date back to the early days of Pixar: Toy Story, A Bug’s Life, Toy Story 2, and Monsters, Inc, most notably. Interestingly, prior to John Carter, Stanton had never directed a live action feature.

The other writers for John Carter were Mark Andrews, the writer/director responsible for Brave, and Michael Chabon, who contributed to the story for Sam Raimi’s Spider-Man 2.

John Carter is based on the first book in the Barsoom series by Edgar Rice Burroughs: “A Princess of Mars,” which had been a target for a major film adaptation dating back to 1931. 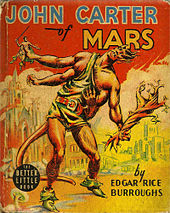 The cinematographer for the film was Dan Mindel, who has shot movies like Star Trek, Enemy of the State, Domino, Mission: Impossible III, Spy Game, and Star Wars: The Force Awakens, among others.

The editor for John Carter was Eric Zumbrunnen, whose other notable works include Her, Adaptation, Where The Wild Things Are, and Being John Malkovich.

The John Carter musical score was composed by Michael Giacchino, who has provided music for such notable films as Rogue One, Doctor Strange, Zootopia, Jurassic World, Jupiter Ascending, Up, Speed Racer, and The Incredibles.

Apparently, at one point in the film’s lengthy pre-production, Robert Zemeckis turned down an offer to direct, specifically citing that George Lucas already mined too much material out of the series for the Star Wars franchise.

Jon Favreau, the actor, writer, and director known for movies like Iron Man, Elf, The Jungle Book, Swingers, and Chef, was attached to direct John Carter in 2005, but left after a number of delays to take on Iron Man. When Andrew Stanton ultimately took the director’s role, Favreau requested to be included in the film as a voice extra, and is credited as one of the Tharks.

Critically, the reception for the film was mixed. Currently, it holds an IMDb user rating of 6.6/10, along with Rotten Tomatoes scores of 51% from critics and 60% from audiences.

In The Atlantic, Christopher Orr wrote a review of John Carter in which he praised the film’s “likable whimsy” and “hokey charm”:

…there is a hokey charm to John Carter, a clear understanding that, at the end of the day, we are there to have fun. Stanton has scattered throughout the script a surprising number of genuinely witty moments. (I laughed more during the film than I did during Adam Sandler’s last three comedies combined—which is a long way of saying, I laughed.)

As Orr mentions, I was surprised to find how much fun and genuinely clever humor made it into the final screenplay. Two of my favorite sequences in the film were made by comedic dialogue: the monologue interruptions at the beginning of the film, and the prisoner escape towards the climax. While these were undoubtedly two of the best bits in the film, they were just as much made by their performers, Bryan Cranston and James Purefoy, respectively, as by their writing.

This brings me to one of my biggest problems with the movie: there are just too many characters. Or, rather, too many underused characters. Both Bryan Cranston and James Purefoy, who are huge highlights in the movie, are either entirely dropped or relegated to minimal background roles following their aforementioned sequences. I can’t recall either characters’ names, what they stood for, or what defined them, which is a bit of a problem. There are already a lot of complicated ideas and plots spinning around in the film, so I kind of understand why the characters aren’t given much attention, but that is a bit of a problem to itself. There are more than a few moments of science-fiction jargon-babble that weigh down the screenplay, which could have benefited from some tweaking. Mostly, this just felt like some unfortunate wasted potential.

Something that surprisingly stood out to me about John Carter were the visual effects: overall, they still look pretty good, which is really saying something for a movie that is a number of years old. Typically, technological progresses make movies look outdated quickly, but John Carter still looks pretty ok by today’s standards. It still probably won’t age well, but holding up for this long is still impressive.

Aside from the effects, John Carter is still a very visually pleasing movie. The production and costume designs are all top-flight: the world looks and feels unique and tangible, and each of the civilizations look distinct from each other. The color palette may feel a bit overused now, but the combination of sandy oranges and bright blues does give John Carter a striking appearance, without any doubt.

In his aforementioned review for The Atlantic, Orr also hit on one of my favorite aspects of John Carter: the bizarre animal companion, Woola.

the most indelible performance in the film…would be Woola, a six-legged, razor-toothed Martian hound who…rather resembles a cross between a bulldog and a fetal gila monster…he’s not much in the looks department, but it’s been some time since cinema has seen a more adorable sidekick.

To say that Woola (who I call the DogFrog) is god damn adorable is a massive understatement. The Pixar influence on the film is most evident through him: his charm, appearance, and physical performance all seem like they were lifted straight out of a Pixar short of feature. Interesting, unlike Jar-Jar Binks in the ill-fated Star Wars prequels, he never feels out of place, even when at his peak of comic relief. This could easily have gone awry, but if there is anything the Pixar lot can do well, it is blend the heavy spices of drama and comedy successfully.

While John Carter may not be a masterpiece, I think it is quite a bit better than its reputation indicates. It is uneven for sure, but there are enough fun moments and highlights to make it worth checking out if you ask me. It clearly suffered from some really lackluster marketing: I always assumed it would be a big, dumb action movie. While it is, at least on some level, exactly that, there is more substance to this film that you could glean from its trailers.