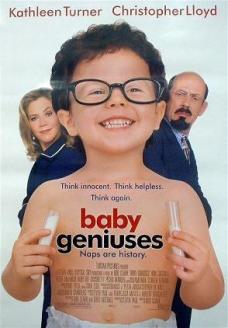 One of the great questions surrounding the stalwarts of the IMDb Bottom 100 is “Which is worse, ‘Baby Geniuses’ or ‘Baby Geniuses 2?'” In general, most seem to think less of the Jon Voight led sequel. However, The Nostalgia Critic made an interesting case for the first movie being the lesser. Personally, I agree with NC on this one: I think that despite “Baby Geniuses 2” being the more incompetent movie (which is saying a lot), Jon Voight’s performance manages to make it a more entertaining watch than “Baby Geniuses”.  “Baby Geniuses” does have its own cast of self-debasing actors, most notably Christopher Lloyd (“Back to the Future”) and Kathleen Turner (“War of the Roses”), but neither of them get the same kind of screen time or go to nearly the same over-the-top lengths as Voight does in the sequel, which is strangely kind of a weakness to “Baby Geniuses” when it comes down to a comparison. 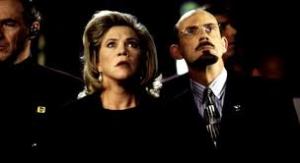 “Baby Geniuses” has one particular sequence that qualifies, surprisingly, as unadulterated nightmare fuel. For whatever reason, a lot of the plot takes place around an amusement park that features a host of remote-controlled animatronic creatures. Among these animatronics are Santa Claus, a terrifying clown that could put Tim Curry to shame, and a horrific 8-foot baby that is equipped with a speaker. During the climax of the movie, the genius babies take over the animatronics to create a distraction, which leads to a horrifying battle between a small army of security personnel and a robotic horde of terrifying animatronics, led by a bellowing giant baby. It is really unsettling and out of place to say the least. 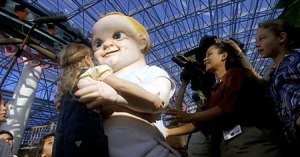 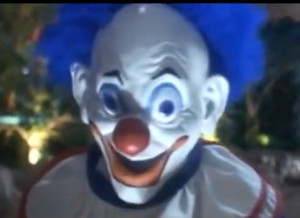 “Baby Geniuses” mercifully doesn’t resort to the cheesy computer generated effects that the sequels do, but the stunts and voice-over work are aggravatingly obnoxious none-the-less. It goes without saying that the babies weren’t exactly stellar actors, and it isn’t like there was much anyone could do about that (apart from not making a movie about babies). Does that make it forgivable? Absolutely not. The experience of watching babies giggle and flail while adults provide their voices is miserable, even if it was all unavoidable by the picture’s very design. 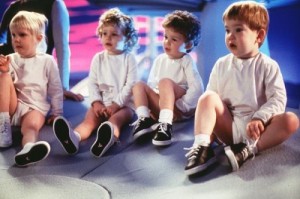 There is an interesting question to be asked of the “Baby Geniuses” franchise: who is the target audience of the movies? Are young children supposed to be enjoying these movies? Are babies supposed to be gawking at the noises and colors? Or is the goal of these movies to entertain elderly people who find babies unbearably cute? Honestly, I’m not convinced that the people behind the franchise are totally sure of this. It seems like these movies aim for all of these targets, which is almost certainly part of why they are ultimately so damn weird.

One of the strangest aspects of this movie involves a mysterious maturation process that all of the babies go through when they hit 2 years old (if I recall correctly). Without much warning, it is shown that each baby character loses all of their memories and thoughts as they turn into…actual people? In any case, all of the babies are aware of this process, and they face it not unlike an adult would face the prospect of death. Essentially, the characters are dying: all of their defining characteristics and personalities disappear in the blink of an eye. To say that this is really bizarre to see in a movie about super-intelligent babies is a massive understatement. I did not expect to see babies go through an existential crisis when I turned on this movie. I mean, who would?

If there is anything positive to say about “Baby Geniuses” it is that the plot is very straightforward. It boils down to a simple case of mistaken identity, which is as close as the movie ever gets to being Hitchcock-ian. In any case, there isn’t anything particularly wrong with the plot or the structure of the film: all of the frills on top of it are just shitty.

Overall, it is impossible to recommend “Baby Geniuses” as an enjoyable bad movie. Most of the film is just boring when it comes down to it, and there are very few sequences that prove entertaining. To the sequel’s credit, there are certainly more bafflingly watchable moments to be had there, courtesy of the Academy Award winning actor Jon Voight. The most I can recommend is to find a supercut of highlights of the two movies, or check out detailed video reviews of them.