Knoxville, Tennessee is a lovely city in East Tennessee, famous for being the home of the Tennessee Valley Authority and the University of Tennessee. It is also only a few miles from the Great Smoky Mountains National Park. 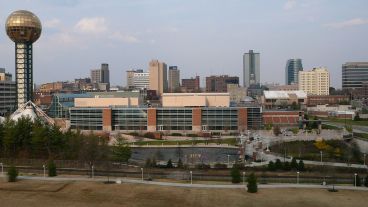 Recently, I took a trip to the area, and my route took me right through the heart of Knoxville. As always, I decided to take some time to check out a record store in town. In this case, I spent a little portion of my trip digging around in a shop called Basement Records. 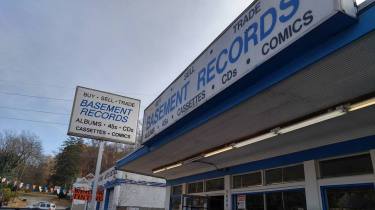 Basement Records is, to start off with, a cool little shop. The folks working the front also seemed like pretty cool people, which is a boon for a little shop like this if you ask me. It is adorned with all sorts of posters and playbills that cover seemingly every inch of wall space, and boxes of records sit everywhere you look. An entire row of boxes are dedicated to soundtracks, which is always cool to see. There were also a handful of DVDs and VHSs in the shop, but they were primarily concerts, performances, and music documentaries. For those that weren’t, the price just wasn’t right for me. As I recall, DVDs were $4 a pop, which is pretty far from a steal for older, used stuff. Still, it made for some fun sifting, even if I didn’t ultimately walk away with any movies. 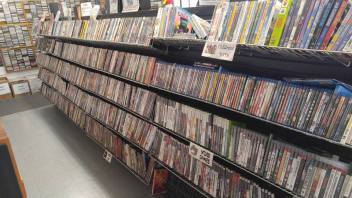 However, digging through the soundtrack selection yielded some interesting and off-the-wall stuff, as you can see below.

I have a full feature written and queued up about this cult classic Sylvester Stallone flick, so I won’t go into too much detail here. However, I will say that I recommend checking it out. Also, it has an interesting soundtrack that varies in style, and hybridizes pop music of the 1970s and 1980s. It features artists like Miami Sound Machine, Gary Wright, and Gladys Knight, just to name a few. The score was composed by Sylvester Levay, who wrote the 1975 hit single “Fly Robin Fly,” and also composed music for Mannequin and Hot Shots.

1941 is regarded as one of the few career missteps of Steven Spielberg, and has a place etched in cinema history because of it. In spite of an all-star ensemble cast, the movie is incredibly uneven, and lacks the comedic core necessary to hold it together. I did a whole write-up on it some time ago that goes into a lot of detail on it if you are curious. However, it notably features a score by the legendary film composer John Williams, and it is a damn good one. I remember playing the memorable march from the movie with my high school symphonic band, and the whole score is really worth a listen for people who like wind ensemble and marching band style music. If that is your bag, you have to check it out.

They Call It An Accident

They Call It An Accident is apparently a French movie from 1982 that was written, directed, and prominently stars French actress Nathalie Delon, but good luck finding out anything else about it. At this time, it has a whopping 7 total user reviews on IMDb. Despite that, the movie’s soundtrack boasts the likes of U2, Steve Winwood, and Wally Badarou, which is really something for a movie that apparently no one has ever seen. My girlfriend is the one who pointed this one out to me from the stacks, mostly because of the strange album art. Despite my best efforts at this point, I still have no idea what this movie is about, or how someone could get a hold of it.

Every Which Way But Loose

Every Which Way But Loose is a Clint Eastwood action/comedy movie that co-stars an orangutan. It is kind of like a combination of Over The Top and Road House, but with an orangutan thrown comedically into the mix. 1978 was a weird time for the world.

The primary reason that this particular soundtrack stood out to me is because I have heard the film’s theme song, which is way catchier than it should be.

The music for the movie was conducted and mostly composed by Steve Dorff, whose mixture of pop country music and television score writing has earned him a handful of Grammy and Emmy nominations. He has also done a fair bit of film scoring, such as for Dudley Do-Right, Pink Cadillac, and Pure Country. He is also interestingly the father of actor Stephen Dorff.