Cushing/Lee ’72 is a ticket that would have gotten my vote.

A couple of days ago, I decided to dive into my immense backlog of DVDs to find some blog fodder. I was planning to watch through some Hammer films to compare with Tim Burton’s “Sleepy Hollow”, based on an interesting theory I came across on “The Nostalgia Critic” last week.

That “Sleepy Hollow” theory is something I may get into at another time.  In any case, I pulled a couple of Christopher Lee / Peter Cushing combos out of my collection, and popped them in for an evening of British horror. I honestly assumed from the casts that both would be Hammer films, which I don’t think was an outlandish assumption for a film from that time period. Interestingly enough, only one of them was Hammer, but both films came from the good ol’ year of 1972.  Also, they were both thoroughly delightful. So, here they are!

First up is a delightful international flick called “Horror Express.” A couple of months ago, this was recommended to me based on some of the outrageously ridiculous science in the film, so I decided to pick it up when I spotted it in the bargain bin.  What they didn’t mention is that the film is an absolute blast, and the cheesy pseudo-science in the plot is just icing on the cake.

There is a mad monk, a snarky Soviet commander who takes over the train (played by Terry Savalas, who is awesome), pale-eyed zombies, a possessed defrosted neanderthal, and an alien adversary that kills people by staring at them with glowing red eyes. It is a delightful time, and the whole thing is hanging out on YouTube.

Nearly the whole movie takes place on the Trans-Siberian Express, which gives the movie an interesting claustrophobic vibe (one of many things that reminded me of “The Thing” in this movie). Cushing and Lee play rival anthropologists who coincidentally wind up on the same train, but they learn to cooperate fast when things turn bad. Lee’s character has discovered a corpse he believes to be the “missing link” in the history of human evolution, and tries to hide his cargo for the first section of the film. Of course, things go wrong when the ancient corpse wakes up and starts killing people. It winds up being dispatched pretty quickly, at which point Lee and Cushing poke at its eyeballs a bit during an autopsy. After looking at images of dinosaurs and space in the creature’s eyeball fluid under a microscope, they come to the brilliant conclusion that the missing link was possessed by a parasitic alien, and that the parasite has found a new host on the train. Spooky!

The rest of the movie involves some great alien possessions, care bear stare deaths, a train explosion, and some generally delightful practical make up effects. Here are a few stills:

I can’t recommend “Horror Express” highly enough. It dances along the line of being a good-bad movie and being just a good movie, but it is a train-load of fun either way. It might actually be my favorite Cushing / Lee movie, though there are a lot of good ones out there. Including the next flick… 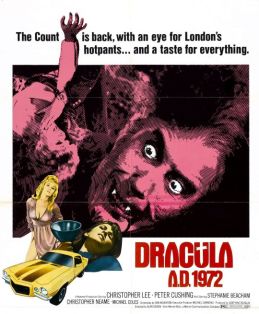 “Dracula AD 1972” is one of the later Hammer films Dracula movies, and probably the most ridiculous of the bunch. It starts with the supposed final battle between Cushing’s Van Helsing and Lee’s Dracula in 1872, which ends with both men dead (Lee is notably impaled to death by the spokes of a broken buggy wheel).

The movie then hops to the modern setting of 1972 (100 years to the day), where a young man named Alucard is dead set on reviving Dracula. He is played very hammily by Christopher Neame, who went on to have a successful career as a television character actor. Honestly, he is most of the reason why I like this movie so much. He goes over the top and beyond as Dracula’s #1 fan.

Through a particularly silly string of events featuring a plethora of 1970’s slang, partying, and astounding British-ness, Alucard successfully resurrects Christopher Lee’s Dracula via a blood sacrifice (of a Bond girl, no less) in an abandoned church. Dracula immediately makes it clear upon his reconstitution that he has come back specifically to wipe out the Van Helsing clan, but doesn’t do a whole lot to see that goal through. Most of the actual vampiric antics are left to Alucard and his goon, during which time Dracula presumably just hangs out in the abandoned church, mostly satisfied to let others take revenge for him.

Most of the movie plays out kind of like a cop drama, with Peter Cushing offering advise to a somewhat skeptical police investigator who is digging into the string of clearly vampire-inspired murders of the Van Helsing granddaughter’s friends. My favorite piece of advice Cushing gives to the cops is that they should look into Alucard as a prime suspect, because his name spelled backwards is “Dracula”. That is some deep detective work.

As you might expect, the young Van Helsing girl is ultimately kidnapped by the Dracula gang, leading to a pretty underwhelming final battle between Cushing and Lee that involves a tiny spiraling staircase. More notably I think is the fact that Alucard is dispatched by Van Helsing via a shower.

“Dracula AD 1972” isn’t quite as fun or as good as “Horror Express”, but it was still a pretty good watch. The Alucard character and all of the 70’s youth slang are hilarious, and the Satanic blood sacrifice scene is delightful. Really, the first 30 minutes or so has most of the best parts, between the wagon chase battle opening, the Satanic sacrifice, and the 1970’s youthful partying. I’d recommend giving it a watch if you want to see a campy Dracula movie, or just need an emergency dose of the early 70’s in your life.

Ah, and last but not least, “Dracula AD 1972” has a theme song for the ages. It is just amazing. Nothing says Dracula quite like funky french horns and saxophones. Give it a listen: