You can check out the first installment here.

Track of the Moon Beast

From Justin to Kelly 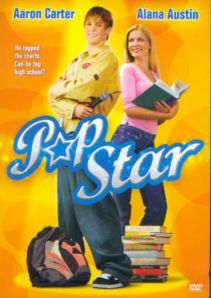 “Popstar” is one of the few movies in the IMDb Bottom 100 that I had never heard of before. I seem to recall Aaron Carter’s very brief celebrity status, but definitely don’t recollect his even briefer acting career.

“Popstar” is plagued with some of the same issues that sank “From Justin to Kelly”: namely, the primary acting role is thrust onto a celebrity who is in no way an actor. Carter clearly struggles with all of his lines, and sounds like he is uncomfortable with the pressure of acting (even though he is essentially playing himself). It made me curious as to how he wound up in this movie: was it an obligation, as was the case in “From Justin to Kelly” for Guarini and Clarkson? In any case, his performance is abysmal, and is a major weakness of the film.

I have to say though, I was impressed with the writing on this movie. I didn’t think a high school movie could be more detached from reality than “Bratz”, but “Popstar” manages to do it.

The lead character (Carter’s love interest) is one of the most perplexing piecemeal characters I have run into. She is a superfan of Carter’s whose room is covered in his image, but she is also an academic perfectionist who goes through an ugly duckling arc. She is said to have a perfect SAT score and pending full rides to a number of universities. So, there are a few issues with this: first off, there is just way too much going on with this character, and it is all way overboard. She isn’t just a fan, she’s a superfan. She isn’t just smart, she is supersmart. Also, there’s is the significant issue that most of these qualities are told to the audience instead of shown, so it comes off as even more extreme as it is bludgeoned into your face. Worse yet, her actions don’t actually support the things we are told about her, particularly in regard to her academics. For an example, here is the last shot of the movie: 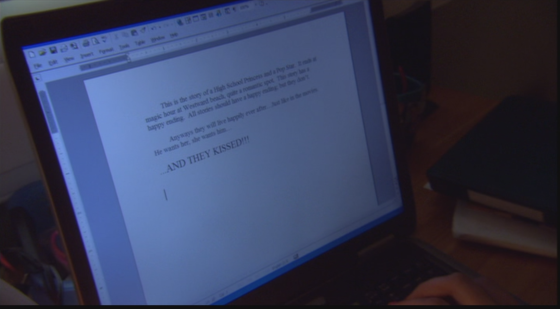 This is a story that she writes, that is supposedly a veiled parallel to the romance of the movie. She reveals the story’s existence to Carter in a flirtatious concluding scene, after which the shot fades into this image of the computer screen. Keep in mind, this was written by a character who we have been told has standing offers for full rides to Stanford and UC-Berkeley. Here is the transcript of her story:

“This is the story of a High School Princess and a Pop Star. It ends at magic hour at Westward beach, quite a romantic spot. This story has a happy ending. All stories should have a happy ending; but they don’t.

Anyways they will live happily ever after…Just like in the movies.
He wants her, she wants him…

That’s it. That is the whole story. Again, it was established earlier in the movie that this character had perfect SAT scores, and is basically the most brilliant academic for miles. I just can’t even wrap my head around this. I mean, the existence of the story could have easily just been a veiled metaphor about their relationship for the sake of dialogue and a happy conclusion, but she actually typed this up according to the final shot. She clearly couldn’t have felt too strongly about this tale of love, because that isn’t even a decent plot or structural outline. For a character established as an extreme academic perfectionist, that is some shoddy work to say the least. Does this mean she doesn’t care about her relationship as much as her schoolwork (or even enough so to put forth an effort), or has she learned to sacrifice her perfectionism and just let things in her life be imperfect? Ok, maybe I’m getting it: this is her accepting the reality of a flawed world, and her imperfect place within it. Brilliant.

Adding to the fantasy-world quality of “Popstar” is the central conflict of the plot. Carter has only come to the school and befriended the Super-Genius Girl in order to cheat off of her to pass his classes. When it comes time for the exams, he winds up getting caught. In reality, this result in a failing grade without any doubt. In “Popstar”, Carter is given a second chance due to the persuasive power of monologues, and because he apparently has testing anxiety. As I understand it, having testing anxiety is something that should be divulged to the teacher and consulted on with parents, and ultimately worked out in a way that can alleviate the student. It is not, however, an acceptable excuse for cheating on a test. Regardless, Carter is given his second chance, but this time he is allowed to take his test on a lit stage in the school auditorium, because reasons. Not only does he pass the test, he apparently does better on it that SuperGenius (She didn’t get a perfect score? That doesn’t seem consistent).

The last problem with this movie that I will mention (trust me, there are more) is the cast. Note that the problem here is the cast, not the acting (that is a different issue altogether). There are so many characters in this movie, and barely any of them are on screen enough to matter. I couldn’t keep up with the names or their relationships to the primary characters in the slightest. There were stepmothers, best friends, bullies, mothers, fathers, wise janitors, agents, nerds, and teachers who all just wandered in and out of the movie with minimal introductions and very little to do. This may be the worst job of character introductions I have seen outside of “They Saved Hitler’s Brain”, and there is absolutely no excuse for it.

Between the abysmal acting, vapid story, and weak writing, there isn’t actually much to enjoy in this movie.  It is certainly incompetently made and generally bad, but it doesn’t have a whole lot of charm to it. It isn’t nearly as contrived as “From Justin to Kelly”, but it is only a stone’s throw away from that level of exploitative garbage. It isn’t a movie I can recommend, but I will say that I had a good chuckle at that last shot of SuperGenius’s magnum opus.

…AND THEN THEY KISSED!!!