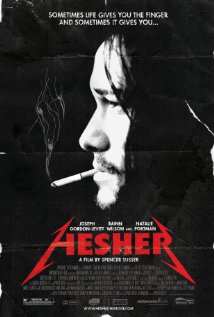 Pitch:
“It is like ‘Metalocalypse’ meets ‘Mary Poppins.’ It is probably my favorite Joseph Gordon-Levitt role: he plays a stoner asshole, but he manages to help the other characters get over the loss of their wife/mother.”

Spencer Susser, co-writer, editor, and director of “Hesher,” doesn’t have a whole lot of credits to his name to delve into. For the most part, he has only created a handful of short films over the years since 1999, perhaps most notably the mockumentary “R2-D2: Beneath the Dome.” “Hesher” remains his only full-length feature, and his only notable work recently is directing a 2014 episode of the Netflix series “Hemlock Grove.”

The writing team behind “Hesher,” outside of Susser, consists of writer/director David Michod (who has gained acclaim for his recent films “Animal Kingdom” and “The Rover”) and a guy named Brian Charles Frank, who at the time had no other credits. However, Frank more recently wrote a television show called “Wolfpack of Reseda” for Fox Digital Studios, but doesn’t appear to have anything else in the pipeline.

The cast of “Hesher” not only includes Joseph Gordon-Levitt in the title role, but also a handful of Hollywood regulars, including Rainn Wilson and Natalie Portman. The movie technically centers on a child character, meaning that there is a lot of pressure put on the lead child actor in Devin Brochu, who has been in movies like “Rubber” and “In the Valley of Elah.” The rest of the cast includes the much-lauded Piper Laurie (“Carrie,” “Twin Peaks,” “The Hustler”), character actor John Carroll Lynch, and another child actor in Brendan Hill.

Although “Hesher” was nominated for the Grand Jury Prize at the 2010 Sundance Film Festival, it didn’t get much love from critics in general. It has a Rotten Tomatoes score of 54%, with an average rating of 5.7.  Audiences seem to appreciate the film a bit more, as it holds an IMDb rating of 7.1 and a Rotten Tomatoes audience score of 61%.  Still, those aren’t exactly stellar numbers.

The character of Hesher is reportedly based on Metallica bassist Cliff Burton: a long-haired, hard-partying musician who was killed in a bus crash in 1986. Appropriately, the soundtrack of “Hesher” includes a number of Metallica tracks that feature Burton.

Much like another movie I recently reviewed, “House of Yes,” “Hesher” is fairly dependent on one character. Unsurprisingly, that character is Joseph Gordon-Levitt’s title role of “Hesher.” Almost everything that happens in the film is somehow catalyzed by Hesher, or is done in reaction to him. However, he is interestingly not the main character: he is just a roving force of destruction that creates the plot in his wake. It probably goes without saying, but JGL is thoroughly impressive in the role.

The actual lead of the film is portrayed by Devin Brochu, whose character is a young child trying to deal with the recent death of his mother and family’s financial hardships (not to mention an obnoxious school bully). For a child performance, it is beyond impressive. It is always a gamble to put a kid in the dramatic center of a serious movie, but in this case it certainly paid off. I hope Brochu sticks around in film, I’m looking forward to seeing him in more things in the future.

Brochu’s father is played by Rainn Wilson, who is maybe the most under-appreciated dark comedy actor out there today. Though he is best known for his role from the American adaptation of “The Office,” Wilson has been brilliant in movies like James Gunn’s “Super,” and has just recently started a leading role in the dark comedy cop show “Backstrom.” In “Hesher,” his character is a straight foil for JGL, but the intensity and sorrow that Wilson brings to the role is incredibly humanizing for a character that could easily have been dull and forgettable. 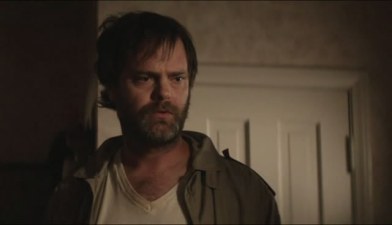 In general, this is a film that is powered by performances. The only real weak spot I noted was Natalie Portman, who doesn’t really have a whole lot to do in the movie: her character doesn’t get the same kind of screen time or opportunities as most of the others, making her more or less just a distant satellite in the story.

Spencer Susser earned a commendation for “Best First Time Director” at the Philadelphia Film Festival for “Hesher,” and I think it is definitely well-merited. The way the film is shot plays a solid role in how the drama plays out, and a number of moments are particularly impressive at building tension. I also really like how the film is lit: the only time anything is brightly lit or colored is during a flashback sequence, which not only makes it stand out, but also emphasizes the dark ambiance of the movie in general. It is subtle enough that you don’t particularly notice it, which basically means it is done well.

I can recommend this one pretty heartily. The performances and direction are really solid, and I definitely don’t see eye-to-eye with the critical detractors on this one. A number of the complaints I saw cited issues with the narrative flow and with the general vulgarity of the movie, and more specifically with the lack of likeability in the character of Hesher. While the plot is slow, I don’t see  how the vulgarity or unlikeability of Hesher is a weakness to the film: it is kind of essential to it. “Hesher” is a quirky indie movie to be sure, and it is definitely rough around the edges, but there is enough good going on in this movie to forgive some of the indie stereotypes it holds to. It is by no means a great movie, but it is definitely in the realm of “good.”