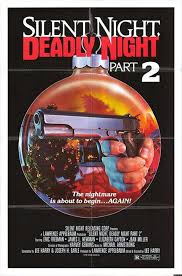 Today’s feature is a seasonal favorite in the realm of bad movies: Silent Night, Deadly Night 2.

Silent Night, Deadly Night 2 was co-written, directed, and edited by Lee Harry, who only had a handful of other low-budget credits over his career.

The primary producer for the movie was Lawrence Appelbaum, whose other credits included Charles Band’s The Alchemist, Penitentiary II, and Badge 373.

The plot of Silent Night, Deadly Night 2 is summarized on IMDb as follows:

Ricky, the brother of the killer in the first film, talks to a psychiatric about how he became a brutal killer after his brother died, leading back to Mother Superior. 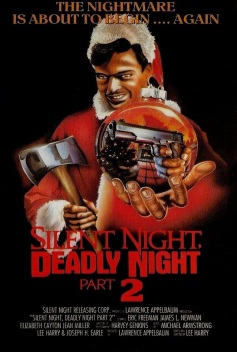 Silent Night, Deadly Night 2 is particularly well known due to the popularity of an out of context sequence of the movie that was circulated on the internet, in which the lead character hilariously murders someone while shouting “Garbage Day!”

Initially, Silent Night, Deadly Night 2 wasn’t intended to be a sequel, but an extended re-cut of the original movie with a a re-shot framing device. Ultimately, there was enough unique material for it to be labeled as an independent movie, though it still relies heavily on stock footage from the preceding feature.

The reception to Silent Night, Deadly Night 2 was negative from the handful of people who wound up actually seeing it when it was released. While the viral clip certainly expanded its audience in the past few years, there still isn’t any love to be found for this film. Currently, it holds a 3.5 user rating on IMDb, along with a 30% audience score on Rotten Tomatoes. 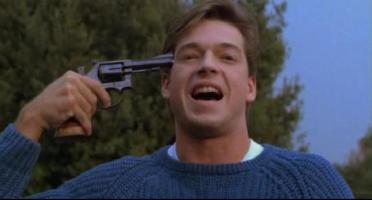 The reason that this movie has entered the public consciousness at all is because of the lead performance by Eric Freeman, which is without a doubt memorable. In his brief time on screen, he manages to be so laughably terrible and over the top that the movie is almost worth watching as a result.

Overall, this movie isn’t really a complete movie at all. This is the equivalent of DLC content on a video game being sold as a standalone sequel at full price, which is roughly as dishonest as it is disappointing. The new content that is here is entertaining, but there just isn’t nearly enough of it, making this a totally half-assed feature. For the “Garbage Day” sequence alone, this is worth checking out. However, you shouldn’t expect too much from it, and I would generally recommend the original movie or Christmas Evil over this flick any day.

For more thoughts on Silent Night, Deadly Night 2, I recommend checking out the coverage of it over at The Cinema Snob and Antagony & Ecstasy.