Marietta, GA sits just Northwest of the Atlanta, GA beltline, just on the edge of the greater metropolitan area. It home to one of the few remaining CD Warehouse locations in the area, along with sister shops in Duluth and Roswell. I’ve been to a few different locations of the chain in Tennessee and North Carolina over the years, but they have been rapidly dying off in recent years as they have generally failed to adapt to the new landscape of the business.

As far as quality goes, it has always been a crapshoot with CD Warehouses for me. Sometimes they would have terrible selections and awful prices, and other times they would have a wealth of off-the-wall flicks on sale. After wrapping up at DragonCon, I decided to drop by the Marietta, GA location on my way home to see what they might have laying around. (Side note: conventions like DragonCon are garbage for DVD hunting. You might find a bootleg of a rare video, but you are just as well-off hunting online for how much vendors will charge and how bad the quality will be. Unless you want the novelty of directly purchasing a movie from Troma, don’t buy movies at cons.) 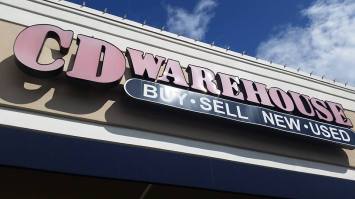 Lucky for me, this turned out to be a fantastic haul, and probably the best I have ever pulled out of a CD Warehouse. 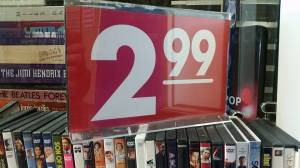 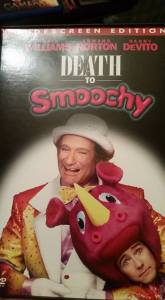 With the death of Robin Williams last year, I feel like people have been going back to give this movie another shot. Critics at the time panned it, but it has gained some cult acclaim over the years after running on Comedy Central through countless late night blocks. This may very well have been a nail in the coffin of Danny DeVito’s directing career, as he has since careened into the world of self-parody. However, I have always liked the twisted take on the competitive world of children’s entertainment, and personally regard it as on par with (or better than) DeVito’s other directorial works. That said, it has been a while, and I’ll be interested to see how it holds up now. 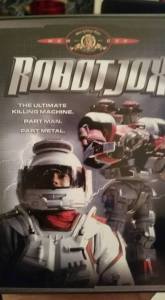 Until the Shout! Factory release of a Blu-Ray this summer, it was not particularly easy to come by a physical copy of Stuart Gordon’s Robot Jox. Back when I reviewed it, I happened to come across the flick on YouTube, but I won’t deny that I desperately wanted a physical copy of this cult classic robot beat-em-up. Sure enough, I finally have myself a copy of the original DVD release! This is a movie that I can’t recommend highly enough, and it is nearly mandatory viewing for fans of good-bad movies. I might still pick up that blu-ray soon as well…

Gamera: Guardian of the Universe / Gamera 2: Attack of Legion / Gamera 3: Revenge of Iris 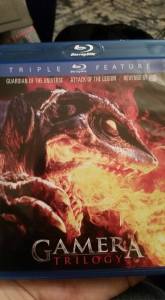 This is a collection of the Hesei era Gamera movies, also known as the Gamera trilogy. I did a marathon of the hilarious Showa era Gamera movies last year, but I have been hearing that these Hesei flicks are actually pretty fantastic watches. Now that I have copies (on Blu-Ray no less), I’ll have to finally give them a watch. 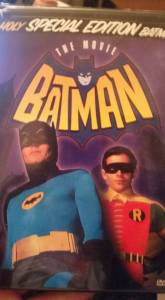 We all know this movie. The feature-length spotlight on Adam West’s campy version of Batman is unforgettable, from the cast of villains to the giant bomb to the shark repellent bat spray. At the very least, this movie is a nostalgia trip of the highest order. 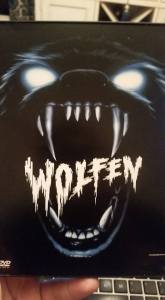 This is arguably the most under-appreciated werewolf movie out there, and it is also a flick I have never had the chance to sink my teeth into. I’ve heard a lot of good things about it, but had never come across a copy of it until I spotted it here. 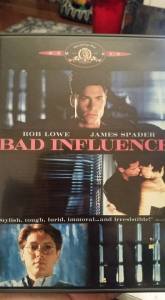 James Spader and Rob Lowe are two guys that I just can’t help but like, regardless of the movie or television show they pop up in. David Koepp, the writer on this movie, has been responsible for everything from the Dolph Lundgren cult classic I Come In Peace to blockbusters like Jurassic Park and Mission: Impossible, as well as the tragically underrated Nic Cage / Brian De Palma movie Snake Eyes. Director Curtis Hanson went on to helm flicks like L.A. Confidential and 8 Mile, so I have every reason to believe that this is going to be a movie that is worth my time. It made some money back when it released, but never got big enough to enter the public consciousness, which is probably why I have never heard much about it. The premise and casting has me curious though, so I’m eager to see what it has to offer. 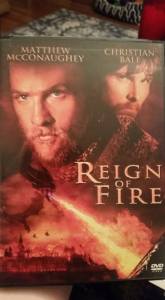 The career of Matthew McConaughey in the era before the McConaissance was a dark and strange place. Back in 2002, he starred alongside fellow future-stars Christian Bale and Gerard Butler in the bizarre dystopian fantasy film Reign of Fire. Some people remember this flick fondly, but critics and audiences at the time widely panned it. That said, reviews seem to have softened over the years, indicating that it may be time to give it another shot. I have’t watched it in roughly a decade, so I’m curious to see how it holds up.

Catch Me If You Can 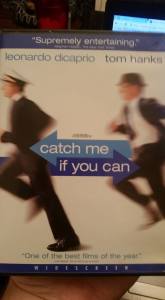 Catch Me If You Can is one of my favorite Steven Spielberg movies, if not my hands-down favorite. Really. I think it is John WIlliams’s best score (or at least in the running), one of both Leo’s and Hanks’s best performances, and is one of the best biopics out there. It blends suspense, comedy, drama, and style effortlessly, and is a rare movie that seemed to please audiences and critics alike. For whatever reason, it often gets shoved aside when discussing the career of Spielberg, which I think is unfair. The movie is one of the most well-balanced films in his filmograpy, which is made of up of a mixture of man-child indulgences (E.T., 1941, Hook), blockbuster fodder (Jurassic Park, War of the Worlds) and excessively heavy dramas (Amistad, Schindler’s List, Munich) with not a whole lot in the middle ground. Catch Me If You Can showcases every side of Spielberg: his flair for drama, his love of child-like wonder, his heart for adventure, and his ability to create a film with the widest possible appeal. The more I think about it, the more I look forward to re-watching this flick. 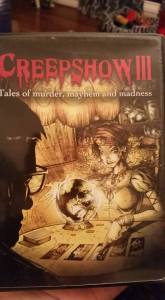 I know what you are thinking: “there was a Creepshow III?” As a matter of fact, there was! And no one in the entire universe gave half a damn, because it is absolute garbage. The movie released nearly 20 years after Creepshow 2 to absolutely no acclaim, and currently holds an abysmal score of 2.9 on IMDb, along with Rotten Tomatoes ratings of 0% from critics and 11% from audiences. The only things I know about it are that it exists and that it is nearly unwatchable, so I’ll be giving it a go soon enough. 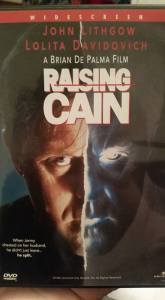 Brian De Palma has had a career filled with ups and downs. 1992’s Raising Cain released immediately following what was arguably his lowest low: 1990’s The Bonfire of the Vanities. It also immediately preceded a bit of a De Palma revival with Carlito’s Way and Mission Impossible, along with a personal favorite of mine, 1998’s Snake Eyes. I don’t know anything about this particular flick, but I’m interested to see where it falls on the wide spectrum of Brian De Palma’s career. From another angle, I’m interested to see how John Lithgow is in this movie. Audiences today can certainly buy him as a menacing presence since his acclaimed role on the television series Dexter, but 1992 was a very long time ago for Lithgow’s career. People might have recognized him from The Twilight Zone movie, or Harry and The Hendersons, or perhaps from Footloose. At this point, he hadn’t even become recognizable for his role on 3rd Rock From The Sun. Given his next role after this was as a villain in a Sylvester Stallone action flick (Cliffhanger), I’m pretty sure this didn’t break any boundaries for him. I’m sure it’ll be an interesting watch for his performance all the same, because he is not a man who is known for phoning it in.  I mean, just watch the trailer for this movie. Somehow, I think Lithgow will keep things entertaining. 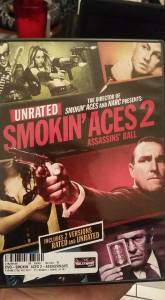 Smokin’ Aces is, if you ask me, a damn fun crime movie. It isn’t a masterpiece by any means, but I’ve never not had a good time watching through it. Smokin Aces 2, on the other hand, is a very different story. I remember watching this on VOD when it first came out, and I’ve never gone back to it since. Honestly, I only remember brief flashes of it, and the feeling of unsurprising disappointment when all was said and done. Looking back at the cast list now, however, I’m curious to give it a re-watch. Ernie Hudson? Tom Berenger? Michael Parks? I recalled Vinnie Jones, but not the rest of these folks. Maybe there will be more to redeem it on this go-around? 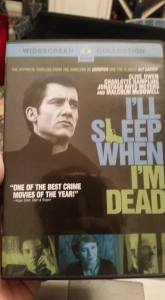 The combination of director Mike Hodges and leading man Clive Owen worked wonders in the cult classic, Croupier. A few years later, the tandem tried to re-bottle the lightning with I’ll Sleep When I’m Dead, with a supporting cast that included Jonathan Rhys Meyers and Malcolm McDowell. Despite a few positive heralds, it generally didn’t fly with critics or audiences at the time, due primarily to its perceived dullness and a convoluted ending. I remember seeing this go in and out of my Netflix queue a few times over the years, but I never had a chance to sit down to watch it. I generally like Clive Owen’s work, particularly in crime dramas, and I am also a big fan of Malcolm McDowell when he isn’t phoning in a role for a paycheck. I’m interested to see if this slow-burner is deserving of its negative reputation.