Tammy and the T-Rex

Today’s movie is a romantic tale involving reanimation, body-swapping, and a carnivorous dinosaur: Tammy and the T-Rex.

Tammy and the T-Rex was written and directed by Stewart Raffill, who was also behind such flicks as Mac And Me, Mannequin: On The Move, and The Philadelphia Experiment. His co-writer was producer Gary Brockette, who has no other writing credits, but eventually become a second unit director for a number of b-movies in the early 2000s.

The cinematographer on Tammy and the T-Rex was Roger Olkowski, who worked exclusively on low-budget productions over his career. His credits include shooting flicks like Sex Files: Pleasureville, Crystal Force, Stripshow, Deadly Ransom, and numerous other movies no one has ever heard of.

The editor for the film was Terry Kelley, who did significant cutting on television shows like Homeland, Rubicon, V.R. Troopers, and Mighty Morphin Power Rangers, and also worked on horror films like Jack Frost and Puppet Master vs. Demonic Toys. 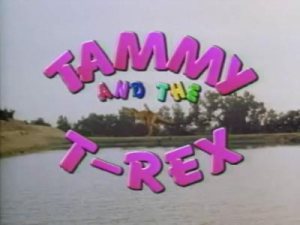 The cast of Tammy and the T-Rex is made up of Paul Walker (The Skulls, She’s All That, The Fast and The Furious), Denise Richards (Starship Troopers, The World Is Not Enough), Ellen Dubin (Napoleon Dynamite), Terry Kiser (Friday the 13th Part VII, Weekend at Bernie’s, Weekend at Bernie’s 2), Buck Flower (Maniac Cop, They Live, Pumpkinhead, They Live, The Fog), Sean Whalen (The People Under The Stairs, Idle Hands, Waterworld, Twister). 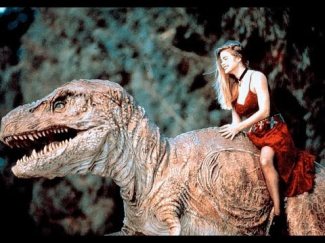 The plot of Tammy and the T-Rex is summarized on IMDb as follows:

An evil scientist implants the brain of Michael, a murdered high school student, into an Tyrannosaurus. He escapes, wreaks vengeance on his high school tormentors and is reunited with his sweetheart Tammy.

Apparently, there is alternate cut of Tammy and the T-Rex that was released in Italy, which features enough violence and gore that it would have received an R-rating from the MPAA. In total, this cut is less than 10 minutes longer, but has never been released in English. However, it is available on YouTube in Italian.

Tammy and the T-Rex is certainly not a beloved film, but the ludicrousness of its plot has made it a bit of a cult classic that has endured through the years. Currently, it holds an IMDb rating of 3.3, along with a 39% audience aggregate score on Rotten Tomatoes.

Tammy and the T-Rex is a movie that was obviously made without a clear audience in mind, which is almost always a recipe for disaster. The romantic story is goofy and seems to be aimed at teens, but the dinosaur-related violence doesn’t fit in with that tone in the slightest. From watching the unedited European cut, apparently the movie was initially intended to be even more violent, which is immensely confusing. A goofy teen romance doesn’t mesh well with killing sprees by a lead character, much less brutal decapitations.

At the same time, the bizarre tone, the inexplicable violence, the laughable effects work (the T-Rex arms, particularly), the ridiculous characters, and the massive plot holes combine to make a truly unique movie experience that defies any kind of conventional classification. This is a rare sort of thoroughly baffling film that is impossible to forget, and is an absolute must-watch for bad movie fans.

For more thoughts on Tammy and the T-Rex, I recommend checking out the episode of Red Letter Media’s Best of the Worst that spotlighted it alongside Carnosaur and Theodore Rex, as well as the feature on JoBlo.com’s Awfully Good Movies.