BlockBusted: The Fall of the Video Store

On episode 2 of the (Plot)opsy Podcast, I decided to talk about something a little different. Instead of a movie, I decided to take a look at the aftermath of the collapse of BlockBuster Video, and the current state of the physical media market for movies. There is more to movie shops than just movies, after all: there is the movie shop culture to be considered.

You can check out episode 1 of the (Plot)opsy Podcast, on “Guardians of the Galaxy” and James Gunn, here.

Ah, The Exchange. This is yet another one of my local Huntsville, AL haunts for digging up used DVDs, and boy is it a doozy. 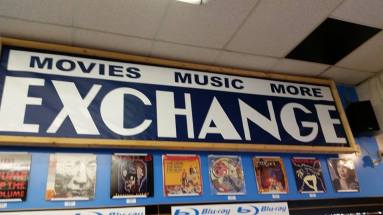 The Exchange isn’t nearly as pretty, as friendly, or as cheap as MovieStop, but it does have a peculiar charm to it. I have found some truly off the wall movies here, including most of Hulk Hogan’s filmography (including that one time he played Zeus).  It also has an unparalleled ambiance, wedged between a dollar store and a sex shop in a run down Wal-Mart parking lot. This is the place you picture when you think of bargain DVD spots, and it lives up to its appearance. 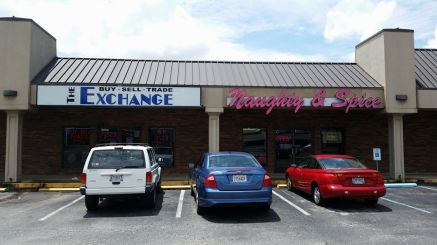 As opposed to MovieStop, The Exchange does not deal exclusively in movies. However, they only carry used DVDs, so almost their entire stock is bargain bin in price and quality (in this context, that’s a good thing). 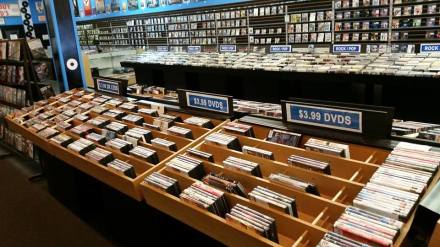 The Exchange doesn’t quite have the dirt prices of MovieStop either (at least in the bargain bins), but it is a rarity to find anything priced over 10 dollars in the entire selection of DVDs available.

In general, I choose MovieStop over The Exchange when I go hunting for movies. However, The Exchange is no pushover in regards to pricing and the obscurity of their collection, and I do find myself dropping by there pretty often because of it.

If you happen to be in Huntsville and are looking for something horrible to watch, this is a place to look. They also have some really dreadful posters on the wall from notoriously flopped movies such as “It’s Pat!” and “Red Tails” that are for sale, in case you are into that kind of thing. I can’t image who would be though.

MovieStop has got to be my favorite location for digging up DVDs. It doesn’t have the local charm of a lot of places, but they make up with it with their massive stock. I’m never quite sure what I’ve going to find in a MovieStop, but I always know that I am going to dig up something excellent / obscure (and that I’m not going to injure my wallet in the process).

As you might gather, MovieStop is essentially a GameStop for movies. It was, in fact,  previously run under the same company, but has since branched out into independent operations. And personally, I’d say the service you find at MovieStops is far and away better than what you would find at your average GameStop. 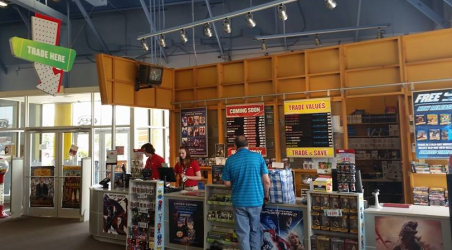 Based out of Atlanta, the company has already done a lot of expanding in the Southeast. I have actually been to just about every MovieStop in the region through my travels, and they have been pretty consistently impressive. Currently, they are still only operating out of 10 states, but I have seen (and heard) every indication that further expansion is just around the corner. 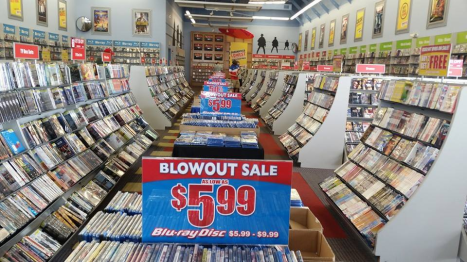 Ever since I have been going to my local MovieStop in Huntsville, AL, they have been running a bargain bin sale: movies on the rack are 2.99, and ‘buy one get one free’. Rarely can one find a better deal than that. I have picked up a ton of features for this blog through that sale alone, and have quite the impressive backlog because of it.  (Also, MovieStops consistently have used BibleMan DVDs in stock. Except for the Huntsville, AL one, because I bought them all)

Last but not least, MovieStop stores are almost always pretty. Most DVD spots are usually run down and dingy, sometimes even located next to sex shops… 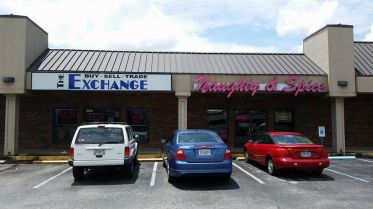 …or tagged as a juggalo hangouts.

So, MovieStops kind of nicely break up the typical pattern.  They even go above and beyond on some of the design and frills in the stores:

So, if you are ever traveling through (or live in) an area with a MovieStop, I highly recommend checking them out. They are not all equal in quality (the Tuscaloosa, AL one is particularly disappointing), but in general they are great places to find movies: obscure foreign films, classic B-movies, indies from the 90s, current Blu-ray releases, and just about anything else you might be looking for.