Yor: The Hunter From The Future 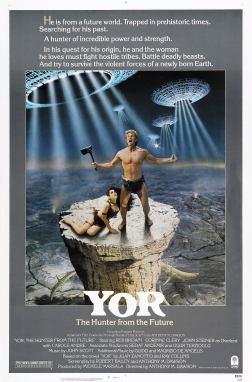 Today’s feature is a true cult classic sci-fi / fantasy b-movie: Yor: The Hunter From The Future.

The story behind Yor is a loose adaptation of a comic called Henga, El Cazador, which was originally created by the duo of Ray Collins and Juan Zanotto.

Yor was co-written and directed by Antonio Margheriti, a prolific creator of knockoff b-movies such as Cannibal Apocalypse, Horror Castle, Flesh For Frankenstein, Alien From The Deep, and Killer Fish. His co-writer on the screenplay was Robert Bailey, an experienced visual effects artist who has worked on films like Evilspeak, Blade Runner, and C.H.U.D. II: Bud the Chud.

The cinematographer for Yor was Marcello Masciocchi, who also shot the films Boot Hill, All the Way Boys, Ace High, and Jungle Holocaust.

The special effects on Yor were provided by the low-budget team of director Antonio Margheriti, his daughter Antonella Margheriti, and his son Edoardo Margheriti (who would later serve as an assistant director on Hudson Hawk).

The makeup effects for Yor were provided by Mario Scutti, who is best known for working on David Lynch’s failed science fiction epic, Dune. 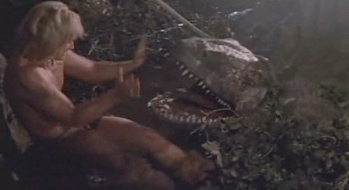 The memorable music for Yor was provided by John Scott, who also composed music for films like Trog, Man on Fire, and King Kong Lives over his career. 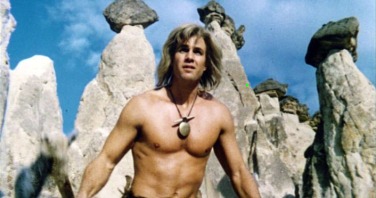 The plot of Yor combines elements of science fiction and fantasy, particularly in regards to the setting. In the beginning of the film, it is assumed that Yor takes place in the distant past, but it is later revealed through Yor’s journeys that the world he lives in are ruins from a technologically advanced civilization. Unfortunately, the full title of the movie (Yor, The Hunter From The Future) completely spoils this twist out of the gate.

Yor wound up with three Golden Raspberry nominations: Reb Brown for Worst New Star, the theme song “Yor’s World” for Worst Song, and the score as a whole for Worst Musical Score. Despite not winning in any of those categories, Yor is listed in The Official Razzie Movie Guide as one of “The 100 Most Enjoyably Bad Movies Ever Made.”

Yor was not particularly well-received, but has held up through the years as a cult favorite bad movie. It currently hold a 4.1 rating on IMDb, along with Rotten Tomatoes scores of 17% (critics) and 50% (audiences).

Everything about Yor both feels and looks cheap, which gives the production a certain charm, not unlike many Corman flicks or similar Italian b-movies. While Reb Brown is always a hammy delight, he isn’t quite in Space Mutiny or Strike Commando form in Yor. In general, he is a cut and dry barbarian here, which is a slight disappointment. The biggest draw here are the goofy effects, which are hilariously incompetent. As mentioned earlier, the director elected to do the effects himself (with the help of his children) rather than hire a crew or bring in outside help, which reminds me of an old lawyer’s saying: “A man who is his own lawyer has a fool for a client.” If you ask me, the same logic held true here for the effects work.

There are certainly some vivid highlights from this movie, but on the whole it is about as slow and dull as the Ator movies if you ask me, though the peaks arguably justify the tribulations of the valleys. 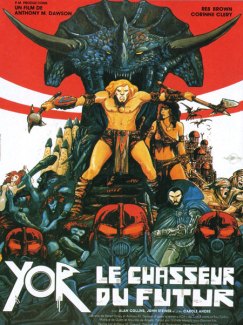 Yor is a movie that has proven pretty contentious among bad movie fans. Some absolutely adore it, while plenty of others find it too boring to enjoy on the whole. Personally, I recommend at least giving it a shot, with the caveat that it is far from a good-bad slam dunk. If you go in with managed expectations, you’ll have a better time with it. At the very least, whether you want to watch the film or not, you absolutely must listen to the bizarre prog-rock theme song.