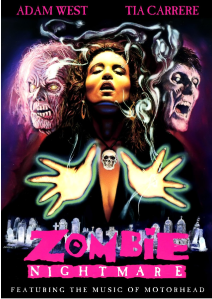 “Zombie Nightmare” is a very boring movie. Outside of the near-indistinguishable “Prince of Space” and “Invasion of the Neptune Men”, I haven’t had to rewatch any IMDb Bottom 100 movies as many times as this snoozer. I don’t know what it is about this movie, but the details of it vanish from my memory as soon as I watch it.

After the first time I watched “Zombie Nightmare”, the only memories I retained were disturbing images of Adam West in a creepy mustache, and the sound of a poorly dubbed voice that sounded vaguely like The Penguin.  I tried reviewing it based on those recollections alone, but that wasn’t going to do.

When I watched the movie for the second time, a few more things stuck with me: really bad 80s fashion everywhere, the zombie’s revenge plot against the unrealistically shitty hit-and-run high schoolers, the origin story of the zombie (and his father’s death in the opening sequence), and one of the slowest chase sequences of all time through what looks to be a YMCA. I half-expected the Toxic Avenger to show up at some point during the pursuit. Anyway, I was pleased to retain details that time around!

Then, before I wrote this review, I went on a brief hiatus from the blog. And, of course, I forgot most of those details again. Thus, I watched the damned movie again. This time, things stuck out differently. All of the previously mentioned details were rattled out of my memory, but I caught a few more that didn’t stick with me previously: I’m crediting this to the fact that I had myself glued to my computer for this viewing. Believe me, there is little I want to do less than watch this movie for a fourth time. Anyway, this time I particularly noticed the horrendous overacting  by the voodoo priestess who resurrects the zombie, and caught a lot more details about the subplot of police corruption in the film. The movie almost takes a “Touch of Evil” turn to focus more on the shady police practices by Adam West and the other senior officers than the giant zombie wandering around the town tearing people apart.

Oh yeah, and the zombie drags Adam West to Hell via an open grave. That was actually pretty awesome.

So, do I recommend “Zombie Nightmare”? Honestly, despite the fact it is incredibly boring, it isn’t nearly as bad as a lot of the flicks on the list. In this case, that is kind of a weakness? It isn’t consistently bad enough to be a whole lot of fun. It is certainly incompetently thrown together, but not in a charming or entertaining way. I enjoyed little pieces of it, so I can maybe recommend the MST3K highlights. I certainly can’t recommend sitting through the whole thing, unless you just want background noise of low-quality rock songs. Speaking of which, for a movie that sells itself on the soundtrack, the audio quality is really bad. Seems like a bit of a squandered opportunity, but what isn’t in this movie?

Honestly, I felt like this was a stone’s throw from being a “Maniac Cop” movie. Speaking of which: just watch “Maniac Cop”. You get police corruption, a giant revenge-seeking zombie, better deaths, better writing, and Bruce Campbell. And, if you stick it out to “Maniac Cop 3”, you will even get an overacting voodoo priest. If for no other reason, watch it for Robert Z’Dar’s chin.