“Eegah” is, in my opinion, the epitome of the early 60s B-movie. There is a simple monster, unnecessary musical numbers, horrible voice-over, and nothing that approaches any sort of artistic depth. All of that said, I really don’t hate this movie. Despite all of its flaws, it is a not a difficult movie to sit through. It isn’t always particularly interesting (the scene where Eegah shaves isn’t exactly riveting), but I don’t recall ever being bored while watching it, which I can’t say about a lot of IMDb Bottom 100 movies. 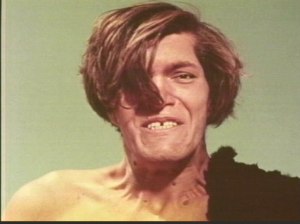 Richard Kiel, best known as Jaws from the James Bond movies, does an adequate job of portraying the eponymous giant. Arch Hall Jr., who plays the  swooning, dune-buggying “hero”, isn’t nearly so passable. I can’t even begin to describe how horrible his voice is in this movie, particularly in conjunction with his bizarre hair and perplexing face. The fact that his singing is so often spotlighted in the movie almost makes one long for his standard acting. Here are a couple of his numbers from the film:

As much as I dislike Arch Hall Jr. in this movie, those musical numbers are some of the most memorable segments of the movie, and his performance goes a long way towards distinguishing this movie from the pack of B-pictures from the time. That isn’t exactly a good thing in this case, but it could realistically be said that this movie would have been forgotten in time without his ludicrous performance.

I feel like it is worth mentioning again: I don’t hate this movie. I think “Eegah” is half decent for what it is: a cheaply made monster movie. Nothing about the movie is good, but outside of the acting, I think the weaknesses boil down mostly to the lack of funding available. Sure, the writing and directing aren’t stellar by any means, but they got the job done. There are some definite jarring moments of sound editing, but overall, nothing ruins the movie so much as to make it unwatchable. Arch Hall Jr. is the only huge problem I have with the movie, and he does at least serve to make the film memorable, so I can sort of forgive that.

As far as a recommendation goes, I can certainly say that the MST3k riff is worth digging up for any fans of the show. It is one of my personal favorites of the Joel years for sure. Otherwise, this sits right on the edge of being a good-bad movie. There are some good laughs to be had, but I don’t think it is quite as consistently over the top as “The Girl in Gold Boots”, if you happen to be looking for a fun music-infused B-flick. It isn’t excessively dull, which is ultimately its greatest strength, but there also aren’t a lot of gold moments to get laughs out of, making it not ideal for a bad movie night. I’d give it a generally loose recommendation, but I will also say that I will almost certainly be giving it another watch myself at some point down the line.