The Beast of Yucca Flats 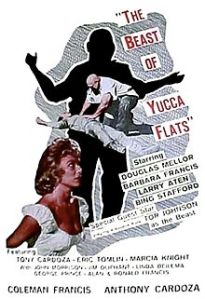 What happens when you put “Red Zone Cuba” and “Plan 9 From Outer Space” into the blast zone of an atomic bomb? Ideally, both movies would be destroyed. Alternatively, they could synthesize into a mindless creature of a movie called “The Beast of Yucca Flats”. 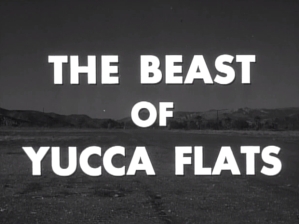 Starring the hulking Tor Johnson of “Plan 9 From Outer Space” infamy, and directed/written by “Red Zone Cuba” visionary Coleman Francis, “The Beast of Yucca Flats” is exactly the quality of movie you should expect: it is absolute garbage. The only saving grace of “Yucca Flats” is the curious charm that is occasionally the side effect of absolute incompetence.

First off, eponymous “Beast” (Tor Johnson) cannot act. He spent most of his career in the background of movies as a muscle-man, but he never really had the chops for acting. Luckily (or unluckily, depending on how you look at it) for him, in “The Beast of Yucca Flats”, he doesn’t really have to act. Due to some of the most baffling sound work in cinema history, all of the dialogue in the film is spoken from off-screen. This means that Tor’s lead role is more or less relegated to a silent beast (I don’t recall if he even got a line before his transformation). This mechanical issue also leads to some awkward off-screen conversations set against still images, and numerous disembodied voices with unclear sources moving the plot along. Clearly in an attempt to cover this horrific sound work, the movie also has narration throughout. Unfortunately, the narrator rarely speaks in complete sentences, and never quite makes any sense. Ultimately, all of the film’s problems mentioned here (and many more) boil down to the same fellow at the rotten core of this attempted film: Coleman Francis.

Yet, despite the countless issues with the film (or maybe because of them), “The Beast of Yucca Flats” is almost certainly the most entertaining and best remembered of the Coleman Francis movies. As mentioned before, there is a certain intangible charm that certain movies have that can only come from the honest incompetence of the filmmaker, and “The Beast of Yucca Flats” has it. The movie is rightfully considered to be one of the classic considerations for “worst film of all time”, right alongside “Manos: The Hands of Fate” and “Plan 9 From Outer Space”. The Mystery Science Theater 3000 episode on the movie is also considered to be one of their finest:

It is mind-boggling to compare “Beast of Yucca Flats” to Coleman Francis’s other IMDb Bottom 100 movie, “Red Zone Cuba”. Both movies are arguably of equal incompetence, but “Yucca Flats” is far and away more entertaining to watch. Watching them back-to-back illustrates the hazy boundary between an entertaining bad movie and an unwatchably bad movie, at least in my opinion. In any case, I can recommend checking out the MST3K of “The Beast of Yucca Flats”. but I certainly wouldn’t say the same about “Red Zone Cuba”.

However, “Yucca Flats” doesn’t have nearly as catchy of a theme song:

“The Beast of Yucca Flats” isn’t going to be as much fun for a casual group today as “The Room” or “Birdemic”, but it rightfully has a place among the classic bad movies of yesteryear. If you can enjoy “Plan 9”, “Manos”, and other bad flicks from back in the day, then you don’t want to overlook “Yucca Flats”.

4 thoughts on “IMDb Bottom 100: The Beast of Yucca Flats”