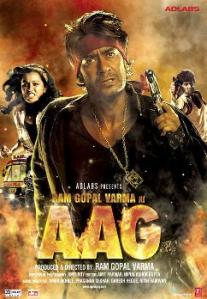 “Ram Gopal Varma’s Indian Flames” (also known as “Aag”) was the first Bollywood movie to make it into the IMDb Bottom 100, and helped start the growing international trend of the list. As you should expect, it isn’t a good movie. However, as is sometimes the case, there is more to the negative reputation of “Aag” than the poor quality of the movie on the screen.

“Aag” was initially planned as an official remake of the beloved Bollywood classic “Sholay” by Ramesh Sippy.  It was even titled “Ram Gopal Varma Ki Sholay” during development, until it was ruled to be in violation of Sippy’s copyright and trademark on the film (the character names were ordered to be changed as well). To make things worse in the court of public opinion, numerous members of the cast and crew of “Sholay” spoke openly against “Aag”, meaning no one was particularly excited about the movie even before it hit theaters. The best parallel I can think of is whenever someone has done a remake of Hitchcock: audiences and critics are not usually receptive to the idea of readdressing films regarded as timeless.

Unsurprisingly, the movie was a massive critical and box office failure. After all of the production shenanigans, I honestly think it may have failed regardless of the quality of the movie. But, as it so happens, “Aag” is no masterpiece.

To start with, the movie is far too long for what it is, and is not structured in such a way that the length is justified. The run-time is 164 minutes, but the structured made it feel even more inflated from there. There were numerous points throughout the second and third acts where I thought the movie was coming to a conclusion, only to have the conflict fizzle out and the pieces on the board reset. To say that this was frustrating doesn’t cover it in the least,  mostly because of the entirely uninteresting characters the audience is subjected to throughout.

While “Aag” has a fantastic villain character (Babban) played by Amitabh Bachchan, the rest of the cast is a stone’s throw from abysmal. Whenever Babban isn’t on-screen, the movie screeches to a halt underneath the shittiness of the acting and writing. The leading duo, who should carry the film, are two of the least interesting characters in the story. One of them primarily fills the role of comic relief (poorly) until the last act, whereas the other does less emoting than Keanu Reeves. There are love interests shoe-horned for both characters, most notably Gungroo, who might be the worst-played and worst-written character in the movie. She spends most of the movie either threatening violence on people or being harassed by one of the leads (named “Heero”, groaningly). She ultimately magically falls in love with “Heero” after a jarring musical number and a handful of shenanigans, because of course she would. There is one other decent character outside of Babban (Inspector Narsimha), but he is more passable than he is good, and he never owns a scene in the way Babban does.

You can tell that there is the skeleton of a decent movie buried underneath the layers of dull sediment of this film, but that just makes the experience all the more disappointing. It feels like someone took the story beats and concepts from a classic story, and then locked a bunch of unpaid interns in a room and demanded that they recreate the movie before they could get fed. Rushed, amateurish, and without any regard for an audience: that pretty much nails the writing issues with “Aag”.

I do not recommend watching “Aag”. There isn’t a lot of entertainment to squeeze out of this, and you could do far better things with the time you would spend watching this movie. The performance of Amitabh Bachchan as Babban is pretty delightfully over the top, but not good enough to redeem the movie as a whole. I haven’t seen “Sholay”, but I am willing to wager that it is a much better time than “Aag”.