Oasis of the Zombies / Treasure of the Living Dead

“Oasis of the Zombies” is  genuine Z-grade dreck, something I didn’t expect to see much of in the IMDb Bottom 100, mostly due to the relative obscurity of most of these movies.  That said, it is unarguably of low enough quality to qualify for any elite ranking of horrible films.

As is the case with many Z-movies, there are a whole lot of alternate titles for this one. The official IMDb entry is as “Treasure of the Living Dead”, I assume because that is a better translation of the actual title. However, I am most familiar with it as “Oasis of the Zombies”, which is also how the film is currently listed on Netflix. So, those are the two I am going to go with here. 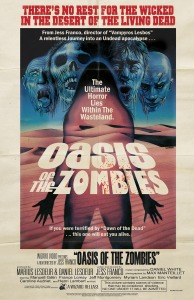 I was pretty shocked to find that this movie was made in the 1980s, because the quality is such that I though it was made much earlier than that. It might be possible that this was done on purpose as an homage, but I am not inclined to give this flick the benefit of the doubt on any artistic intentions.

The cinematography in “Oasis of the Zombies” is down-right  laughable. It is rarely clear what the characters are doing, or what is actually happening on screen. Most of the shots are either so distant that nothing is clear, or so close up that you can see nothing other than a zombie’s face. It is incredibly tiring to say the least. Worse yet, and I can’t believe that this is a necessary complaint for a motion picture, but there is not enough motion in this picture. So little happens on screen that there is nothing to keep your attention on the film. I honestly could have been distracted away from watching this movie by the faint sound of wind in the distance. Speaking of sound, the only thing worse than the cinematography in this film is the miserable sound work,  for both the music and the dialogue. The soundtrack is hypnotically repetitive (in a bad way), and the dialogue is near inaudible throughout the movie. That said, that is just what Z-movies are like when it comes down to it. From what I can tell, all of these complaints are fairly typical from this kind of production.

On to a brief positive about the film: the plot isn’t so bad when you can follow it. The idea of cursed Nazi zombies is pretty solid, and when you throw in a gold hunt into the mix, things get even more interesting thematically. The more I watched the movie, the more I was reminded of the infinitely more entertaining movie  “Dead Snow”, which deals with a similar setup with frigid mountains substituting in for the desert setting of “Oasis”.

“Oasis” has a handful of ok zombie effects, but the low budget of the production really shows itself as the same shots of zombies are reused over and over again. Each time I saw the same zombie makeup, the shot looked less and less convincing to me, until it all just started to look goofy. As is the principle with most monster movies: less is definitely more.

All in all, “Oasis of the Zombies” is really difficult to sit through, mostly due to the fact that there is no sense of progression. There isn’t anything to redeem the film entertainment-wise, so I don’t have any reason to recommend it.

One question about this movie really has me curious: why is this movie known? I recognized the title “Oasis of the Zombies” but I have no idea why. It takes a not-insignificant quota of votes for a movie to qualify for the IMDb Bottom 100, so that weeds out most of the Z-grade films out there. As far as I know, this was not an MST3k feature, which is how most movies like this get the awareness and votes to break into the ranking. When it comes down to it,  I feel like it is one among many Z-movies, standing out from the pack for no particular reason that I can put my finger on.