Today, as part of the “15 Days of Bad Christmas Movies” pod crawl, I will be talking about the B-movie holiday classic and IMDb Bottom 100 stalwart, “Santa Claus Conquers the Martians”.

To begin with, the setting of “Santa Claus Conquers the Martians” is a bit peculiar. In this universe, Santa Claus is an established, real person: there is no particular mystery or mysticism associated with him. This is fairly bizarre for a Christmas movie, to say the least: most use the mystery surrounding him as part of the story. The movie even opens with Santa being casually interviewed on TV at the north pole (where he, of course, has a physical workshop in the near-uninhabitable tundra). This sequence also features the first appearance of the character Mrs. Claus on the big screen, as “SCCTM” predated “Rudolph, the Red Nosed Reindeer” to the theaters by 3 weeks in 1964. Santa also strangely forgets the names of his reindeer during this scene, famously referring to “Blitzen” as “Nixon”. Keep in mind, at this point in time Nixon was only know as the former Vice President of the United States, and as the man who lost the Presidency to a Catholic.

Part of the charm of “SCCTM” comes from a horde of cheap effects used throughout the film: these include the kind-of animated introductory credits, a man in a polar bear suit that makes the bear fight in Lou Ferrigno’s “Hercules” look dignified, a cardboard killer robot named Torg (not to be confused with Torgo from “Manos: The Hands of Fate”), space ships of Ed Wood levels of quality, and martian costumes consisting of what appear to be spare television and vacuum cleaner parts. Last but not least, the Martians carry magic guns (capable of freezing or tickling targets) that are just recolored “Wham-O” air blasters. Personally, I can’t hold the fact that the production was frugal with effects too harshly against them, but the end result of all of these cost-saving decisions is pretty entertaining to see on screen. 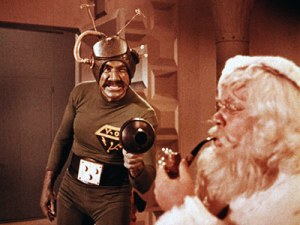 A lot of fanfare has been made regarding the inaccuracy of the title of this movie. Santa does not do any fighting in the movie, and doesn’t claim Mars for the glory of the North Pole. The more accurate title is “Santa Claus and the Martian Civil War”: the conflict of the story comes from a split in martian society over whether the joy of Christmas should be assimilated into their lifestyle. The martian elder Chochem warns that the children of Mars will become rebellious if they are not exposed to yule-tide cheer, a controversial declaration which sparks the initial martian expedition to retrieve Santa in the first place, and plants the seeds of the eventual martian rebellion by Voldar. so if anything Santa is a catalyst to conflict, not a space conquistador.

Despite not featuring any real conquering, there is a climactic fight scene in the movie, in which toys are used by Santa Claus and the martian children to annoy and distract Voldar and the martian rebels until they are subdued by Kimar and his loyalist soldiers. It is a frenetically shot scene that needs to be seen to be believed, and is perhaps the most infamous sequence in the film.

The leader of the martian rebels, Voldar, is one of the most purely evil characters in the history of film. He not only convinces the martians to kidnap and interrogate a pair of human children, but he also attempts to murder Santa Claus and two kidnapped children on multiple occasions, including an incident in which he attempts to launch them into the void of space via an airlock. He is also established to be particularly bellicose and fond of war, at one point commenting on Mars’s past as a military society. Mars, of course, is the romanticized name for Greek god Ares, who is the god of war in both mythologies. He also has a legendarily villainous mustache, just in case it wasn’t clear to the audience that he would be the mutinous villain of the story.

It is worth noting that the Martian naming conventions in the script and by and large astoundingly lazy: four of the primary martian characters are named Kimar, Momar, Bomar, Girmar. standing for “King Martian”, “Mom Martian”, “Boy Martian”, and “Girl Martian”, respectively.

One of the most memorable parts of “SCCTM” is undeniably the theme song, Hooray for Santa (or Santy) Claus: it is absurdly catchy, and features some mean trumpet work to boot. I specifically recall finding the sheet music to this is my high school band’s archives, and despite my pleadings, we ultimately never performed it publicly. The song is arguably the best thing to come about as a result of this film, though you probably won’t hear it on a Christmas radio station.

Infamous actress Pia Zadora appears in this film as Girmar in her first on-screen role (she was 8 years old at the time). She is best known as a punching bag for movie critics in the 1980s, particularly for her Razzie nominated roles in “Butterfly” and “The Lonely Lady”. Bafflingly, she also received a Golden Globe for her performance in “Butterfly”, a decision that is mocked and criticized to this day

At the end of the movie, it is decided that one of the martians (Dropo, who provides much of the film’s comic relief) will take on all the duties of Santa Claus for Mars. It is never made clear as to why this wasn’t tried in the first place: the martians have a concept of what Santa does, and it is established that they have earth television programs that feature him prominently. Why wouldn’t they try to replicate Santa’s work first, instead of going through the trouble of apprehending Santa? Who knows?

The cult status of SCCTM is iconic among “so bad it is good movies” and Christmas movies alike. it particularly took off in popularity after it was featured in the show MST3K in the 1990s.  The movie has since seen multiple adaptations to the stage, is often cited as one of the worst movies of all time in professional publications, has become a staple in the IMDb Bottom 100 ranking, inspired a spin-off novelization, and was even re-dubbed in Brazil as a drug comedy called “Santa and the Magic Powder”. It was re-riffed live by the Mike Nelson MST3K crew as part of a Rifftrax Live event in December of 2013, which was simulcast in theaters around the United States and Canada.

As to the Plotopsy of SCCTM, what went wrong with this production? As I previously mentioned, the defining aspect of the movie is frugality, bordering on frank cheapness. That said, there is an honest charm to this film that has turned it into the cult classic that it is, much of which is rooted in those same financial limitations of the production. So, when it comes down to it, the movie’s weakness is its strength, and it wouldn’t be what it is without it. The cheesy writing is also often criticized, but to a certain degree, that was unavoidable: after all, this was intended as a simple children’s film, so cheesy elements were going to seep in regardless.  Director Nicholas Webster did have success directing television, so he certainly wasn’t incompetent behind a camera (though the failure of SCCTM pretty much killed his chances with features). There are even some shockingly half-decent shots to be found in SCCTM, so unlike many bad movies, it isn’t so much a failure on a technical level.

I can’t recommend this one highly enough, especially with the MST3k riffs. It is horrible and absolutely deserving of a place in the IMDb Bottom 100, but it is also an absolute blast. Definitely check it out if you haven’t already, it is readily available on YouTube.

You can catch up with the 15 Days of Bad Christmas Movies over with the Stinker Madness Podcast who just covered “Home Alone 3”, the If We Made It Podcast who just did “Ernest Saves Christmas”, the JT Movie Podcast, who took aim at “Jack Frost” this week (notably the creepy snowman one, not the Michael Keaton one), and Dark Corners of This Sick World on YouTube, who are featuring one of my personal holiday bad movie favorites this coming Monday, “Elves”: because nothing says Merry Christmas like a Nazi incest plot.

Make sure to tune in next week for my next entry in the 15 Days of Bad Christmas Movies, which will feature the Hulk Hogan vehicle and fellow IMDB bottom 100 member, “Santa with Muscles”