Movie:
The Disappearance of Alice Creed 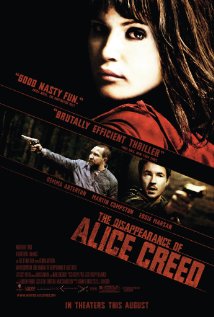 Pitch:
“That ‘Disappearance of Alice Creed’ is pretty great. A fantastic example of fine screenwriting. There are really only those three characters in the whole thing, so it is the kind of thing you could imagine seeing on the stage. There are a couple of twists and turns in there: it is definitely worth checking out.”

“The Disappearance of Alice Creed” was written and directed by J Blakeson, a man with very few other credits. According to IMDb, “Alice Creed” got him nominations for “Most Promising Newcomer” at the Evening Standard British Film Awards and “Breakthrough British Film Director” at the London Critics Circle Film Awards, and landed him on a list of 10 directors to watch in 2010 in Variety magazine. However, his follow-up to “Alice Creed” (a Columbia Pictures film called “Fifth Wave” about an alien invasion) has only just begun filming, and isn’t expected to be released until 2016. Outside of a handful of short films, his only credits are as a writer on “The Descent: Part 2” and a TV movie called “Mist: The Tale of a Sheepdog Puppy.”

As Max mentioned, “Alice Creed” consists of a bare-bones cast of three. Martin Compston has appeared on a number of BBC dramas and British movie productions, including “Line of Duty,” “Silent Witness,” and “Filth.” Eddie Marsan is a veteran character actor with a list of over 100 acting credits, in everything from “The World’s End” to “Gangs of New York” to “21 Grams,” and also appeared alongside Compston in “Filth.” Last, but not least, is Gemma Arterton, who plays the eponymous Alice Creed. Her credits are more big budget Hollywood than the other two, despite not starting out until 2007. In 2008 she appeared in movies such as the Bond flick “Quantum of Solace” and Guy Ritchie’s “RockNRolla,” which led into 2009 which included “Alice Creed” and “Pirate Radio.” By 2010 she was starring in Hollywood flicks like “Clash of the Titans” and “Prince of Persia.” She most recently popped up in movies like 2014’s “The Voices” with Ryan Reynolds and 2013’s “Hansel & Gretel: Witch Hunters” in a lead role alongside Jeremy Renner.

As far as trivia goes, most of the interesting stuff that I could dig up relates to the arduous and accelerated filming process. Not only was it filmed in four weeks, but the casting wasn’t completed until two weeks before shooting. According to IMDb, there is no dialogue until almost the 6 minute mark of the movie, which almost certainly means that non-verbal acting is used extensively to build tension, along with creative cinematography, sound, and editing. The movie includes a number of nude sequences, for which Gemma Arterton declined the use of a body double, apparently so that she could “convey genuine fear.” In addition to that, a number of rumors and tales have come out of the production in relation to her professionalism and dedication to the role, including refusing to be unlocked from her character’s handcuffs while she was on set. 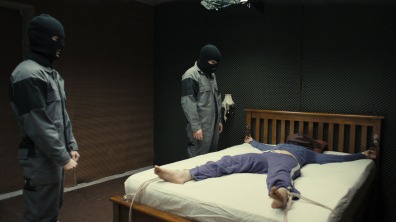 Critics generally enjoyed “The Disappearance of Alice Creed” more than casual audiences, as the movie scored 82% on the Rotten Tomatoes aggregator alongside an audience score of 67% and an IMDb rating of 6.8. Although the film was nominated for a handful of awards in Britain, it didn’t ultimately take any of them home.

As I expected based on Max’s pitch, this is a movie absolutely driven by the three actors in it. To say they knock it out of the park doesn’t even begin to touch it: they each create memorable, interesting, highly emotional and relate-able characters that are absolutely believable. Credit also has to go to the writing on that, of course, but the whole project would have just fallen apart without the right players in place.

Speaking of the writing, “Alice Creed” is very well crafted in that regard as well. The dialogue is great, but that pales in comparison to the hair-pin turns that are pulled off effortlessly throughout the plot. The twists are well laid-out, but still surprising until you start to think about them. Being able to lay the groundwork for believable plot twists is no easy task, and it is pulled off damn well here.

Apparently, the theatrical ending to the movie is not the one that was initially intended. Honestly, I didn’t notice, particularly in comparison to other movies that have altered endings at the last minute. It isn’t excessively cheery or anything, but it at least leaves a slight ray of sunshine at the end of a very dark drive.

There are some really good shots throughout the movie, and I particularly enjoyed the dialogue-less opening sequence where the premise slowly shapes together without a single word being spoken. The actors definitely pulled their weight there, but I thought that the shots and the editing were really telling the story throughout the sequence. DirectorJ Blakeson specifically mentions Ridley Scott’s opening to “Alien” as an influence on this sequence in his commentary on the film’s DVD, and I think you can really feel that desired atmosphere there. In any case, it was a great way to set up the tension for the rest of the movie, as well as a way to establish the primary setting.

Despite having a few highly uncomfortable moments, “The Disappearance of Alice Creed” is a high recommendation for me. The pace starts dragging a little bit in the second half, but it never slows down enough to totally lose your attention. You care about the characters, and want to know what happens to them, even when things begin to drag. Top notch performances are had by all on screen, and an outstanding amount of skill is showcased by J Blakeson as a rookie to feature films. I’m looking forward to what he does next year with “Fifth Wave.”