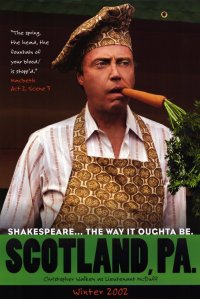 Pitch:
“It is ‘MacBeth’ retold as the story of a fast food restaurant. But it kind of works? Christopher Walken is pretty great in it as an investigator on the case. It seems like ‘MacBeth’ doesn’t get these odd adaptations as often as ‘Hamlet’ or ‘Romeo & Juliet’, but this is definitely an interesting one. Andy Dick plays one of the witches.”

“Scotland, PA” was written and directed by Billy Morrissette, an actor who has primarily appeared in bit roles throughout the late 80s and early 90s. As of the moment, “Scotland, PA” is Morrissette’s sole directing and writing credit, though he has apparently penned another movie set to release in 2015 (“My Dead Boyfriend”). Billy Morrissette is quoted as saying that he cooked up the concept for “Scotland, PA” while he was still in high school, making it a long time passion project for the actor.

At the time, “Scotland, PA” received mixed reviews from critics (59% on Rotten Tomatoes), but was nominated for the Grand Jury Prize at 2001’s Sundance Film Festival. Audiences regard it quite a bit higher than the critics, as it is sitting at a 74% audience score on Rotten Tomatoes and a 6.9 rating with the IMDb user base.

“Scotland, PA” stars a host of character actors, led by the always delightful Christopher Walken. Maura Tierney, the female lead, was then married to writer/director Billy Morrissette, and reportedly had significant input on the writing of her modernized Lady MacBeth surrogate character. Other notables in the cast include the much maligned comedian Andy Dick, the recently deceased James Rebhorn, frequent mob-movie character actor Kevin Corrigan, and James Le Gros, best known recently for his role as Wade Messer in the hit TV show “Justified.”

The crew, outside of Morrissette, includes most notably the now prolific cinematographer Wally Pfister, who has done extensive work with director Christopher Nolan in recent years (“The Dark Knight,” “The Dark Knight Rises,” “Insomnia,” “Batman Begins,” “The Prestige”).

Some of the more interesting and unique aspects of the movie include the eclectic soundtrack and score, which features a large number of songs from the band Bad Company. Apparently this decision was not only made to accentuate the 1970s aesthetics, but also because the band’s catalog was “surprisingly cheap.”

Despite the setting and updated dialogue, “Scotland, PA” is pretty faithful to the spirit and content of the original Shakespeare play it is based on. Surprisingly, the movie even retains most of the Scottish character names from the play with only minor updates, such as MacDuff (changed to McDuff), MacBeth (changed to McBeth), and Banquo (changed to Banko). In a tongue-in-cheek move, apparently the press kits for the movie were designed after Cliff Notes booklets of “MacBeth.”

“Scotland, PA” is quite the eccentric adaptation of the “Macbeth” story, to say the least. It isn’t incredibly crafted by any means, but the movie is without a doubt fun to sit through. The characters have interesting voices, and all interact well with each other. As mentioned previously, the 1970s aesthetic is pushed to the maximum, which gives the movie a campy feel to it. The fashion, references, and soundtrack all do a great job of building the atmosphere, and help keep the film comedic in spite of the tragic content.

Speaking of which, perhaps the most interesting aspect of this adaptation is the light-hearted and comedic aspects of it: most of the creative “MacBeth” adaptations out there don’t mess with the pure drama of the story, such as Kurosawa’s “Throne of Blood” and William Reilly’s “Men of Respect.” However, “Scotland, PA” is written and cast in such a way that what is essentially the same tragic story winds up being really funny, even if it is an incredibly dark way. Outside of the music, the dialogue and delivery is fantastic at keeping the tone lighter and ultimately out of the blood-drenched gutters of the story.

Going into the movie, I was curious if there would be any nods to Polanski’s “Macbeth” from 1971, given the 1970s setting of this unconventional adaptation. Sure enough, James Le Gros’s “McBeth” is clad in a wig that resembles Jon Finch’s lengthy, 70s-tastic hairstyle. It was a small detail to be sure, but one that I definitely appreciated.

I would be remiss to not mention Christopher Walken’s role in this movie. Unsurprisingly, he steals every scene he shows up in. I am a big fan of Walken’s style, and this is just the right kind of dark, quirky movie and role that he works spectacularly in these days. He still carries some of the gravitas from his days playing more serious roles, but also has genuinely fantastic comedic timing with his line delivery. That, in my opinion, means that he fits dark comedies brilliantly: he can participate in the comedic banter, and then turn the scene into a tense stare-down in a matter of seconds with the delivery of a single line. I was reminded of Walken’s famous scene with Dennis Hopper in “True Romance” more than once over the course of “Scotland, PA”, which I think illustrates this kind of interaction fantastically.

“Scotland, PA” is another movie that I can recommend to some very specific sets of people. I think most audiences might find the pacing too slow to be really fun, but fans of Shakespeare or indie comedies are almost certainly going to enjoy this movie. It definitely relies on knowledge of the source material, but in the case of a Shakespeare adaptation, that isn’t nearly as much of an issue as it is with other works. I can say that I personally enjoyed it quite a bit, although I think it could have been edited down a little bit more for the sake of pacing. In total, it clocks in at just over 1 hr 40 mins, so I think it could have lost a little bit of run-time. In any case, it is a plenty enjoyable film. If it sounds like it is up your alley, then definitely check it out.