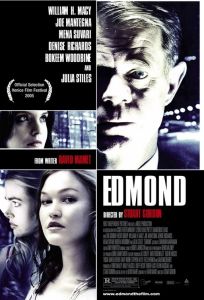 Welcome back to the Misan[trope]y Movie Blog! Next up in the two-week spotlight on Stuart Gordon is the 2005 film “Edmond,” a controversial David Mamet thriller starring William H. Macy.

“Edmond” features no significant writing contribution from Gordon, making it one of the few of his movies that he didn’t at least have a hand in writing. It was adapted by the acclaimed stage and screen writer David Mamet (“Glengarry Glen Ross,” “Wag The Dog,” “The Untouchables”) who wrote the original stage play in the 1980s. The violent tale of mental breakdown was written while he was going through a divorce, a fact that shouldn’t be surprising given how it portrays marriage.

As strange as the duo of Stuart Gordon and David Mamet may seem, they worked together previously on the play “Sexual Perversity in Chicago,” and came up together in the theater scene in Chicago. So, interestingly, there is precedent for the pairing.

The cinematography on “Edmond” was done by Denis Maloney, who would later rejoin Stuart Gordon for the 2007 movie “Stuck.” Despite the other issues with the film, I thought the cinematography here was generally fantastic, and one of the more memorable aspects of the film.

The fantastic musical score to “Edmond” was composed by Bobby Johnston, who also provided the music for “Wristcutters: A Love Story.” He worked with Stuart Gordon on a couple of other films, namely 2003’s “King of the Ants” and 2007’s “Stuck.” The jazzy, noir-esque score is almost certainly one of the most notable aspects of the film, and does a good job building up the atmosphere over the course of the story.

“Edmond” features production design from Alan E. Muraoka, who has worked on films like “Little Miss Sunshine,” “Ace Ventura: Pet Detective,” and “Loaded Weapon 1.” Set decoration was provided by Kris Fuller, who is currently attached to Kevin Smith’s upcoming “Yoga Hosers,” and has also worked on films as diverse as “The Cell” and the Blue Collar Comedy team’s “Delta Farce.” In spite of their primarily comedic backgrounds, the sets, locations, and visuals all look pretty fantastic and appropriate for the film.

The cast on “Edmond” features a score of recognizable faces: a mixture of both acclaimed actors and Stuart Gordon faithfuls. At the top of the stack is William H. Macy as the title character, Joe Mantegna, Denise Richards, Julia Stiles, Dule Hill, and Dylan Walsh. Among the Stuart Gordon gang who show up are Jeffrey Combs (“Re-Animator,” “From Beyond,” “Castle Freak,” “Fortress”), Debi Mazar (“Space Truckers”), George Wendt (“Space Truckers”), and Lionel Mark Smith (“King of the Ants,” “Stuck”), who also acted as a co-producer on the film.

“Edmond” is the story of a man having an abrupt and explosive mental breakdown. It is sparked off by an unplanned visit to a tarot reader, which then leads him to leave his wife, attempt to hire a prostitute, and ultimately commit a number of acts of violence by the end of the story. 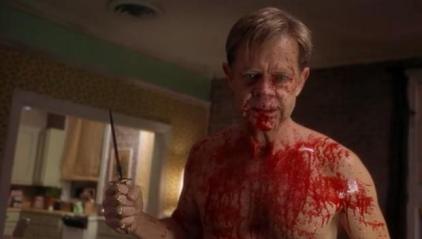 The film adaptation of “Edmond” took years to get off the ground, primarily due to issues of securing funding given the numerous controversial elements to the story. Alec Baldwin and Gary Oldman were both at one point rumored to be attached to the project as the title character. Amazingly, it took so long to see the screenplay come to life that David Mamet had to update the pricing on the prostitutes once the film was finally a go.

According to Stuart Gordon, the entire movie was completed over 16 days of filming. However, filming was only done after over a month of intense rehearsals with the actors to nail the details of their performances down.

The reception for “Edmond” was not exactly positive (outside of opinions of William H. Macy’s performance, which was received well). The film currently holds an IMDb rating of 6.3, and Rotten Tomato scores of 45% (audience) and 46% (critics). The budget of “Edmond” was rumored to be $10 million, of which it only made less than a quarter of a million back in its theatrical run, making it a significant financial failure.

“Edmond” is almost certainly the most out of left field work by Stuart Gordon, as it is nothing like anything else he has done on screen. It does try to have a slight humor in spite of the subject matter, something that Gordon is usually good at pulling off in horror, but it doesn’t really work here. Everything about the film just feels excessively weighted down, to the point that no attempts at humor are going to lighten the mood. 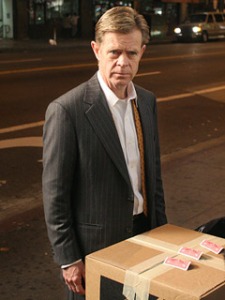 Criticisms of “Edmond” have run the gamut: many have taken issues with the explicit racism and homophobia in the story, while others have just claimed that the film is just too boring or needlessly weighted down with heavy dialogue.

Personally, I think that the racism and homophobia makes sense for the Edmond’s character, and I don’t think the story at all excuses his actions or opinions. However, the prison rape in the film struck me as unnecessary, and even cliched and lazy from a writing point of view. It almost felt like this was supposed to act as a perverse retribution for his actions, and provide the audience with some sort of satisfaction. Personally, I think that’s the kind of thing that is low for the lowest-brow of comedies, and certainly doesn’t fit in here. It also sorts out very unrealistically in the conclusion, with Macy’s character seemingly satisfied with his new life in prison.

A couple of review blurbs that I saw resonated with my initial feelings after first watching the film. Specifically, they compared “Edmond” to “Falling Down,” but without the energy and drive of that film. “Edmond” is really quite similar, given the character’s intolerance, anger, and ‘snapped’ state. However, “Falling Down” is perhaps a bit less sophisticated, but is also much more fun to watch given its quicker pace and tighter plot. 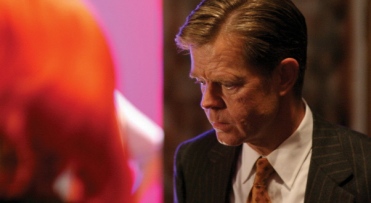 Something I did like about “Edmond” was the use of tarot cards, which was apparently a detail specific to the film. I think it was a pretty good addition, as the tarot cards are at once colorful, visual, and more symbolic than the original triggering mechanism, which was a palm reading.

As far as criticisms of the dialogue go, I think it is a bit excessive, but it is still Mamet dialogue, and sounds very organic despite its rigid scripting. There is just not enough happening in the story to make it really compelling, which is partially Mamet’s style and partially because the play was only one act to start with.

Overall, “Edmond” isn’t quite a good movie. If you are fan of David Mamet, this is probably up your alley, but I don’t think general audiences would ultimately get much out of it. Even less likely to enjoy this flick are Stuart Gordon fans: this just isn’t the Stuart Gordon product that people have come to expect, which isn’t necessarily a bad thing. I’m not going to fault him for trying something new by any means, but this film is definitely not catered for the same audience that he has historically served.

“Edmond” is not a good movie, a bad movie, or a good-bad movie. It exists in the limbo state of mediocrity in film, despite some fantastic performances. There unfortunately isn’t much for me to recommend here, unless you are a fan of David Mamet or William H. Macy, in which case you will get both of them on full display.