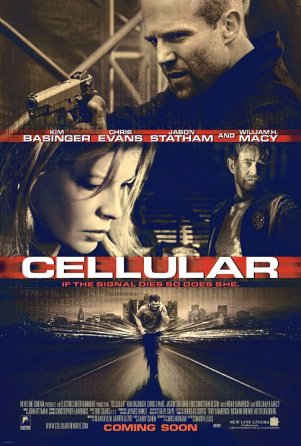 The next feature up in my spotlight on the career of Larry Cohen is 2004’s “Cellular,” starring Chris Evans and Jason Statham.

The story writing credit for “Cellular” went to Larry Cohen, while the screenplay credit went to Chris Morgan, who has gone on to write the vast majority of the sequels to “The Fast and The Furious.” Eric Bress (“The Butterfly Effect”) and J. Mackye Gruber (“Final Destination 2”) reportedly did uncredited rewrites of the script as well.

“Cellular” was directed by David R. Ellis, who has had a long career as an accomplished stunts guru, and is probably best known as a director for doing “Snakes on a Plane.”

The cinematography for “Cellular” was provided by Gary Capo, who has done work on such films as “Blood Diamond,” “McHale’s Navy,” “Final Destination 2,” and “The Thin Red Line.”

One of the key producers on “Cellular” was Dean Devlin (“Stargate,” “Independence Day”), who supposedly initially wanted to direct the movie, but instead decided to take a back seat creatively. He does appear in a small role in the film as a cab driver, however.

The music for “Cellular” was provided by John Ottman, who has provided scores for films like “Lake Placid,” “The Usual Suspects,” and “Kiss Kiss Bang Bang”.

“Cellular” was cut by Eric Sears, who has done editing work on such films as “Into The Storm” and “D2: The Mighty Ducks.”

The cast for “Cellular” is led by Chris Evans in his days before becoming an Avenger and a household name. Kim Basinger (“L.A. Confidential”), Jason Statham (“Revolver,” “The Transporter”), and William H. Macy (“Fargo,” “Edmond”) also have significant roles in the film, and the accessory cast features recognizable faces such as Noah Emmerich (“The Truman Show”) and Jessica Biel (“Hitchcock,” “The A-Team”). 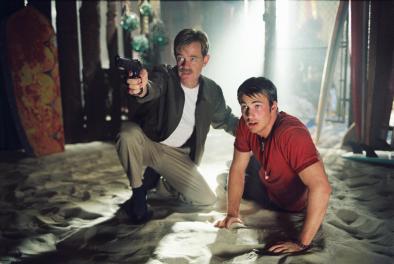 The plot of “Cellular” follows a young man who receives a mysterious call on his cell phone from a kidnapped woman who needs his help to save the lives of her and her family.

Chris Evans reportedly did his own car stunts for “Cellular,” training for weeks as a stunt driver to become proficient enough to handle the workload safely.

Larry Cohen worked on the concept for “Cellular” concurrently with “Phone Booth,” and sees them as fundamentally opposite concepts. Both lead characters are stuck on a phone throughout the story, but one is trapped in one place whereas the other can go anywhere. Understandably, the similarities have led the films to be compared to each other extensively.

The dirty cops plot in “Cellular” was reportedly inspired by the LAPD Rampart scandal, and certainly bears a lot of similarities to the real life corruption in that case (police executions, drug dealing).

“Cellular” was not received particularly well at the time, and currently has a score of 6.5 on IMDb along with Rotten Tomatoes ratings of 55% (critics) and 59% (audience). In spite of the negative reception, “Cellular” managed to gross nearly $57 million in its worldwide theatrical run on a budget of $25 million, making it a financial success. 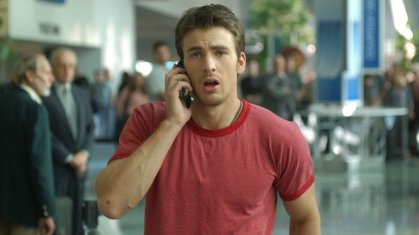 One of the first things I noticed about “Cellular” is that there is lots of product placement throughout the movie, particularly from Nokia. However, plenty of other brands are prominent throughout the film, to the point that it is a little bit distracting. Judging from some of the reviews I have seen, this left a bitter taste in a lot of people’s mouths, and I can’t really blame them for that.

The central cast of Jason Statham, Chris Evans, and William H. Macy is really solid in this movie, and they all play their roles quite well. Kim Basinger wasn’t nearly as impressive in my opinion, but most of her performance was literally phoned in (ha). In all seriousness, her role kept her in one gear throughout the whole film, so she didn’t really get to show off any acting talent in the movie.

“Cellular,” by nature of being a tech-based story, feels really out of date now. I feel like “Phone Booth” got around that problem in the way it acknowledged the way technology was changing, which isn’t something that is done in “Cellular.” It is almost comical now to think that it wouldn’t occur to a police officer that phones can take video, which is integral to a major plot twist in the story. All of that said, the story of “Cellular” hasn’t aged nearly as bad as any of the 1990s cyber-thrillers.

One of the biggest criticisms I have seen of “Cellular” is that the story repeatedly goes beyond what is believable, but honestly, who cares? I don’t understand what was expected of this action movie for people to be so harsh on it for being unrealistic.

One of the staunchest supporters of “Cellular” against the wave of negative reviews was Roger Ebert, who wrote highly of it in his 3 1/2 out of 4 star review:

The plot of “Cellular” sounds like a gimmick, and no wonder: It is a gimmick. What’s surprising is how convincing it is, under the circumstances, and how willingly we accept the premise and get involved in it. The movie is skillfully plotted, halfway plausible and well acted; the craftsmanship is in the details, including the astonishing number of different ways in which a cell phone can be made to function — both as a telephone, and as a plot device.

This is one of the year’s best thrillers. Better than “Phone Booth,” for my money, and I liked that, too.

Personally, I don’t think “Cellular” holds a candle to “Phone Booth,” but it is serviceable and interesting as a concept and for simple entertainment. Some seem to think that it slows down too much, but I think it maintains a steady pace throughout that will keep most from getting distracted. It is a little better than middle-of-the-road as an action movie, which I think is good enough for most people. If you really like Statham or Evans, this is one worth checking out. If you were a big fan of “Phone Booth,” I’d say it is a must-see.