Next up in the Larry Cohen Collection is 1987’s “Best Seller,” starring James Woods and Brian Dennehy.

“Best Seller” was directed by John Flynn, who also made “Brainscan,” “Out for Justice,” “Lock Up,” and”Rolling Thunder.” His primary style has always been crime-based action-dramas, which fits well with Larry Cohen’s flair for police procedural.

The original screenplay for “Best Seller” was, of course, written by Larry Cohen. However, John Flynn may have considerably modified himself it before filming, but wasn’t ultimately given a writing credit. He also apparently came up with the title, which was originally “Hard Cover” (which I think sounds way cooler).

The musical score for “Best Seller” was provided by Jay Ferguson, who also scored flicks like “Double Dragon” and “Tremors II.” 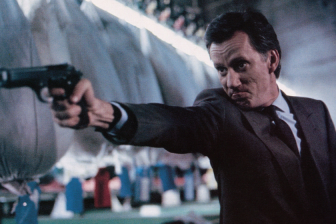 “Best Seller” was distributed by Orion Pictures, which was behind a handful of well-regarded flicks throughout the 1980s and early 1990s before falling into bankruptcy. Such features included “RoboCop,” “Amadeus,” “Mississippi Burning,” “Dances With Wolves,” and “The Silence of the Lambs,” but also turkeys like “RoboCop 3,” and “Car 54, Where Are You?.” Former head and co-founder of Orion, Mike Medavoy, has a pretty great book out there called “You’re Only As Good As Your Next One” about his experiences in the industry (which included stints with United Artists and TriStar as well as Orion) that I highly recommend picking up for movie trivia junkies.

The story of “Best Seller” follows a cop-turned-author who is pulled into a massive conspiracy by a former hitman looking to tell the story of his career working for a corrupt politician.

The reception to “Best Seller” was pretty mixed: it currently holds Rotten Tomatoes scores of 67% (critics) and 54% (audience), along with an IMDb rating of 6.5.

I couldn’t dig up any budget numbers for “Best Seller,” but it ultimately grossed just under 4.3 million in its domestic theatrical release. That is hardly Earth-shattering (or best-selling), but if the budget was low enough, it may have been profitable.

Personally, I wasn’t sold on Brian Dennehy as the lead here. There are plenty of cop-style character actors out there that I think would have fit better, like Robert Davi or Tom Atkins. However, he is definitely physical intimidating at times, which I assume was the reason for his casting. James Woods, on the other hand, is thoroughly awesome here. He blends his peculiar charm with a sense of menace to create a likable yet dangerous character who is clearly capable of snapping into violence at a moment’s notice. The chemistry between the two actors is pretty good, but the rest of the cast comes up a bit short. The antagonists just aren’t intimidating or large enough to feel like the massive threat that they are supposed to be.  Also, the daughter character comes off as having no depth or practical intelligence with her minimal screen time, and winds up inexplicably running into the arms of a guy who just shot her father for no clear reason, other than to create a hostage situation. She also accepts rides in cars from mysterious figures, like she is the lead in a stranger danger PSA.

The story pacing to “Best Seller” isn’t great: the tension is built pretty well, but it is never quite clear how much time has elapsed, how close the book is to being finished, or how near the story is to a climax or resolution. It feels more like a simmer than the tension of a burning wick, with no clear ending ever in sight. The lack of a clear finish line (book publication? how many drafts is that going to take?) really hurts the plot, but it is still a pretty good thriller regardless.

Roger Ebert brings up another issue with the movie in his perhaps excessively scathing review of the film:

If there’s one thing I can’t stand, it’s a movie about a character who is slow to catch on. When I’m watching a movie and something is perfectly obvious and the hero persists in not understanding it, my frustration grows and I want to shout advice at the screen. “Best Seller” has a character like that, played by Brian Dennehy, an intelligent actor who usually plays characters who are fairly swift. Not this time.

Ebert certainly has a point, and it is something that I noticed while watching the movie. However, I assumed most of his reticence about the conspiracy was more because of his suspicions and unease with James Woods rather than him not catching on with the clues, though he has one or two lines (“corporations don’t kill people” / “I don’t believe that someone could destroy police evidence”) that either reveal an immense naivete or a flaw in the character writing.

The ending credits song for “Best Seller,” called “Perfect Ending,” is absolutely ridiculous, and sounds like an honest buddy cop love theme. Everything from the melodramatic lyrics to the guitar riffs to the synthesizer background work is just off the charts wacky in the best possible way. It seems like the sort of song that would have fit into something like “Dead Heat” or “Samurai Cop.”

Overall, “Best Seller” is a flawed but entertaining flick. There are some things to like about it, and some things that don’t click. It doesn’t belong in an elite category for the genre, but it is worth giving a shot for James Woods, who gets to show off a bit here. Also, that ending song gave me a solid belly laugh.