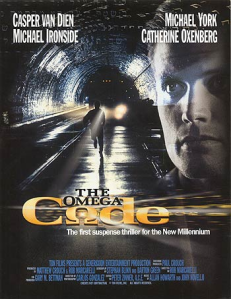 “The Omega Code” is pretty much what you should expect of a theatrical release by the televangelist extraordinaires at the Trinity Broadcasting Network. It is a conservative, evangelical trash script played out by mediocre actors under the hand of an incompetent director, all for the lowest possible cost (and it shows). “Omega Code” in particular plays off of the popularity of conspiratorial thinking and the general public anxieties surrounding the year 2000. The plot is focused around the thoroughly debunked conspiracy theory of “The Bible Code”, and (of course) the book of Revelations. The movie covers all of the Christian apocalypse themes that you would expect, with some conservative talking points thrown in for good measure (the UN is totally horrible, you guys). Just going by the Christian apocalypse beats, there’s the makings of a half-interesting end-of-the-world movie here, admittedly. However, this attempt was pretty badly whiffed on a number of fronts.

First off, the screenwriting is horrible. The dialogue is all excessively heavy-handed, every line oozing with self-importance. Nothing is subtle or inconspicuous at all, and that problem starts with the words that are on the page. The plot becomes completely unbelievable pretty damn quickly, unless you live in a conservative fantasy-land of constant fear. Part of the blame there has to go to the directing and the acting, but I don’t know how anyone could have made this script acceptable without dramatic re-writing. That said, the acting isn’t getting off without a mention.

I’m not sure whether I love or hate Michael York’s performance in this movie. He goes from half-likable politician to mustache-twirling villain in a heartbeat, but does play a hammy evil role pretty impressively. Still, it is impossible to take Austin Powers’s boss seriously as (spoilers) the Anti-Christ. He is just way too over-the-top and goofy throughout the movie to consider a legitimate villain, and moments where he is supposed to come off as menacing play out as ridiculous. However, at least he isn’t Casper Van Dien. Or, to a lesser extent, Michael Ironside. Ironside, for one, is completely wasted in this movie as a one-dimensional B-villain who mostly exists to fire guns (occasionally) and smoke cigarettes (menacingly). He must have gotten a hefty paycheck, otherwise I can’t imagine why he would have considered this bit role. Van Dien, on the other hand, is given far too much responsibility in this film. The whole movie is essentially resting on his shoulders, which is an apocalyptic plan if I’ve ever heard of one.  His acting, as usual, is just abysmal. His line deliveries are awful throughout the movie (I wouldn’t rely on him to deliver a pizza), and whenever he is depended on to really show his capabilities, he reveals his internal vacuum of talent to the world. Early on in the movie, his character is giving a motivational speech, which is supposed to set the tone and background for his character (as well as the premise for the movie). He needed to really convince the audience of his charisma and speaking abilities in that scene to sell his character, and he fails quite astoundingly. It essentially starts the whole movie off on the wrong foot.

To the movie’s credit, the special effects are not horrible for the financial constraints they were working with (the finale still looks pretty crappy, but I won’t harp on it). However, that’s definitely semi-polished brass on the Titanic that is this movie. The acting and writing in particular just drag this whole production down, to the point that it has sort of a cult following as a good-bad movie. In any case, it certainly failed in its intent to evangelize to the conspiracy theory crowd. The movie did its damnedest to do so though, injecting unnecessary computer-magic and millennium-related bits into the background here and there. In particular, the final shot of the film mentions the millennium as a new beginning (after Satan is defeated and all that jazz). The movie did do pretty well in the South preaching to its own choir, not unlike “God’s Not Dead” and a handful of other evangelical religious movies over the years. However, it has cemented itself as a bargain bin staple in recent years, right next to all of the Kirk Cameron “Left Behind” films. It did manage to spawn a comparably crappy sequel, which I intend to check out sometime in the near future. 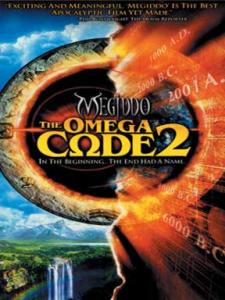 “The Omega Code” was briefly in the IMDb Bottom 100 some years ago, and still boasts an impressively low IMDb score at 3.4. I’m not super-surprised that it isn’t down there any more, as religious movies sort of live in their own dominion that most just try to ignore. At the same time, they do have their target audience, and those folks are going to relatively inflate the scores for movies like “The Omega Code” on any democratic ranking sites (such as IMDb). The movie certainly has a low enough quality to dwell in the Bottom 100, but not too lowly I don’t think. Little things like sound editing, cinematography, and continuity were adequate, which gives it a leg up on films like “Birdemic” and the MST3k movies in the Bottom 100 ranks. There is some fun to be had with this movie, but it isn’t on the top of my list for a good-bad watch.