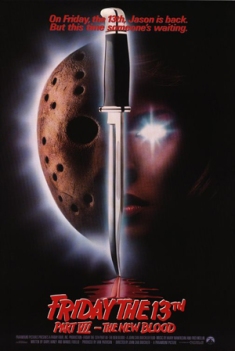 Today’s feature is Friday the 13th Part VII: The New Blood, in which Jason Vorhees faces off against a telekinetic heroine.

Friday the 13th Part VII was directed by special effects guru John Carl Buechler, who also directed the movies Troll and Ghoulies Go To College. His special effects credits included movies like From Beyond, Dolls, The Garbage Pail Kids Movie, Carnosaur, The Gingerdead Man, and Robot Jox, among many others.

The cinematographer for the film was Paul Elliott, who also shot Fat Albert, My Girl, and 976-EVIL, and provided camera work on Legion, No Country For Old Men, True Grit, Trick or Treat, Saturday the 14th, and Humanoids From The Deep.

The music for the movie is credited to two people: prolific horror score composer Harry Manfredini (Jason X, Wolves of Wall Street, DeepStar Six, House, Friday the 13th, The Omega Code, Slaughter High, Wishmaster, Swamp Thing) and Fred Mollin, who would return to do the music for Friday the 13th Part VIII.

Friday the 13th Part VII was the first Friday the 13th movie to feature Kane Hodder as Jason, who is now the most popularly associated actor with the role. He was already an experienced stunt coordinator, and provided his own stunts in the film.

Most of the music used in the film is recycled from the previous movies in the franchise, which is why Harry Manfredini is given a music credit. The few original compositions that were used were provided by Fred Mollin, who shares the music credit.

The original vision for the movie was to pit Jason Vorhees against Freddy Kruger, but New Line Cinema and Paramount Pictures weren’t able to figure out the logistics behind the scenes. However, the ending of Friday the 13th Part IX officially combines the universes, and sets up their eventual confrontation in 2003’s Freddy vs. Jason. Due to the lack of Freddy Kruger, the screenplay for Friday the 13th Part VII was eventually written for a Carrie-like telekinetic adversary instead.

Jason X, the tenth film in the franchise, re-creates an infamous death sequence from Friday the 13th Part VII, in which Jason traps a teenager in their sleeping bag and slams them repeatedly against a tree.

Reportedly, it took nine re-submissions with new cuts in order for Friday the 13th Part VII to get an R rating from the MPAA ratings board, which was dead set on giving the film an X. Because of this, a number of death sequences were left on the cutting room floor.

The writing work done for Friday the 13th Part VII is a bit of a mystery. The initial writer of the screenplay, Daryl Haney, was dismissed early in the production, and all of the rewrites are credited to an apparent pseudonym, Manuel Fidello.

The budget for Friday the 13th Part VII was under $3 million, on which it grossed over $19 million domestically in its theatrical run.

The reception to Friday the 13th Part VII was generally negative, though it has a bit of a cult following among horror fans now. It currently holds a 5.2 rating on IMDb, along with Rotten Tomatoes aggregate scores of 26% from critics and 38% from audiences.

Personally, I think that Friday the 13th Part VII deserves some credit for doing something a little different with the franchise. In all of the previous entries, Jason had never had a real challenger before with any kind of otherworldly or paranormal powers. While Tommy Jarvis was able to get the better of him twice, he is definitely just a human, and wasn’t a toe to toe match for Jason. Tina, on the other hand, has the destructive powers of her telekinesis, which she uses to physically challenge Jason.

The effects team for The New Blood clearly had a blast thinking of ways to use Tina’s telekinesis to fight Jason, and the powers certainly opened up a lot of new doors and possibilities for deaths and effects. Personally, I am a big fan of the entire sequence where Tina essentially collapses a house in on top of Jason with her powers.

It is pretty evident that the MPAA ratings cuts hurt the movie significantly. A lot of the draw for the Friday the 13th franchise films are the creative deaths and effects work, which is primarily what got cut and minimized in order to get an R rating. I doubt that the uncut version would have fared tremendously better with audiences, but it would almost certainly have worked better for die hard fans of the franchise.

The appearance of Jason under the mask in The New Blood is really strange and demonic, more so than he is in the other movies. While Jason’s appearance varies somewhat from movie to movie, he is usually more zombie-like and decayed than demonic. Whether you dig his look here or not, it certainly stands out as one of the most memorable faces of Jason in the franchise. 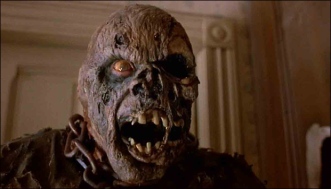 3 thoughts on “Friday the 13th Part VII: The New Blood”